Time to Dust Off the Good Stuff 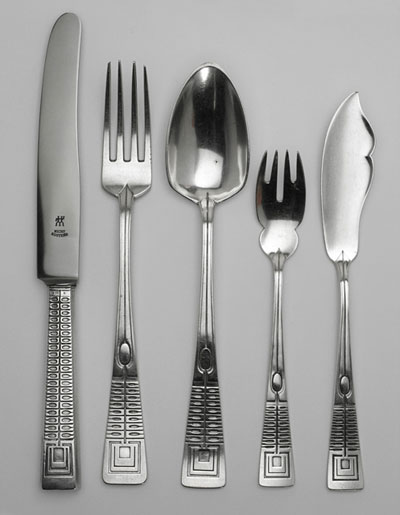 We may be here in body today, but our minds are already on tomorrow’s feast. We’ll be back next week for a look at the connections between Shaun El C. Leonardo’s Bull in the Ring and Thomas Eakins’s Wrestlers, an update on Craig Kauffman’s Untitled Wall Relief, and a few other posts we’re cooking up.

Patrick Dougherty at the Arboretum 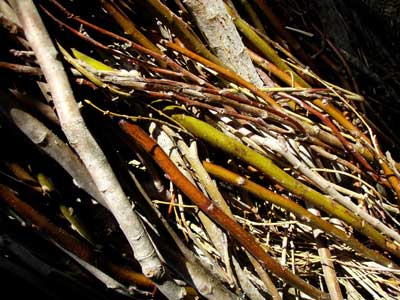 Recently the stick was inducted into the National Toy Hall of Fame for its natural greenness, simplicity, and the infinitely imaginative ways it can be played with. The stick is at once a light saber, a magic wand, an instrument—and, for environmental artist Patrick Dougherty, an art material used for making his large, elaborate, woven sculptures. (If you’ve passed by the Max Azria store on Melrose you’ll know what I’m talking about.)

Dougherty’s Catawampus, installed at the Los Angeles County Arboretum, is a giant, interactive, willow structure evocative of childhood hideouts and fairytale forts. Made from saplings, the supple but strong branches come together to create a series of rooms equipped with doorways and windows for walking in, crawling through, or peeking out. 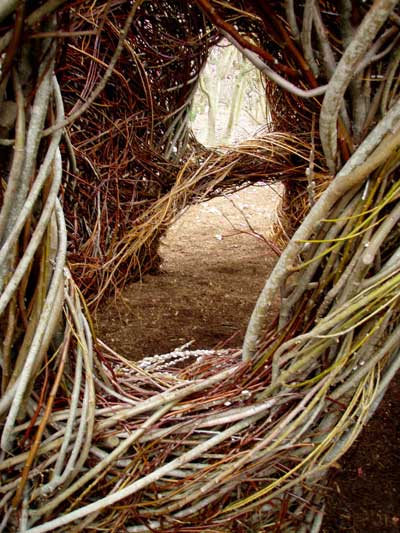 The playfulness of the structure is balanced against the environmental/sculptural aspects of the work of art. Every angle has a different texture, color, and perspective that all change as the sculpture weathers over time. Catawampus will be installed indefinitely, so you can visit many times and witness how it takes on a new life of its own.

One of the benefits of working at LACMA is having the opportunity to meet and collaborate with creative, interesting people who make the museum hum, like our Director of Special Projects, Erin Wright. Not only does Erin have one of the coolest jobs around—overseeing and shepherding artist projects through—but she’s also living the dream (or at least my dream; see her last answer) outside of the museum. Here, she lets us in on a few limited editions that just became available, and explains how she found herself to be the only American amongst a group of Germans in Texas.

What was your path to LACMA?

I studied art history at Simmons College and after graduation managed a photography gallery, Robert Klein, in Boston. I then went on to Sotheby’s working in client services and marketing. My next endeavor was an internship at the Chinati Foundation, a museum founded by Donald Judd, which then led me to the Lannan Foundation in Santa Fe, New Mexico. Lannan supported a number of Dia Art Foundation projects and was how I first began working with Michael [Govan]. After that I moved to Los Angeles and went to work for Gagosian Gallery as an editor on the Ruscha Catalogue Raisonné of Paintings. I joined LACMA in the fall of 2006.

That’s such a rich background—is there one experience that stands out above all the others?

My internship at the Chinati Foundation was one of my most interesting experiences. I lived and worked at Chinati for three months with none of the usual distractions—no television and no cell phone—and was, for a while, the only American among a group of German artists and interns living in Marfa, Texas.

Sounds intense. Was there an artist whose work you ended up particularly excited about having spent so much uninterrupted time with it?

I had always been a fan of Dan Flavin’s work but while I was at Chinati there was a special exhibition of his drawings and I was astounded at how extraordinary they were. I was able to spend a lot of time with the drawings and they gave me new insight into his work which was thrilling.

What are some of the projects you’re working on now?

I just finished working on a project with the Jorge Pardo Studio. When Jorge was creating his design for our art of the ancient Americas galleries, he found a pre-Columbian object that he thought would be fantastic to use as a model for a limited edition piece. We took a 3-D scan and Jorge re-envisioned it as a lamp. 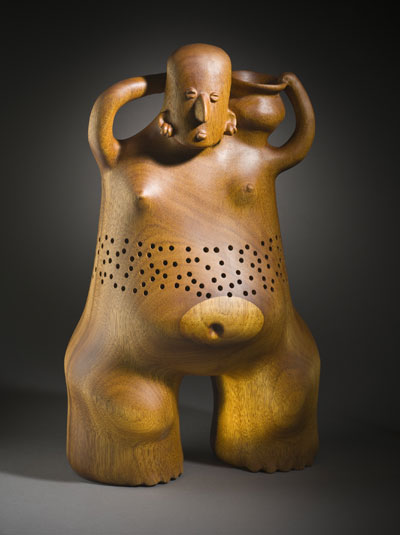 Is the lamp available to the public?

Yes, it’s available though the website and is currently on view in the LACMA store where it can also be purchased. It’s in an edition of twenty and will sell for $18,000. I’ve just finished another edition that is a little more affordable—a print with the artist collective Machine Project made in conjunction with the Machine Project Guide to LACMA event we had a few weeks ago.

Tell us about the print.

It takes the form of a sestina—a highly structured poem form popular with the European troubadours of the twelfth century—and features list of ideas that never made it to our event because they were too dangerous, foolish, over-ambitious, nonsensical, or just unsuitable, such as child docents and escalator skiing. It’s printed by Aardvark Editions and retails for $95. It is an edition of 250.

Aside from these projects, what are you most excited by at LACMA right now?

I know your husband, Joe Sola, who actually just wrote a blog post for us about Matthew Barney’s Cremaster, has work in the show (which, I want to note, the curator selected well before ever knowing of your connection).

Yes, there are two pieces. One is an older work called St. Henry Composition and the other was made for the show entitled In the Woods.

I was mesmerized by St. Henry Composition, in which he repeatedly subjects himself to getting tackled by football players. Is this sort of physicality typical of his work?

When he’s not getting tackled or run over, and you’re not working on limited editions, what are you two up to?

At the moment, desperately trying to complete the Escher GuneWardena house we’ve built in Mount Washington.

Is there someone else at LACMA you want to know more about (or something for that matter)? Just let us know and they might appear on Unframed soon.

Yesterday, Devi wrote about Millard Sheets. Most of us know him as the artist from the 1920s and ’30s whose work offered gritty yet expressive depictions of Bunker Hill in downtown L.A.—LACMA has several of his works in our permanent collection. Less known, however, is that Sheets’s abilities as an artist had a profound influence on the architecture of L.A. 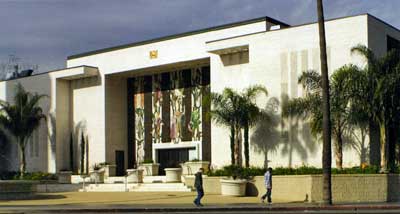 Though he had no formal training or credentials as an architect, Sheets owned a design and architectural firm called Millard Sheets Design Inc., for which he oversaw all of the design and construction of the buildings they worked on, which included more than forty Home Savings of America bank branches (currently Washington Mutual) in Southern California.

Sheets’s guiding principle in architecture was to conceive “buildings that will be exciting seventy-five years from now,” according to the artist in an interview given for the Archives of American Art at the Smithsonian Institution. Each building was unique, site-specific, and often adorned by large-scale mosaics, meant to reflect California history, the progress of mankind, family life, and local landmarks.

His most famous structure was completed in 1968 on the corner of Sunset and Vine. Built on the original location of Hollywood’s first full-length motion picture, the building is adorned with a mural depicting legendary movie stars from Hollywood’s Golden Age.

What do you do?
I’m an actress—I’m in Wicked.

Has a piece of art ever made you laugh or cry?
I had a piece of art that made me laugh today. It was a portrait of Arnold Schwarzenegger [in the Vanity Fair exhibition]. I thought, “Look at the governator!”

What do you do?
Research director for a TV network in Canada.

What are you reading right now?
Would you believe the Seven Pillars of Wisdom by T.E. Lawrence. It’s a bit unusual. 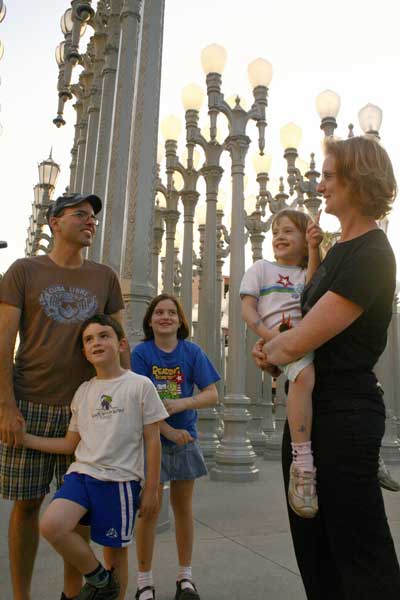 What do you do?
Gabe: We’re both lawyers for the federal government. We live in Washington.

If you were a piece of artwork, which one would you be?
Olivia: I know, I would be Mona Lisa, because I like Mona Lisa and I think it’s a cool painting.

Margie: I think I’d be Winged Victory. She’s powerful and elegant and strong and I’ve been thinking about her a lot.