Pato Hebert at the California Biennial

Visitors to the California Biennial (on view at the Orange County Museum of Art through March 15) view a cacophony of yard signs, similar to some busy intersections in the weeks prior to elections, as they approach the museum. Yet rather than showcasing the names of candidates, the signs contain phrases such as “Ingenuity is a form of survival,” “I feel vulnerable when I’m lied to,” and “We’re most honest when it’s too late.”

This installation, Text Messaging: 1,000 Points of Might by Los Angeles artist Patrick “Pato” Hebert, represents an important approach in Hebert’s work that often involves the participation of others, either during the creation of the work or in the activation of the work after it has been installed. The texts on these signs, for example, were created when Hebert presented prompts to different groups of young adults throughout Southern California.

Last year Hebert also initiated a text-based and participant-driven project with Plasencia Elementary School as part of Art Programs with the Community: LACMA On-Site. Following a series of conversations at the school, students and teachers responded to prompts to share their ideas about the school, their homes, and art. A selection of their thoughts was compiled as a t-shirt design; the t-shirts were then distributed to the Plasencia community during their arts festival last June.

As Hebert and Plasencia teachers discuss additional ways to grow their project, LACMA works such as Valeska Soares’s Untitled (Sin título) and Stuart Davis’s Premier are touchstones for discussing ways artists use text and how students develop connections with letterforms and words. 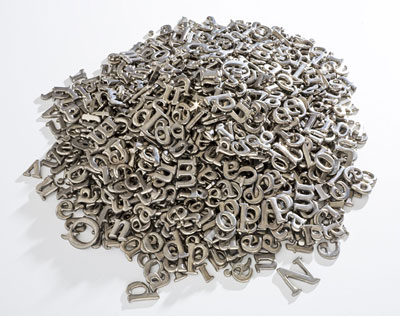 This entry was posted on Tuesday, February 3rd, 2009 at 6:00 am and is filed under Uncategorized. You can follow any responses to this entry through the RSS 2.0 feed. You can leave a response, or trackback from your own site.