British fashion icon Bruce Oldfield once said, “Fashion is more usually a gentle progression of revisited ideas.” In the case of nineteenth-century Iran and the French tutu, this certainly holds true. During a trip to Europe, Nasser al-Din Shah, the Qajar dynasty ruler of Iran during the second half of the nineteenth century, attended a ballet performance and found himself captivated by the ballerina’s costumes. He returned home with a prototype in mind. While ballerinas graced the stages of Paris on point, clad in opaque tights and tulle tutus, offstage in Qajar Iran, woman of the Shah’s harem were provided with a reinvented tutu, fitted to their modest haute couture desires hundreds of miles away.

Contemporary Iranian artist Shadi Ghadirian captures this unique twist of style in her Qajar Series (1998), on view on the top floor of the Ahmanson Building through the end of this month. In this series of thirty-three photographs, she dresses friends and family in vintage or remade costumes in the traditional style during the Qajar dynasty, and many of her models fashion a slightly altered version of a tutu. Not stiff and vertical like the customary French tutu, this adaptation is soft and unassuming, draped on top of their Qajar-style clothing. Ghadirian juxtaposes her subjects with everyday objects from the modern world, such as a Pepsi can or a Hoover vacuum, to accompany them in their portraits. 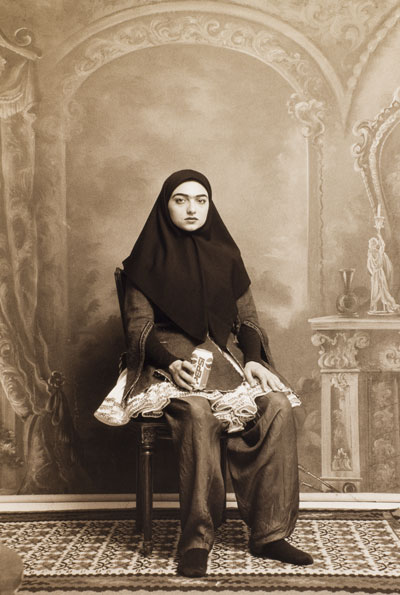 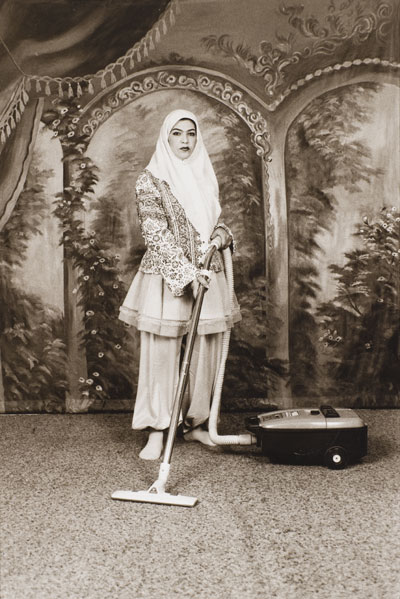 The result: an image that itself is a contrast of modernity and tradition; of two worlds meeting in a fabricated setting created by the artist. The Qajar-style tutu is, in a sense, a similar creation to Ghadirian’s contemporary portrait series. It is also an intersection of two dissimilar worlds. Moreover, it is a revisited idea and a progression of another’s design. At most, it is duality and contradiction, and at the very least, perhaps it is just fashion.

This entry was posted on Thursday, March 12th, 2009 at 6:19 am and is filed under Uncategorized. You can follow any responses to this entry through the RSS 2.0 feed. You can leave a response, or trackback from your own site.

One Response to Shadi Ghadirian Refashions the Tutu