Every year for the last twenty-four years LACMA has held its annual Collectors Committee event, in which donors come together as a group to purchase works for LACMA’s collection (something we’ve written about before). I’ve had the chance to attend a few of these now, and they’re always fascinating. Here’s the premise of the event: curators from various departments each present an artwork they’d like the museum to acquire. The members of the Collectors Committee get to see the objects installed in a gallery and hear the curators give presentations about the works—and then they vote on which objects LACMA will acquire, using a pool of funds created by their membership dues.

This year’s event took place on Saturday, and the results are in: LACMA has acquired a monumental painting by Matta, Burn, Baby, Burn (L’escalade); and a collection of 117 African Kuba textiles from the late nineteenth-early twentieth centuries.

Burn, Baby, Burn is a massive painting—nearly ten feet tall by thirty-two feet wide. It was created in 1965–66 as a response to the Vietnam War and the Watts riots, and remained part of the artist’s personal collection until his death in 2002. The mural-like painting draws the eye every which way; writing about the painting, curator of Latin American art Ilona Katzew said, “Like Picasso’s Guernica (1937)—a work that Matta greatly admired—Burn, Baby, Burn is a bold indictment of the destructiveness of mankind and a manifesto for peace.” 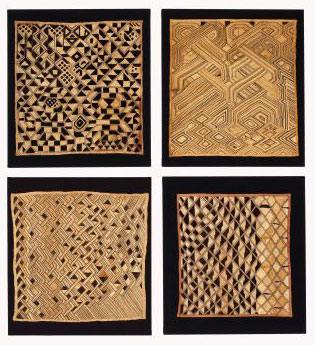 Four examples from the collection of Kuba textiles, Democratic Republic of Congo, gift of the 2009 Collectors Committee

The collection of African textiles, from the late-nineteenth/early-twentieth century Kuba culture of the Democratic Republic of Congo, helps enhance an important area of the museum’s collection. The 117 textiles and ceremonial skirts each feature unique geometric forms and rhythmic patterns, and were created collaboratively by both Kuba men and women. Within the culture these textiles were of the utmost prestige—traded as currency, given to kings as tribute, and used in ceremonial garb. In her presentation to the Collectors Committee on Saturday morning, curator Sharon Takeda told the story of twentieth-century missionaries who had come to the Congo offering the Kuba king a motorcycle as a gift, hoping to impress him with this magnificent feat of technology. The king paid the motorcycle no mind, but was captivated by the pattern of the tire tread left in the dirt, hoping to incorporate it into a textile pattern.

Since 1986 the Collectors Committee has made 159 acquisitions for the museum, including works by Benedetto Luti, Edvard Munch, George Bellows, Man Ray, and many more. Their support over the years has been essential to the growth of the museum’s collections—all the more so in today’s economy. Having just entered our collection two days ago, these new acquisitions aren’t yet on view; we’ll let you know as soon as they go up.

This entry was posted on Monday, April 27th, 2009 at 6:43 am and is filed under Uncategorized. You can follow any responses to this entry through the RSS 2.0 feed. You can leave a response, or trackback from your own site.