In the communications department the other day we were talking about two-part exhibition titles, and especially those two-part titles where the first part acts as a thematic signifier and the second part zeroes in on what the show is about. You know:

Against the Grain: Contemporary Art from the Edward R. Broida Collection

To War, To War: Military Portraits of Freedonia

Okay, the last one is made up, with help from the Marx Brothers. Anyway, we thought it would be fun to find some actual two-part titles from LACMA’s past, separate the parts, mix them up, and see if you can put them together correctly. Just match the title beginnings from the lefthand column with the corresponding endings on the right. Actual exhibition titles and years can be found after the jump.

END_OF_DOCUMENT_TOKEN_TO_BE_REPLACED

On Friday afternoon I received the following email from John Bowsher, whom you heard from on Unframed yesterday…

Ok so I just walked through the park coming back from lunch. I swear on a stack of artworks that I saw the mother wooly mammoth in the tar lake moving her head, and slowly moving in the water.

Is there some way you can confirm?

As you may know, LACMA is literally a few feet from one of the world’s most famous fossil localities, the La Brea Tar Pits, which is home to a number of fake prehistoric animals positioned in and around a big, bubbling lake of tar. I was certain John was yanking my chain about the wooly mammoth that we all walk past regularly, but after a few emails back and forth between us, he convinced me to go look for myself. And guess what—the beast was indeed moving. Check it out.

How can it be? END_OF_DOCUMENT_TOKEN_TO_BE_REPLACED

Q&A with John Bowsher, Director of Special Installations at LACMA 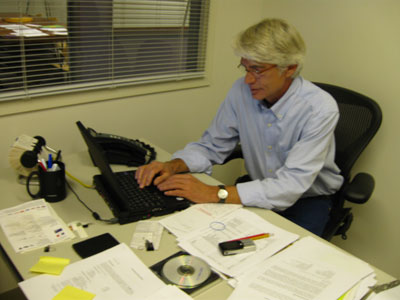 John Bowsher, director of special installations, was instrumental to the reinstallation of the B. Gerald Cantor Sculpture Garden (which we talked about on Friday). As a collaborator with artists, he certainly has one of the most interesting jobs at the museum. Here he tells us about his longstanding relationship with Michael Govan, about the 680,000 pound rock that’s on its way to LACMA, and about his favorite part of the sculpture garden.

Q: How would you describe what you do?
A: I help artists realize their ideas.

Q: What kind of training has prepared you for your line of work? I don’t suppose there’s a degree program for enormous artwork installation.
A: No, it’s one of those things that you learn on the job. I started as a carpenter at the Walker Art Center in Minneapolis, and over time my work evolved to include large objects and working with living artists.

Q: What came after the Walker?
A: When director Richard Koshalek moved from the Walker Art Center to MOCA here in L.A., he hired me. MOCA did a big Richard Serra show and borrowed three Richard Serra sculptures from Dia in 1998, and that’s how I got to know Michael Govan, LACMA’s current director and Dia’s former director. I worked at Dia for eight years, then came here to work on the installation of the two Serras installed in BCAM as well as other projects such as Chris Burden’s Urban Light.

Q: Do large-scale projects come with particularly large-scale problems?
A: Well, in 2010, we’re planning to bring Michael Heizer’s Levitated Slot/Mass to LACMA. It’s a granite boulder weighing 680,000 pounds, so that presents its challenges. Moving it will clearly be an enormous undertaking, but even looking under it to assess the structure of the rock is complicated when you’re talking about this scale. I guess you could say that the problems are simple but the solutions are complex.

Q: You just finished up a big project with Robert Irwin, the B. Gerald Cantor Sculpture Garden. What’s your favorite part of the reinstallation?
A: The Balzac sculpture—it keeps a watchful eye on Urban Light. 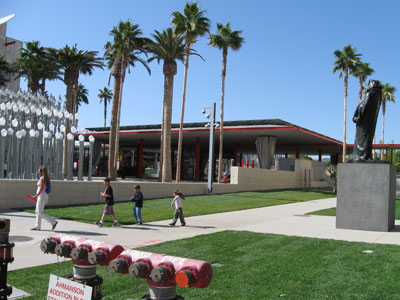 Q: What have been some of the most interesting projects you’ve worked on at LACMA?
A: Working on the feasibility study for Jeff Koons’s Train because it’s very complex. I have been working with engineers to determine if it is possible to authentically recreate a steam locomotive that has certain functions like steam, and wheel acceleration, and suspend it vertically from an actual crane.

Q: What’s been your most challenging installation to date?
A: It hasn’t happened yet—Michael Heizer’s Levitated Slot/Mass.

In 2005, in preparation for impending construction at LACMA, the B. Gerald Cantor Sculpture Garden was deinstalled. As we recently told you, we’ve been in the process of moving the sculptures—ten Rodins and three Bourdelles—back to their rightful home. They’re now on view, along with a few new additions from Robert Irwin, who has reenvisioned the space and introduced his palm garden into the area. 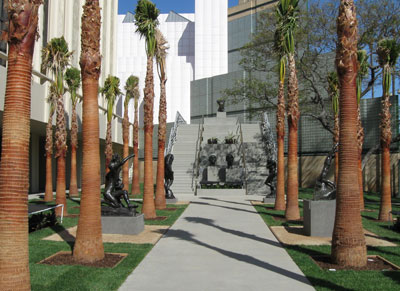 Though at first the palms, icons of L.A., might seem out of place with French sculpture, Irwin says it’s a time-honored pairing. When working on his plans for the garden, he presented LACMA staff with an old photo of Versailles that captured palms in the summertime alongside the palace. The French felt palms were to be treasured and they brought the trees out of greenhouses in warm weather to introduce an exotic element to the grounds.

Just out of the greenhouse into our own sculpture garden—a selection of Bromeliads, shown below.

They’re still covered as they have been living indoors for the past year and need to become acclimated to their new environment. Over the next three to four weeks they will gradually be exposed to more sun for their good health and welfare until finally the shades come off entirely. More on the sculpture garden on Monday from John Bowsher, director of special art installations, who helped Robert Irwin realize his vision.

It feels like it just opened yesterday—actually it was back in January—but Art of Two Germanys/Cold War Cultures is closing this weekend. Sunday is your last chance to see it, whether for the first, second, or third time. (With more than 300 works, it definitely rewards multiple viewings). From here, the exhibition will head to two venues in Germany: next stop will be the Germanisches Nationalmuseum Nürnberg,  on view from May 27–September 6; after that it’s off to the Deutsches Historisches Museum in Berlin, on view October 3–January 10 and coinciding with the twentieth anniversary of the fall of the Berlin Wall.

Whether you’ve yet to see it or you already have, you might also want to use the occasion of this closing weekend to check out the fascinating, in-depth timeline of the period covered in the exhibition, or to revisit some of the posts we’ve done here at Unframed, including looks at works by Dieter Roth, Thomas Schütte, and Gerhard Richter. There were also a few interesting posts by curatorial assistant Dorothea Schoene on the use of floral wallpaper in Richter’s Volker Bradke; by editor Sara Cody on working on the exhibition catalogue (also including a video interview with exhibition curator Stephanie Barron); and by photography curator Charlotte Cotton on LACMA’s acquisition of photographs by three East German photographers that are featured in the exhibition.

A Tale of Two Cities: Merging Emerging at MOCA Shanghai

Once known by European traders as the Paris of the Orient, Shanghai, China’s financial center and one of the world’s largest metropolises, is also a blossoming center for contemporary art. M50, the city’s avant-garde artist community, is gaining comparable recognition to Beijing’s trendy 798 Arts District. MOCA Shanghai, located at the heart of the city in People’s Park, is the first nonprofit, independently operated contemporary art institution in Shanghai. 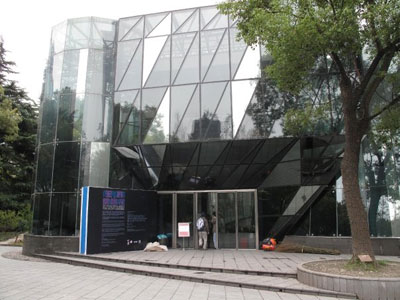 On my recent trip, I visited MOCA, which is currently showing the exhibition Merging Emerging: Art, Utopia and Virtual Reality. Among those artists whose work was exhibited, one in particular reminded me of L.A. 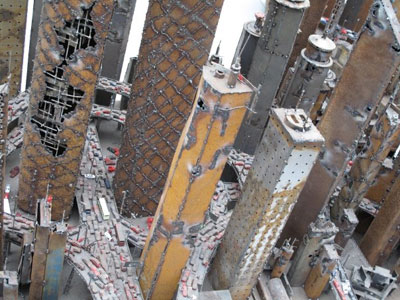 Zhong Kangjun’s City (2008), a diminutive rendition of Shanghai, offers an interesting combination of dystopia and wit. On the one hand, City, constructed out of iron, looking worn and dirty, reminds one of what Shanghai might look like in a state of complete dilapidation. On the other hand, navigating through this toy-land version of Shanghai actually feels possible and uncomplicated, a contrary sentiment to many foreigners’ experience. Miniature cars weave through traffic below, and above toy planes wrap around skyscrapers; urban activity seems to be pulsing almost as swiftly here as it does outside the museum doors.

While standing next to the “my-size” Oriental Pearl Tower, I thought of my city: Los Angeles. Also a city with a thriving contemporary art scene, Los Angeles shares in the big city ambiance of traffic congestion and buzzing activity. Looking at City I began to think about the urban energy in cities like Shanghai and L.A. that offers inspiration to so many artists; the yin to the yang of the natural world which likewise ignites artistic creation. Glancing at my watch, I realized it was almost time for evening rush hour in Shanghai. While I hustled through the sea of people in the subway, Los Angelenos were just waking up, sipping their morning coffees, and preparing to face the 405 freeway.

USA Today and Newsweek recently published articles on the decline of teaching formal cursive in elementary schools (block lettering is still mandatory). In order to prepare young students for today’s Digital Age, grade school curricula are showing a preference for keyboarding lessons over cursive. Both articles question the need for teaching formal handwriting in cursive from an educational, historical, and evolutionary standpoint. With students now only being taught formal penmanship approximately fifteen minutes a day in the third grade, I began to wonder how this would affect visual art. Take for instance this work: 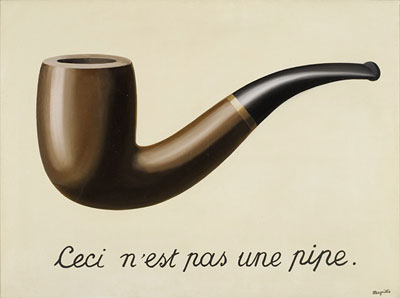 Written in French, the letters in René Magritte’s La trahison des images (Ceci n’est pas une pipe) (1929) can be identified by the reader. An accompanying gallery label would aid further in translating the text. But with more and more students less inclined to write in cursive at a young age, one can’t help but also wonder how well they would visually identify and comprehend it. The text of this work is crucial to the point the artist is trying to make about the perception of visual art.

As mobile phones and computers become the main forms of communication nowadays, is this a sign that English cursive is actively on its way to hieroglyphic status? Fortunately we still have time; canvases aren’t optioned with an electronic signature just yet.