As the dog days of summer slip away, we thought we’d take this opportunity to slip away ourselves. Unframed will be taking the week off for a little rest and relaxation. To tide you over, we’ve gathered up some of our favorite Unframed posts of the summer.

We’ll be back next week fully recharged.

In response to Wednesday’s post on our new palm trees, we received a comment from Terry, who asked why we keep many of the palms in wood crates. I checked with John Bowsher, director of special installations, who told me that the reason some of the palms are in boxes is because there are structures beneath—a basement, a loading dock, and in one case, a large storm drain—that don’t allow proper soil depth for the palms to grow. The crates themselves are standard issue, but I learned from John that Robert Irwin actually appreciates their shape so much that he’s having Cor-ten steel versions fabricated for the area around the Resnick Pavilion, which will open next year. Regular readers might recall that one of our conservators, John Hirx, happened to write at length about the material just a couple of weeks ago, as it’s the same material Richard Serra uses in his sculptures. Twenty palms are slated to reside in the new crates. A model should arrive in the next few weeks and I’ll share a picture of it with you if I can.

With Five Centuries of Indonesian Textiles set to close on September 6, I made a point to revisit the galleries to take in the craft behind these beautiful objects—especially the batiks. 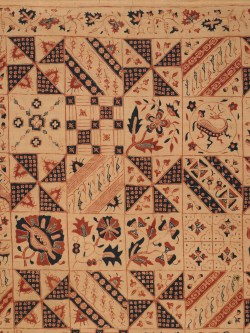 The process of making batiks is an extensive one, practiced for hundreds of years using a wax-resist dye method. After preparing the fabric with inked designs, wax is applied with a special canting tool,  then dyed in one color. Wax is then applied to other areas of the fabric and immersed into a different color dye. This process is repeated until the desired effect is achieved. Once all the colors have been applied, the excess wax is removed. Here’s a clip that illustrates the process:

Motifs typically designed on batiks are specific to nature—flora or fauna. While the tradition of batik-making is endemic to Indonesia, the influence of these textiles is widespread. This is evident in the LACMA installation; some batiks clearly depict characteristics from Indian, Chinese, and Arabic cultures.

Batiks can also be seen in contemporary art, though in this case not quite in its traditional form. Yinka Shonibare MBE, whose first solo exhibition on the West Coast was at the Santa Barbara Museum of Art this past spring, uses batiks as a clever means to express his critique on the effect of European imperialism and colonization. Using batiks popular in Africa which were appropriated by way of the Indo-Dutch trade, Shonibare creates costumes in typical seventeenth and eighteenth–century European fashion. Shonibare cheekily merges the aspects of culture of one country with that of another country once under its rule. (For those of you in New York, his work is currently on display at the Brooklyn Museum of Art.)

If you’ve been fortunate to see Shonibare’s works earlier this month or plan to see them on the East Coast, be sure to check out the batiks in their original form here at LACMA. The beauty of a batik in its traditional fashion is just as incredible as seeing it as an artistic medium veiled by an artist’s sly censure.

New Palms on the Block

In the last couple of weeks, some new plants have come to the Robert Irwin-designed palm garden, and a few others have been rearranged. For those of you unfamiliar with the project, a little background—prior to the opening of BCAM, LACMA commissioned Irwin to create an installation of palm trees that serve as a living art display and define the park areas of LACMA’s campus. As part of this project, which will continue to be developed over the next few years, Irwin systematically curated a grouping of exotic and tropical palm species from across the globe. Here are a few photos of the new kids on the block.

Director of Special Installations John Bowsher told me the Johannesteijsmannia Altfrons palm used to be reserved for nobility. Its fronds were used as umbrellas. 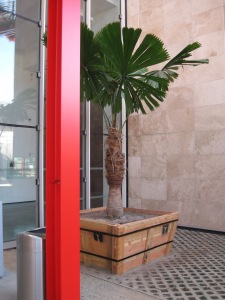 This palm, Licuala Ramsayi, native to the northern region of Australia, is actually an old friend. It resided in this space when BCAM opened, went to the greenhouse for awhile, and is now back. 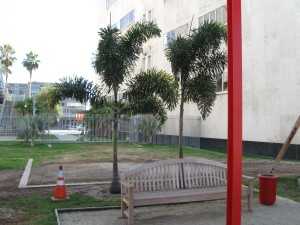 Not all palms can survive “the wind corner”—the open space between BCAM and LACMA West—but this variety of palm, Pritchardia Hildebrandii, should do well. The palms actually align with the sidewalk you see on the other side of the fence and with the two rows of Washingtonia Robusta. 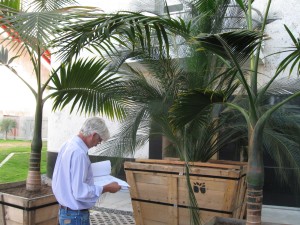 The center fern in this image is our most rare. It is fifty to sixty years old and not easy to come by at this ripe age.

This variety, Kentya, is John’s favorite palm. He likes the trunk and the gracefully arched leaves.

This Bismarckia Nobilis is my favorite palm. I love the silvery blue color. (John says this is why Irwin also likes this palm.)

Along with the palms, Irwin’s other medium is Southern California’s light, and the species of palms have been specially chosen to gather and reflect the interplay of light and shadow native to L.A. That interplay was really evident here as John and I returned to our offices.

Tom’s post yesterday about art and the “lattice of coincidence” really struck a chord with me. Just as he noticed a recurring Pompeii theme at MOCA and at LACMA, I’ve come across another subject that’s made a couple of simultaneous appearances around town. He’s more than mere subject actually; he’s a king. Louis XIV, to be specific. You can see him in the Getty’s current show, Cast in Bronze: French Sculpture from Renaissance to Revolution French Bronzes,  and you can also catch him on the third floor of BCAM, courtesy Jeff Koons. 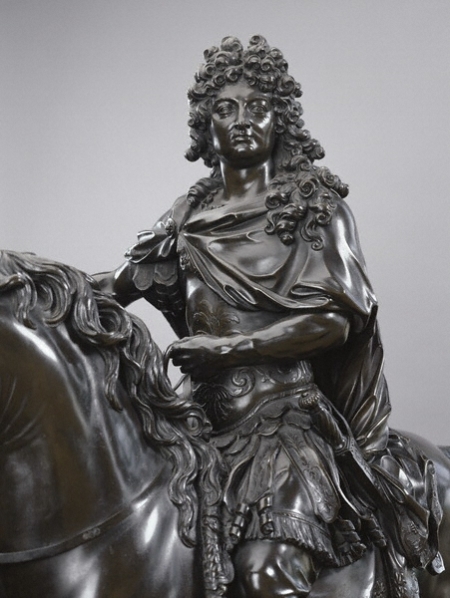 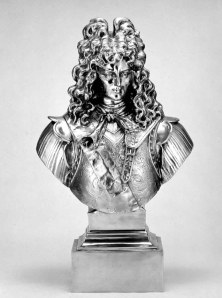 These depictions look a lot alike to me, though they are separated by centuries (1696 vs. 1986) and materials (bronze vs. steel). A quote from Jeff Koons, who made the sculpture on view at LACMA:

You may recall the “lattice of coincidence” theory from Repo Man—that, if you are thinking of a plate of shrimp, and someone suddenly says “plate,” or “shrimp,” or “plate of shrimp,” though it may seem meaningless, it’s “all part of a cosmic unconsciousness.”

I experienced this phenomenon the other day while seeing Collecting History, MOCA’s exhibition of acquisitions from the last five years. Our own show Pompeii and the Roman Villa was on my mind, and at MOCA I found not one but two works with “Pompeii” in the title.

Eerie, no? Or not so much? It seems artists have always found source material in the lost city. Pompeii and the Roman Villa has a section for artists who came along many centuries later (as recently as 2001) finding inspiration in the last days, the rain of fire, the excavated ruins.

Lucy McKenzie, “Cheyney and Eileen Disturb a Historian at Pompeii,” 2005, The Museum of Contemporary Art, Los Angeles, purchased with funds provided by the Drawings Committee, image courtesy of MOCA

One of the pieces in the MOCA show is Lucy McKenzie’s 2005 mural-within-a-mural Cheyney and Eileen Disturb a Historian at Pompeii. With its cool adaptation of the Tintin style and free association of historical elements, it seems to suggest a time warp more than a simple run-in between scholar and tourists. It’s a big inviting work and one of my favorites in the show.

Allan McCollum. "The Dog From Pompei," 1991. Cast glass-fiber-reinforced Hydrocal. Replicas made from a mold taken from the famous original "chained dog" plaster cast of a dog smothered in ash from the explosion of Mount Vesuvius, in ancient Pompeii, in 79 A.D. Produced in collaboration with the Museo Vesuviano and the Pompei Tourist Board, Pompei, Italy, and Studio Trisorio, Naples, Italy

If Lucy McKenzie uses present-day Pompeii as a setting for a mid-century illustrative style, Allan McCollum’s The Dog from Pompei* (1991) takes us very close to what actually happened at Pompeii in 79 AD. Using a contemporary mold derived from an original plaster cast made in 1874, McCollum has replicated many times over the form of a watchdog who died smothered in the ash that buried Pompeii.

The artist spoke in a 1992 interview about choosing the dog among other cast artifacts of Pompeii. “At first I was afraid of the drama of the thing. It seemed so incredibly overdramatic, dramatic beyond any necessity. But in the end I think I chose it because it is so poignant, so evocative. I mean, people have actually cried when they’ve seen it—when they see my copy of it.”

McCollum has also replicated dinosaur bones and sees a unique value in copies made by nature. “…I felt that if representation is a sort of alienating mechanism maybe these objects sort of corrected, or bridged, that gap, or naturalized the relationship between the copy and what the copy represents in some uncanny, symbolic way because they are naturally made copies.”

* McCollum uses the modern single-“i” spelling of Pompeii to emphasize that the mold for the work was made in 1991, from a second-generation cast found in the Museo Vesuviano.

A few weeks ago, Michele Urton, assistant curator of contemporary art, sent an email to staff members asking for their contributions of sleeping coins. We at Unframed were intrigued.

What are sleeping coins? For artist Haegue Yang, they’re forgotten change, sitting in drawers, gathering dust. (In Korean, Yang actually calls them “dust coins.”) Michele was collecting them for Yang’s Storage Piece (2004), an installation composed of crated and wrapped works by the artist, which is in the Your Bright Future exhibition. 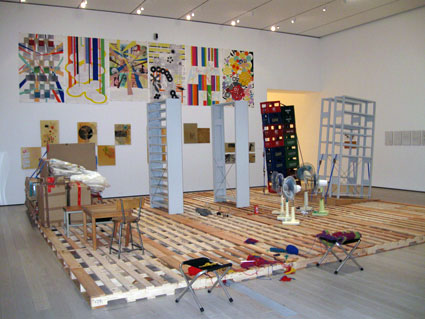 Storage Piece is on loan and the museum is obligated to return the installation to its owner in the condition it was received. To that end, in collaboration with the artist, we opted to collect our own coins for the work so as to ensure that the originals aren’t dismantled. 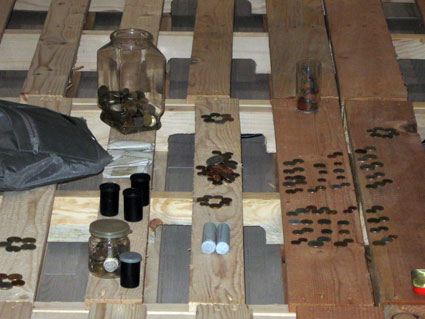 It’s one way the staff was able to be part of the experience, but the public can engage with Storage Piece too. Another component of the installation is knitting—Yang started a project pictured below which our visitors are welcome to add to. 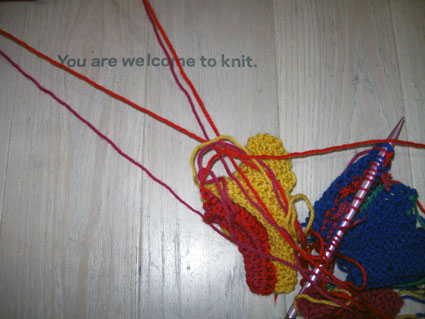