Reflections on the Decade: A Historic Acquisition for LACMA

From the perspective of the American Art Department, LACMA’s story of the decade is the museum’s acquisition of Wrestlers by Thomas Eakins (1844–1916). What made this particular acquisition for the museum so historic? The story begins in 2006 with the dream of a longtime, devoted LACMA donor to acquire for the American art collection a work of profound and lasting significance and the serendipitous, simultaneous availability of such a masterpiece with an art dealer in New York. Painted in 1899 by the outstanding realist painter of the late-nineteenth century, Eakins’s Wrestlers instantly met the criteria. In fact, when Bruce Robertson, former chief curator of American art at LACMA, first saw the painting, he admitted he got “weak in the knees” in the face of this great work and the rare and superlative opportunity it represented for LACMA.

Wrestlers is Eakins’s last completed genre painting, his last consideration of the male nude, his last sporting picture, and the painting the artist chose in 1902 as his diploma picture for the National Academy of Design in New York. Monumental in scale, Wrestlers would be united with the artist’s preliminary oil sketch for the painting, which had been in LACMA’s collection for more than fifty years. 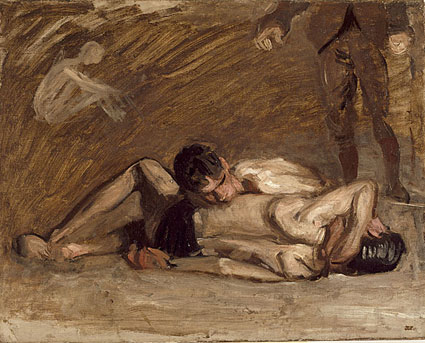 The acquisition of the finished canvas also would eliminate a serious gap in the American art collection, which had no major work by Eakins, a canonical artist within the history of American art. Most important, however, is the inherent quality and character of the painting. As Robertson explained, “a work of the magnitude and significance of Wrestlers unfolds itself to us constantly and always in different ways. Everybody will take something different away from it.”

Not surprisingly, the acquisition of Wrestlers at LACMA has reinvigorated the American art collection and American art history more broadly, inviting new interpretations of the artist and his career. Soon after it arrived at LACMA, it was lent to the international exhibition Art in America: 300 Years of Innovation at the Guggenheim Museum in Bilbao, Spain. In the Fall 2009 issue of the journal American Art, Robertson and LACMA curator Ilene Fort each published essays of their differing interpretations of the painting in a special feature entitled “Paired Perspectives.” Wrestlers also inspired and will be centerpiece of Fort’s forthcoming exhibition at LACMA: Manly Pursuits: The Sporting Images of Thomas Eakins, opening this summer—the first exhibition on Eakins and his art to be held on the West Coast since the 1940s and the first in Los Angeles since the mid-1920s.

This entry was posted on Tuesday, December 29th, 2009 at 6:00 am and is filed under Uncategorized. You can follow any responses to this entry through the RSS 2.0 feed. You can leave a response, or trackback from your own site.