There seems to be very little I can possibly say about Andrei Tarkovsky that hasn’t already been written, far more eloquently and astutely by the likes of J. Hoberman, James Quandt and Chris Marker (who’s One Day in the Life of Andrei Arsenevich will screen on the final Friday of our Tarkovsky retrospective, which starts this weekend). Just pick up a copy of 2008’s handsomely illustrated Tarkovsky and do a bit of leafing; or for a deeper plunge, try Robert Bird’s Andrei Tarkovsky: Elements of Cinema. There’s plenty on the internet, of course, so try the indefatigable Canadian website nostalghia.com; here, I’ll just signpost a personal favorite in the series.

The Mirror (1975) may be Tarkovsky’s purest expression. Largely unencumbered by narrative, it dwells and drifts freely through poetry, memory, newsreels, landscapes, and climates (wind-blown spring feels hard-won after the horizon-blanketing snows of winter). A house burns in a forest. A girl levitates. A woman wanders among massive reams of paper in a seemingly abandoned factory. To call it dreamlike is far too simplistic given that Tarkovsky’s cinema, with its prevalence of lengthy, crawling takes, lingers in an enigmatic present tense. His shots don’t so much span space as they alter the viewer’s sense of duration (the tree may not only be a sign in Tarkovsky’s cosmology but also a concrete representation of time itself). The camera floats through expansive realms that are earthy—Marker notes Tarkovsky’s affinity for grounding his figures in vast stretches of land with little space afforded to the sky—and where time is somewhat elastic or at least porous. Just look at the way figures amble within the frame or the different planes of action unfurl in fugues of simultaneity. Tarkovsky’s protagonists don’t so much take center stage, commanding their destiny, as they glide through a potent, waterlogged world, slipping into visions or reminiscences, pondering their place, and slipping toward magnificently sublime ends. In The Mirror, this lead isn’t an on-camera presence as much as an in-camera consciousness. And after nearly two hours inhabiting it, these memories will be your own.

When I found out that LACMA had been presented with seven rare examples of nineteenth-century Pueblo pottery, I was thrilled to realize that the scope of our historical American art collections was finally more comprehensive. Like many museums across the country, LACMA’s American art collection technically did not include works made by American Indians. Instead, it contained many works of art, especially from the nineteenth and early twentieth centuries, depicting American Indians generically and often stereotypically (with the important exception of our recently acquired portraits of Chippewa chief No-Tin).

The conventional notion was that American Indian art is not American art per se, the latter being traditionally understood as fine and decorative arts produced from the colonial era through the mid-twentieth century by formally trained, non-Native American artists. Recent exhibitions, such as The Modern West: American Landscapes, 1890–1915, and key museum installations at the Denver Art Museum, the Nelson-Atkins Museum of Art, and the Brooklyn Museum of Art, have tried to counter this convention to better present the two art histories—American Indian art and American art—as both independent and interdependent. And now, with the installation of Pueblo Pottery: 1800–1900, LACMA is able to do the same, if on a much more modest scale. 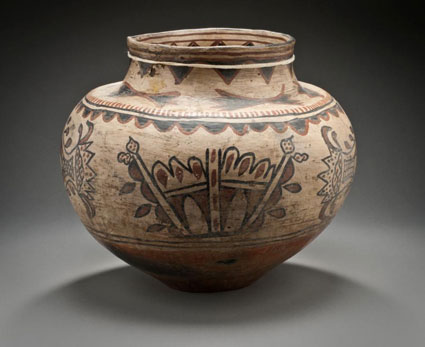 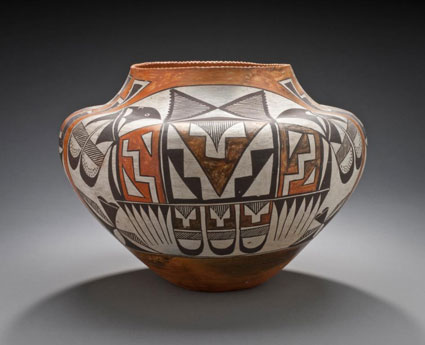 Ultimately, these ceramics will be installed permanently in the American art galleries and may help us continue to shape an American art collection that includes more images and objects of—and by—American Indians.

Can’t make it to the Bing Theater tonight for the conversation between LACMA Director Michael Govan and legendary director Martin Scorsese? Follow @LACMA on Twitter as we live tweet the event at 7:30 pm this evening. Govan and Scorsese will discuss the importance of film preservation and the key role that film should play in a museum or cultural institution.

Once again that rare bird has arrived—the work-free Monday. To celebrate Martin Luther King Day, LACMA is free all day. This is your last chance to see A Tale of Two Persian Carpets: The Ardabil and Coronation Carpets, which closes after today. And a couple of other shows—From the Spoon to the City and Heroes and Villains—are nearing the end of their runs as well, making today the day to come check them out before they’re gone forever. We’ve also got live music and dance performances in the afternoon, just for a little extra incentive.

Inside the Temple of the Mind

Last week I was out on the plaza here at the museum when I noticed a rickety old tin-roofed shack sitting on the plaza, just across from Pentimento, the museum restaurant. 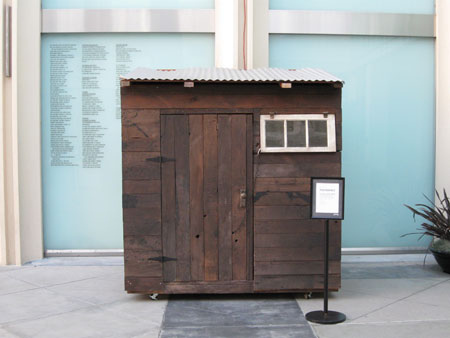 Knowing that we hadn’t lately commissioned a starchitect for a new project, I took a closer look. I couldn’t see very well inside, and the door seemed to be chained shut, but it sure sounded like someone was inside—a moaning sound reverberated from inside, looping over itself like a sonic snake eating its own tail.

Then I remembered: it was Thursday.

That meant Emily Lacy was here again, as she has been every Thursday through Sunday in December and January, doing her Temples of the Mind performance. This was the “Hermit’s Cabin” component she mentioned in the Q&A we did with her—apparently available for entry, though it didn’t seem so when I happened to be there.

The moaning cabin might have seemed a little odd to your average salad-eater at Pentimento, but I have to admit I pulled up a seat and simply sat outside the cabin for a few minutes, listening—and enjoying. (Of course, I’m a guy who was also mesmerized by the 88 Boadrum event we did a couple of years ago.) After a bit I got up and went into the Pavilion for Japanese Art, where Lacy is performing for five-hour stretches on the days she’s here.

Now here was the experience.

The Japanese Pavilion is set up in such a way that one follows a spiraling ramp from the ground floor up to the top, with small landings, or tokonomas, along the way. On each of these tokonomas was a pile of small practice amplifiers, effects pedals, and instruments. While I was there no one was actually playing any of the instruments, but the amplifiers were emanating a variety of sounds.

The first thing I picked out was that woman’s moaning—maybe Lacy was in that cabin wildin’ out, transmitting her looped and delayed voice into the pavilion, where it carried up from the ground floor to the ceiling, bouncing off the walls of Bruce Goff’s strange but wonderful building. Along with her ghostly voice, there in the pavilion I could also hear percussion and synthesized digital squiggles of sound. It was a much fuller, enveloping experience compared to loitering outside the Hermit’s Cabin.

I decided to walk the pavilion, from each little sound station to the next. Here is where the interaction of Emily Lacy’s performance with the architecture itself becomes apparent. As you walk from one tokonoma to the next, each of the different elements of sound dominate or recede in your ears. In one area the disparate sounds are cacophonous; in another, totally musical; still elsewhere it feels like more than music—it’s something more immersive than mere melody and rhythm. The way the sounds morphed depending on where I was—standing still, moving from a tokonoma to the perimeter ramp, moving from the ground floor to the very top—reminded me in some ways of a similar experience I had with LaMonte Young’s brilliant Dream House in New York, a minimalist work comprised of two gigantic speakers emanating long droning tones in an otherwise empty room swathed in pink light. As you move through that room, the frequencies of those tones start to run long or short in your ears—you in effect “conduct” the piece depending on how you move (or don’t move) through the room. Lacy’s piece wasn’t exactly the same—I felt more like I was “mixing” than “conducting”—but it was another great experience of sound and architecture coming together to make something altogether different.