In February I posted curator Bruce Robertson’s remarks about the painting Watson and the Shark, which hangs in the first gallery of our exhibition American Stories.

The exhibition includes another great painting (and a favorite of many visitors to LACMA, as it usually hangs in our American Art galleries), Cliff Dwellers, by George Bellows. It hangs towards the end of the exhibition, with other early twentieth century works. 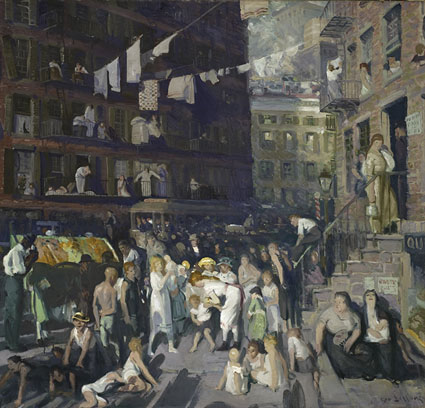 Recently, I asked a group of kids attending Art Camp at LACMA to tell us what they see in Cliff Dwellers. As is so often the case with kids, they descended on the painting with glee and open-minded curiosity about all the visual information contained therein.

The kids’ close visual attention and the ease with which they imagined themselves in the world depicted by Bellows is a model for how to read a picture. American Stories offers gallery after gallery of paintings that invite viewers to do what these kids did so well: to look closely and investigate a different time and place through the eyes of an artist.

This entry was posted on Friday, March 26th, 2010 at 6:00 am and is filed under Uncategorized. You can follow any responses to this entry through the RSS 2.0 feed. You can leave a response, or trackback from your own site.