This weekend was the museum’s 25th annual Collectors Committee event, in which a group of generous donors pool their resources to purchase works for LACMA’s collection. Curators from nearly every department present artworks they’d like to see added to the permanent collection, giving short presentations on the objects’ background and also temporarily installing the works in one of our galleries. After careful consideration, the Collectors Committee members—there were about 160 this year—come together for a gala dinner and vote on which artworks to acquire. The voting is over when the pool of funds is exhausted. (You may recall we made a few acquisitions thanks to the Collectors Committee last year as well.)

Saturday’s event raised a record $2,063,000, and we have consequently added six new works to our collection, ranging from a seventeenth-century Japanese screen to a nineteenth-century painting to a variety of masterful pieces of Tibetan furniture, as well as three works of contemporary art. Here’s a look at the night’s bounty. 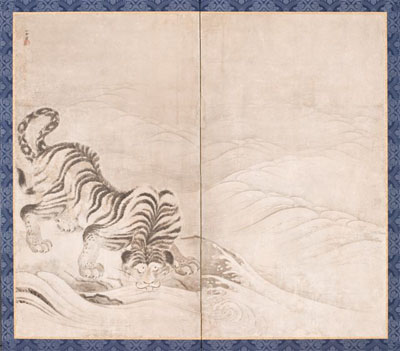 Kano Sansetsu, Tiger Drinking from a Raging River, c. 1640. This two-panel folding screen dates to Japan’s Kanei period (1624–1644). According to curator Robert T. Singer, Sansetsu is among the most original Japanese artists of the seventeenth century. Tiger Drinking from a Raging River is the first work by the artist to enter the collection of any museum outside of Japan. Over the weekend the screen was installed and is now on view in the Pavilion for Japanese Art. 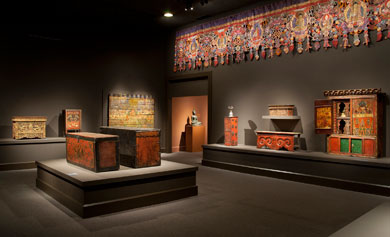 The Hayward Family Collection of Tibetan Furniture. The Hayward Collection contains 39 masterpieces of virtually every important type of Tibetan furniture, dating from the late 12th to 20th centuries. Tibetan furniture was typically made for Buddhist monasteries and households, and features vibrant colors and ornamentation. With this acquisition, LACMA’s collection of Tibetan and Nepalese art has been elevated to the most comprehensive public collection in the world. This collection is already on view in the exhibition In the Service of the Buddha: Tibetan Furniture from the Hayward Family Collection. 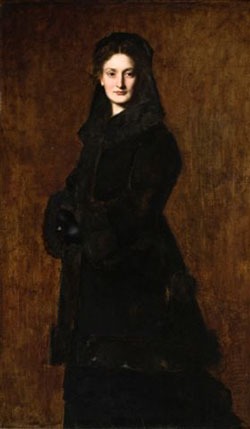 Jean-Jacques Henner, Portrait of Madame Paul Duchesne-Fournet, 1879. Though Henner is known for his nudes and landscapes, earlier in his career he was a sought-after painter of religious subjects and portraits. Curator J. Patrice Marandel writes of the piece, “Among the portrait painters of his generation, Henner developed a distinctive style. Less voluptuous than Carolus-Duran’s but more spirited than Leon Bonnat’s, Henner’s portraits were particularly appealing to a clientele eager to display in a dignified manner their newly acquired wealth and social rank.” Indeed, this portrait gained some renown at the time of its creation when Henner charged his subject, the wife of a prominent politician, 10,000 francs—an extravagant sum in its day.

John Baldessari, Portrait: Artist’s Identity Hidden with Various Hats, 1974. LACMA has a number of Baldessari works in its collection, with particularly important works from the 1960s (Wrong) and the 1980s (Heel), but Portrait is the first significant work of the artist’s from the 1970s to enter the collection. It will be featured in the upcoming retrospective John Baldessari: Pure Beauty, opening at LACMA in June. 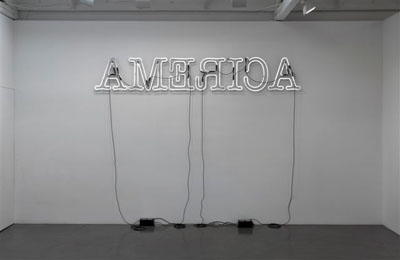 Glenn Ligon, Rügenfigur, 2009. Rügenfigur is part of a recent body of Ligon works entitled, collectively, America. Curator Franklin Sirmans notes that Ligon’s series was inspired by the paradoxical opening of Charles Dickens’ A Tale of Two Cities—”It was the best of times, it was the worst of times.” Sirmans writes, “At once, this expansive neon courier-font A-M-E-R-I-C-A in-verso conjures what Ligon describes as the ‘somewhat troubling’ moment in our country’s identity.” 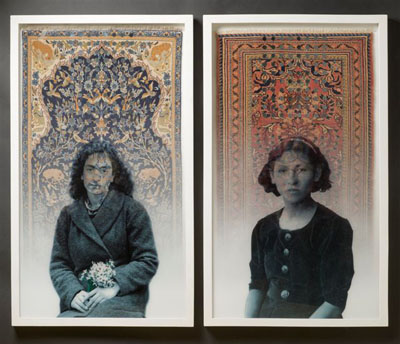 Samira Alikhanzadeh, Untitled, 2009. Iranian artist Alikhanzadeh’s work focuses on found images of women from the mid-1930s, a period when Reza Shah Pahlavi (r. 1921–41) led a reform movement to bring women and minorities in Iran into the mainstream, including the compulsory uncovering of women. This was the first generation of Iranian women who were free to appear uncovered in public and in photographs. As curator Linda Komaroff explains, Alikhanzadeh’s untitled work “includes small shards of mirror allowing the viewer (perhaps, ironically, an Iranian woman now decreed by law to wear hejab) to identify more closely with the nameless girls and women dressed in their once fashionable clothes.”

Look for future Unframed posts on some of these works; we’ll also let you know when any of these go on view.

This entry was posted on Monday, April 19th, 2010 at 6:00 am and is filed under Uncategorized. You can follow any responses to this entry through the RSS 2.0 feed. You can leave a response, or trackback from your own site.