One of the many pleasures of the current Baldessari retrospective Pure Beauty is looking at a whole gallery of his work from the 1970s, which exercised a measurable influence on a generation of younger artists. James Welling, Jack Goldstein, David Salle, Barbara Bloom, and Matt Mullican were among Baldessari’s first students at Cal Arts, where he started teaching in 1970. In our recent video interview, below, Baldessari recalled that he had been hired at Cal Arts as a painter. But in fact, he had just renounced painting and started making images with mass media images and print. He offered to teach a class called Post Studio Art instead.

Jim Welling enrolled in the class. In an interview, he recalled it thus:

John was very low key, very gentle. He would offer suggestions but didn’t say much.

I remember I made this work Hair on a field trip John took with the Post Studio class in 1973, six or eight of us. We went across the street from CalArts, at the time there was just a large open field there and we tramped around and made some work.

At that point I did not own a camera, so I borrowed one. I photographed people’s hair. It was a sort of conceptual joke—photographing people’s hair was the closest you could get to photographing their brain. One of the people in Hair is John Baldessari. 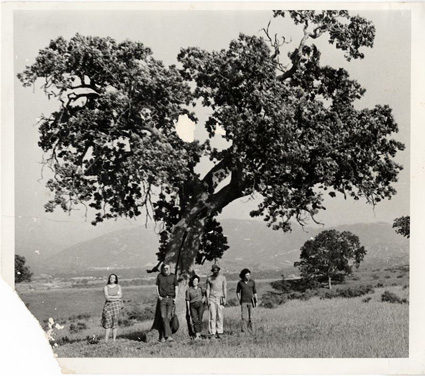 I remember that day John did a piece where he rolled a tire down a hill and documented it in a series of photographs.

John got all of our film and sent it to a lab and had prints made.

He traveled a lot and when he traveled, he would have substitutes come in—Michael Asher taught his class once for a couple of weeks. John would come back with a suitcase of catalogues and Matt Mullican and I would pour over these catalogues—mostly from shows in Europe that were hard to get and hard to see.

The 70s were a recession era. Around this time there was a common spirit. A lot of artists were really forced to go back to basics. There wasn’t really an art market. There were strong alternative spaces for art and music. Most of us came up through this system of alternative spaces, which was fantastic for young artists.

In the video clip below, Baldessari reflects on the class and the artists who were his students.

This entry was posted on Tuesday, July 6th, 2010 at 10:40 am and is filed under Uncategorized. You can follow any responses to this entry through the RSS 2.0 feed. You can leave a response, or trackback from your own site.