A Grand Tour of LACMA

For a wealthy English aristocrat in the eighteenth century, a “Grand Tour” of Europe was part of a complete education. Now on view in our newly installed European galleries, we have a Pompeo Batoni portrait of English traveler Sir Wyndham Knatchbull-Wyndham commemorating just such a trip.

Wyndham gestures to a landscape in the background that many grand tourists visited—the ruins of an ancient temple at Tivoli, near Rome. To his left, you can see a classical sculpture that he may have brought back from his travels.

The Grand Tour was a rite of passage, an opportunity to explore the roots of European culture, build language skills, and gain worldly experience. It might last months or years. Now that the new European galleries are open, it’s possible to take your own miniature Grand Tour through the museum and see works of art like those an eighteenth-century aristocrat might have traveled to see. 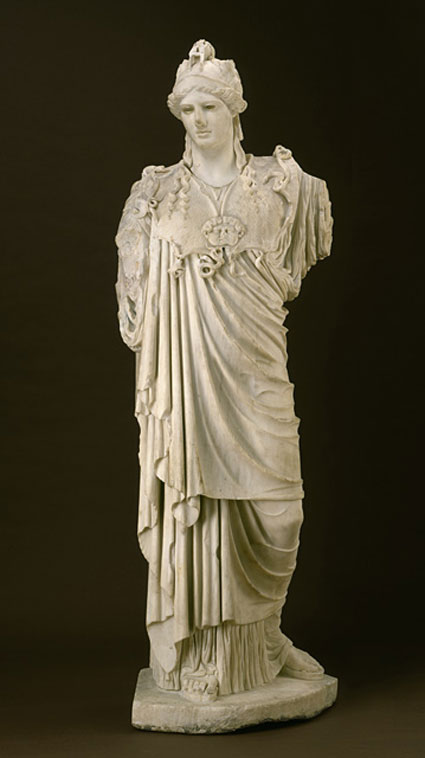 This is Athena, the goddess of wisdom—the Romans also called her Minerva. We know who she is because of her helmet, and because here she wears a shield decorated with a head of Medusa, often associated with Athena. Statues like this were very popular with Grand Tourists. This Athena was created in ancient Rome, based on an even older Greek model. So when Grand Tourists saw this Athena, they were experiencing the combined skill of ancient Greece and Rome. The statue was excavated outside Rome in 1797—when lots of Grand Tourists were visiting—and it was acquired by Englishman Sir Thomas Hope, who had just recently completed his own Grand Tour.

The Grand Tourist would also have visited Venice. The European galleries include an excellent scene of Venice, Piazza San Marco Looking South and West, by Canaletto. In essence, it is a large and very expensive postcard, a souvenir that would hang on the wall as proof that you had been there. So many tourists brought views of Venice back to England that the popularity of visiting that city actually increased!

Florence was part of a typical Grand Tour, and we have Antonio Montauti’s Triumph of Neptune and Europa from the early eighteenth century. This bronze relief sculpture depicts the ancient god Neptune along with Europa, daughter of a Phoenician king. Grand Tourists visited Florence to learn more about ancient myths and culture—which was, conveniently enough, being used as subject matter by many contemporary artists of the time. So the sights in Florence may have included works of art like this Montauti relief, though probably not this exact work, which was created for Pope Clement XII’s personal collection.

The Grand Tour eventually lost its cachet of exclusivity as the railroad and other transportation improvements made it much easier for middle-class people to travel throughout Europe. Today, you don’t even need to leave Los Angeles.

This entry was posted on Thursday, July 8th, 2010 at 6:00 am and is filed under Uncategorized. You can follow any responses to this entry through the RSS 2.0 feed. You can leave a response, or trackback from your own site.

One Response to A Grand Tour of LACMA