A phrase like “Manly Pursuits”—the title of our Thomas Eakins exhibition, which opened yesterday—requires a strong statement for an exhibition title wall. I knew I wanted to do a take on the banners seen in the background of Eakins’s boxing paintings, but the trick was how to get them up there.

There needed to be ropes. Wrestling, boxing, rowing, equestrian riding, and sailing—ropes are used in all of them. I dug around at hardware stores and scoured Marine supply websites looking for the perfect pulleys, fender hooks, and manila rope. 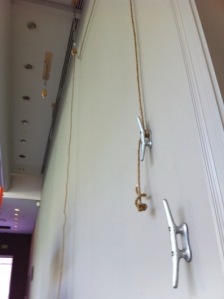 With a lot of help from our great Gallery Services staff and the good folks at Olson Visual, who produced the banners, we managed to create really cool exposed rigging that connotes the hardware of sailing, while recasting Eakins’s work in a slightly steampunk light. 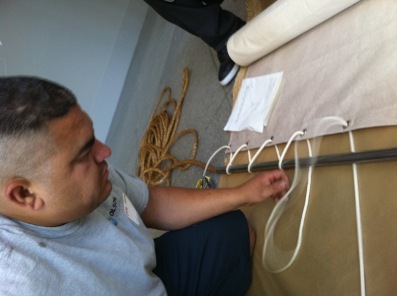 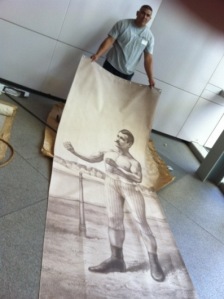 The man on the banners is John L. Sullivan, who was both the last of the bare-knuckle fighters and the first heavyweight gloved boxer. Sullivan was fighting at the same time Eakins was painting, and was one of the first American sports superstars. Eakins and Sullivan each symbolize two sides of the professional athlete. While Eakins seemed to paint the quiet quest for physical excellence, Sullivan was photographed for cigarette cards and made millions—a harbinger for the flashy, billion dollar industry professional sports has become in the last hundred years.

This entry was posted on Monday, July 26th, 2010 at 5:00 am and is filed under Uncategorized. You can follow any responses to this entry through the RSS 2.0 feed. You can leave a response, or trackback from your own site.