According to the US Department of Labor, it’s possible that Labor Day began with one Peter J. McGuire, leader of the Brotherhood of Carpenters, who advocated a day to honor workers “who from rude nature have delved and carved all the grandeur we behold.” The same might be said of artists. This Labor Day, you can visit LACMA for free and, while you’re here, see images of workers through the ages.

Winslow Homer’s Cotton Pickers (1876) depicts women working in a cotton field, silhouetted against the sky. He painted them at a tenuous moment in American history, as African Americans struggled to claim the right to control their own labor where slavery had recently flourished. Homer depicts the two women as monumental and majestic, the figure on the right looking into the distance with a resolute expression. It’s a powerful portrait of labor and determination. 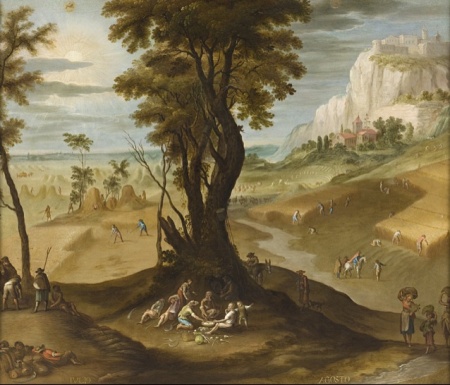 From the Spanish colonial period, we get The Twelve Months of the Year, hanging in our Latin American galleries. Painted in the latter half of the seventeenth century, the series depicts all sorts of seasonal work, and serves as a reminder that work was once tied more to the weather than to a job description. Each painting depicts two months, indicated in Spanish. The scene showing July and August shows farmers working in fields of golden wheat, surrounded by people lunching and kicking back on the grass. September/October,which hangs just next to it in the gallery, invites a post-Labor Day autumnal mood.

This Korean scholar, depicted in a nineteenth century scroll painting, suggests that thinking was working, long before we spoke of “knowledge workers”. You can’t fully appreciate the realism and detail of the portrait—the moles on his nose, the wrinkles of his forehead—without seeing it firsthand in the Korean art galleries. The portrait suggests not only the intense discipline required of a scholar-official, but also the rigorous working process of a professional artist who has mastered techniques characteristic of both Eastern and Western art, and who must have made numerous detailed studies before executing the final painting. (By the way, apparently the pink robe was typical of a high-ranking official, and would have been the type of casual outfit worn for studying at home.)

Is working out really working? If so, don’t miss the dual exhibitions Manly Pursuits: The Sporting Images of Thomas Eakins, side-by-side with Catherine Opie’s Figure and Landscape. Rowing, boxing, swimming, wrestling, sailing, hunting, and football-ing…there’s plenty here to wear you out, and much that serves as a metaphor for the trials of other kinds of work.

And if you want to see the fruits of LACMA’s current labors, peek into the Resnick Pavilion, which opens in just a few weeks. Curators, conservators, guards, electricians, and carpenters are all hard at work assembling upcoming exhibitions.

As you may know, we have been spending the last few months reinstalling our European collection on the third floor of the Ahmanson Building. Many of the galleries are already open, with a few more still to come. Last week designer Michael Storc snapped a couple pics of the installation continuing apace. We’ll let you know once the reinstallation is fully complete.

If you’ve read Barry Gifford’s novel Wild at Heart, or seen the film version directed by David Lynch, then you’ve met the characters Sailor Ripley and Lula Pace Fortune. Today, as part of our Cell Phone Stories project, Sailor and Lula visit LACMA. Gifford, who recently published Sailor and Lula: The Complete Novels, has set his characters loose here at the museum, where they’ve come upon Andy Warhol’s Black and White Disaster. Read the story here.

You can see Black and White Disaster if you come to the museum; it’s on view on the third floor of BCAM, along with a handful of other Warhols and works by Jeff Koons. Head up after you’ve taken in John Baldessari: Pure Beauty, which is nearing the end of its run.

If you’re an L.A. County resident, you can see the Baldessari show, the permanent collection, and all the other galleries for free after 5 pm tonight. While you’re here you can catch the Philippine-born vocalist Mon David performing for free as part of Jazz at LACMA. You can hear some samples of David’s music at his website.

This weekend we have two more free concerts in addition to tonight’s jazz: tomorrow, Oscar Hernandez and the LA/NY Connection will take the stage as part of our Latin Sounds series —ending next weekend!—and on Sunday pianist Maria Demina and violinist Mitchell Newman will perform works by Chopin and Respighi for the Sundays Live series.

Overheard at the Museum…

Lois Lane: Superman! You’ve arrived just in time!
Superman: Oh, hi Lois.
Lois Lane: The dastardly villains have made off that way, toward Fairfax!
Superman: Tuesdays are usually my day off…
Lois Lane: They’re getting away! Maybe you should fly, or use your super speed?
Superman: You be the reporter, I’ll be the superhero, okay?
Lois Lane: Or just run at a normal pace?
Superman:  Really kind of enjoying my walk right now, Lois. I’m actually here to see the Baldessari show.
Lois Lane: But the criminals!
Superman: You know, I only get so many days to myself, and Baldessari is closing in a few weeks. Today was really the day for me. I’ve got all this Justice League stuff happening in September…
Lois Lane: But, my purse! They stole my purse!
Superman: Maybe you could just call the cops? This is a long-overdue exhibition for an icon of conceptual art.
Lois Lane: Sometimes you can be so difficult!
Superman: I just want some “me” time.
Lois Lane: Whatever.

Did you miss Saturday’s Muse til Midnight? If so, you also missed mustaches. There lots of mustachioed gentlemen (and ladies!) roaming the event. Here were some of our favorites, courtesy photographer Jonathan Ikemura. 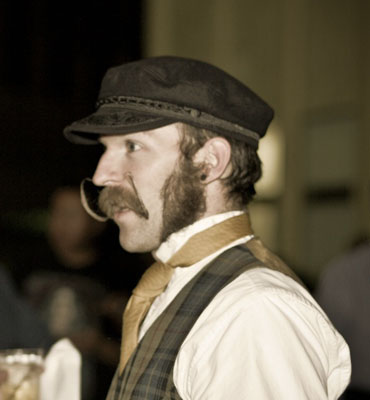 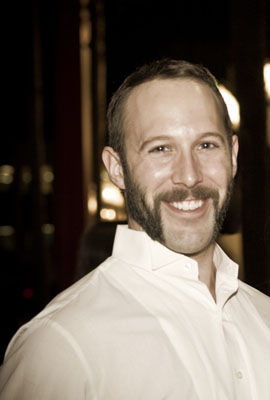