The Chapin Sisters Lend Their Harmonies to LACMA

Starting with the opening gala this Saturday, there are a lot of events and parties planned for the next week around the new Resnick Pavilion. I’m probably most excited for the Avant-Garde After Party,  also on Saturday. Tickets are still available—like the gala, it’s a fundraiser for the museum, though the ticket price is a little more earthbound for those who want to support the museum without breaking the bank.

So what makes this party the most exciting? For this young(ish) music nerd, it’s the performance from the Chapin Sisters.  There are certain songwriting ingredients I’m a sucker for, and lush harmonies are right at the top of that list. The Chapin Sisters have a great Laurel Canyon vibe about them, calling to mind the acts who populated that legendary locale in the late 60s and early 70s, blending folk, country, and rock.

You can sample some of the songs from the Chapin Sisters’ newest album, Two, at their website. I love the aching country ballad “Palm Tree” and sweet, bouncy “Left All Alone.” But my favorites are “Sweet Light” and “Digging a Hole.” I love them for their space—for how little actually happens in each song. “Sweet Light” is a capella for its first ninety seconds, the sisters’ voices wrapping around each other in gorgeous harmony. Then, at the midpoint, the voices go away and a lonely guitar converses with a vibraphone. It’s simple and gentle, loose and melancholy. “Digging a Hole” is also stripped down, letting the sisters’ voices carry the old-timey tune. Unlike the others, this song quietly builds itself up, layering drums, horns, flute, strings, and more harmonies as it progresses. Each addition is subtle; the song never feels busy, nor is it ever terribly loud. And yet, when the tambourine trots in at the end, the song’s climax feels larger than it actually is.

You’ll get your chance to hear these harmonies up close at Saturday’s After Party. For more info on the event, or for tickets, click here.  You can also learn more about LACMA Avant-Garde.

One day over the summer, André Leon Talley stopped by for a visit. He and Michael Govan visited the lab where curators and conservators were hard at work preparing Fashioning Fashion: European Dress in Detail, 1700-1915, which opens on October 2 in the new Lynda and Stewart Resnick Exhibition Pavilion. On the spot, Talley decided to shoot a selection of costumes beneath the Tony Smith sculpture in the Ahmanson Building for the September issue of Vogue. Editor Lisa Love soon arrived on the scene. Here’s what she had to say about the collection.

In spite of the many great after-hours events that LACMA has, my homebody tendencies usually get the better of me. But tomorrow night will be the exception when the Crenshaw High School Marching Band performs on campus.

Their connection to LACMA? The school has been the site of numerous visits by Catherine Opie—the results of which are on view in Catherine Opie: Figure and Landscape. (One work from this series I really love is the limited-edition print above.)

The event starts at 5 pm but I may very well stick around until well after 6:30 when Opie leads an informal walkthrough of her exhibition. Lounging on the couch will just have to wait.

Our Ingmar Bergman film series finishes up this weekend with a quartet of doozies: tonight, a double-feature of The Seventh Seal and The Silence. Tomorrow night, Bergman’s excellent Fanny and Alexander closes things out. Here are trailers for all three films, should you need the additional nudge to get out to the Bing and see these classics on the big screen.

Prior to Fanny Alexander we’re happy to screen the 2010 documentary …but Film is My Mistress,
directed by Stig Björkman and featuring interviews with Woody Allen, Bernardo Bertolucci, Lars van Trier, Martin Scorsese and others. Best of all, Björkman will be here in person. The documentary screens at 4 pm and is free—though tickets are required.

Concert-wise we’ve got two freebies for you. Tonight, the Bill Mintzer Canyon Cove Trio will perform for our weekly Jazz at LACMA series. Sunday night trio Latitude 41 will perform works by Schubert as part of the free Sundays Live series.

Also happening this Sunday, novelist Tom McCarthy, whose book C just made the long list for the Man Booker Prize, will read from his novel and will join author Chris Kraus in conversation in our Art Catalogues store, located in the Ahmanson Building. The event is free.

Of course, the more obvious reason for coming to a museum is to see the art. We’ve got plenty. Both Manly Pursuits: The Sporting Images of Thomas Eakins and Catherine Opie: Figure and Landscape are entering their final month on view. There’s also a new installation on view on the third floor of BCAM, Color & Form, featuring the work of Imi Knoebel, John McCracken, Christian Eckart, Gunther Forg, and Peter Halley. We’ll have more on the blog soon about this show.

Today, a few behind-the-scenes photos from the installation of Olmec: Colossal Masterworks of Ancient Mexico—one of the Resnick Pavilion’s inaugural exhibitions opening October 2. 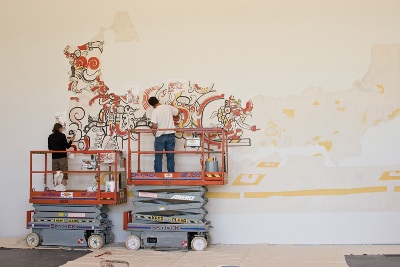 Hand painted onto the exhibition’s walls, this portion of a mural portrays a Maya dignitary carrying an Olmec-style baby, who represents the infant maize god. 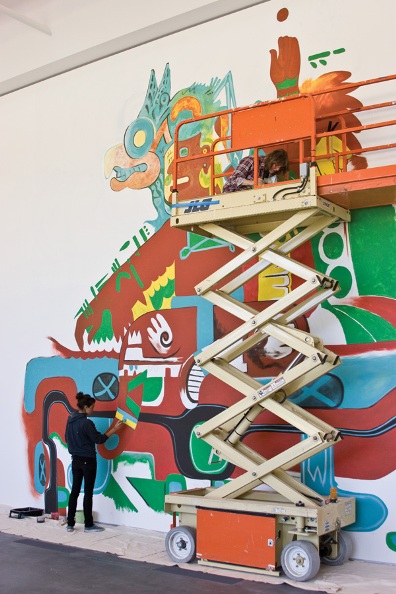 A royal figure dressed in an elaborate bird mask and ornaments form another mural. The zoomorphic throne may allude to ceremonies that occurred when the figure acceded to office.

Curator Virginia Fields examines a rare collection of objects that were recovered from a sacred site in the Olmec heartland. The greenstone axes, symbolizing ears of maize, were planted in formal arrangements at the site of a spring, signaling the importance of water to this agricultural society.

Another offering from the site—a life-size wooden bust, which survived because of the bog-like environment. 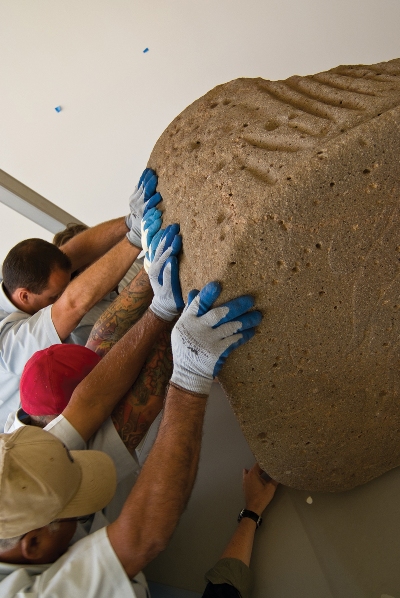 A crew installs a throne, which portrays an Olmec-style composite creature with both human and animal features.

Moving one of two large platforms, designed by artist Michael Heizer, into place, which will hold two colossal portrait heads.

Olmec monumental heads are individual portraits of some of Mexico’s earliest kings. Since the 1860s, seventeen colossal heads have been recovered. 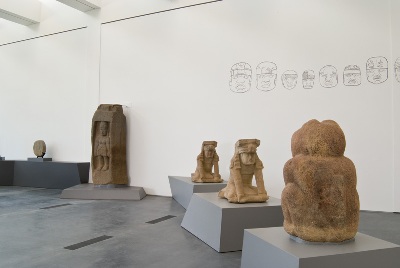 A chart in the gallery conveys the relative scale of the seventeen known heads, which range in weight from around seven to twenty tons. 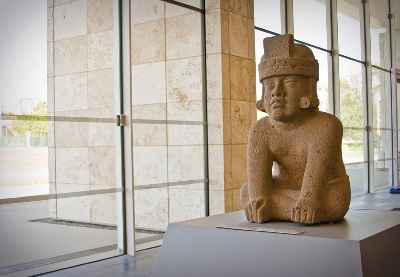 A cross-legged ruler from one of the towns under the hegemony of San Lorenzo.