Sneak Peek at our Plans for Tim Burton

Tim Burton opens at LACMA this spring; the exhibition explores the evolution of Burton’s creative genius through hundreds of drawings, paintings, photographs, moving images, storyboards, puppets, maquettes, and ephemera beginning with his days as a kid in Burbank.

Recently, our curator Britt Salvesen met with Burton and his team at LACMA and in Toronto, where the exhibition is on view. We talked with Britt about what it was like to meet Burton, and how the show will be installed at LACMA.

Will the show surprise people?

Most people have a really good sense of the Tim Burton style. But the show demonstrates how persistent that vision is and how evident it was from very early on, before he was even thinking about making full-scale feature films. You’ll find motifs of masking, creatures transforming from one thing into another, themes of childhood and adolescence. You also find this really unique mixture of horror and humor from the get-go. To see the ideas emerge in their pure form from his teenage days to the present is really striking! 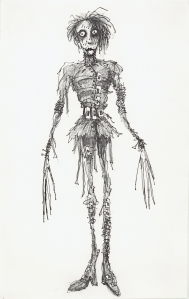 Tim Burton opened first at MoMA. Since then, it has traveled to the Australian Centre for the Moving Image and, now, at the TIFF Bell Lightbox in Toronto. How has the exhibition changed from venue to venue?

In the MoMA installation they constructed a very logical narrative starting with his early days in Burbank (the section is called “Surviving Burbank”), coming into his own as a creative thinker (“Beautifying Burbank”), and then they segue to his work in feature film in a third and final section (“Beyond Burbank”).

The next two venues for the show, in Australia and Toronto, are museums specializing in the moving image—film-based museums. So they changed the emphases and flow of the show. In Australia they used projected film clips which hadn’t been used in New York, and in Toronto they began with some of the early feature films rather than the student drawings. 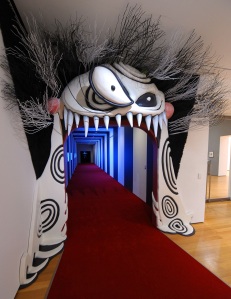 How do you foresee the installation at LACMA?

We are using the giant mouth as our entrance, but it won’t look exactly like it did at MoMA. You’ll enter through the giant mouth—you’ll be walking into it.

We have this incredible new exhibition space in the Resnick Pavilion. That’s really kind of a great playground for our thinking about the installation here. Tim and his assistants came to see the space where the Eye for the Sensual exhibition is currently on view. That installation is very spectacular, with its custom wall coverings and columns and the recreation of this elegant interior from another time. We discussed the possibility of retaining some aspects of that décor and transforming it into a Burtonesque version—adding a sense of dilapidation evoking the types of interiors he creates in his films.

We are thinking about how to create connections between different films and bodies of work with sight lines, maybe creating windows within the show where you can see from one section through to another.

We also will have access to the outside world through the windows on the north side of the building; we are hoping to install some pieces in the park, creating a relationship between the exhibition and the campus. The show includes a topiary sculpture of a deer that will be located outdoors. It’s a great photo op!

Sitting in a restaurant over dinner with Tim and his crew, I saw him drawing on napkins, one after another: pictures of things that were coming up in conversation, or things that had happened earlier that day, random things that crossed his mind. I could see that it’s really a way of thinking for him.

I got the impression that this venue means a lot to his team, because it’s their community. Over a lifetime in Tim’s case: his origins and his family and of course a lot of the talent he works with to this day are based here. I feel like it’s personally satisfying for him and his production crew.

Tim and his crew have been really open to museums process for developing and implementing a design. They have not swooped in to take it over as if it were a studio set. They have really been respectful of and helpful in recognizing the differences. It’s been a good collaboration.

Tickets for Tim Burton go on sale May 2. But if you join LACMA you’ll get two free tickets and will be able to make your reservations starting March 30. For the dedicated fan, a limited-edition museum membership is on sale now, including admission to the show.

This entry was posted on Monday, December 20th, 2010 at 11:35 am and is filed under Uncategorized. You can follow any responses to this entry through the RSS 2.0 feed. You can leave a response, or trackback from your own site.