Earlier this month I was in New York and had the chance to view the Met’s exhibition, Savage Beauty, on the late designer Alexander McQueen. I found myself incredibly moved—holding back tears, even—as I took in one extraordinary work after another. (I was glad to discover that I wasn’t the only one who had such an emotional response to the show). It was almost too overwhelming to enter so much of McQueen’s mind, and delve into his world, which seemingly has no boundaries in the expression of beauty. It didn’t surprise me then to come upon a piece in the show that was inspired by an equally imaginative artist, who happens to currently be on view at LACMA. In front of me was a black silk billowing ensemble from the collection that, in McQueen’s words, “was inspired by Tim Burton. It started off dark and then got more romantic as it went along.” 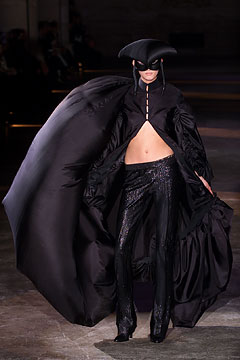 McQueen’s connection to Burton extends beyond this collection (aptly named Supercalifragilisticexpialidocious); Burton also created drawings for one of McQueen’s collections.  As I further considered both artists though, it wasn’t difficult to draw even more parallels between the two.

Both McQueen and Burton began creating works at an early age and attended schools to learn and train for their respective fields. Many are surprised to learn that Burton is a Burbank High School alumnus, and impressed to see the breadth of creativity during his youth. 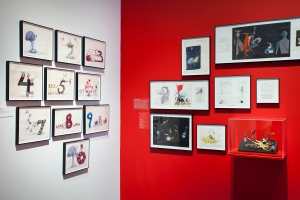 Both artists have achieved international acclaim for prolific careers established upon a recognizably unique form of expression—equally described as Gothic and romantic. They have each found inspiration in literary sources, including Edgar Allen Poe and the Brothers Grimm; McQueen stated that “life…is a bit of a Brothers Grimm fairy tale,” while Burton created a Japanese-themed twist on Grimm’s Hansel and Gretel for his first live-action production. Each possesses a singular vision and aesthetic, though both Burton and McQueen have embraced storytelling in their work with narratives that are often autobiographical and/or inspired by the world around them. 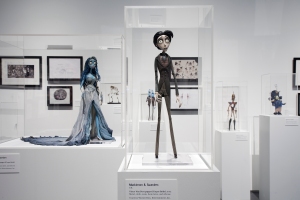 This entry was posted on Monday, July 25th, 2011 at 9:39 am and is filed under Uncategorized. You can follow any responses to this entry through the RSS 2.0 feed. You can leave a response, or trackback from your own site.