By popular demand, this program has been extended through February 16!

Two of the works presented at Stark Bar were created specifically for LACMA; three originated in other cities. Scott Draves’s Generation 244 genetic algorithms and Robert Seidel’s vellum have been presented as site-specific, multiple-screen installations in New York and Seoul. Baerbel Neubauer’s playful animated Water Ambiences, a new work created for the LACMA screens, explores water rhythms, one of the themes also seen in Christina McPhee’s new nine-screen Bird of Paradise. Maura McDonnell’s Silk Chroma was originally performed as a visual music installation in Dublin. Charles Dockum’s 1969 Mobilcolor Projector film, originally a 16mm film document of his color organ performance in three movements, was preserved by CVM, transferred to HD, and reformatted to three screens for this LACMA program. 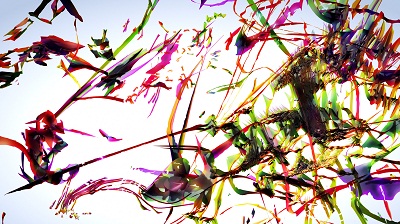 The artists here investigate silent lyrical abstract art, though many also work in the visual music tradition of establishing a strong interrelationship of image and sound. Charles Dockum’s Mobilcolor work, live performance of projected abstract colored lights, is part of the color organ history that includes Thomas Wilfred and is a pre-digital forerunner to today’s veejay culture and live cinema. Dockum worked in Altadena for decades and was supported by the Guggenheim Museum (then the Museum of Non-Objective Painting). 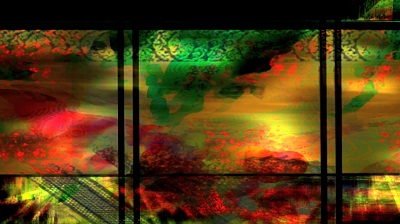 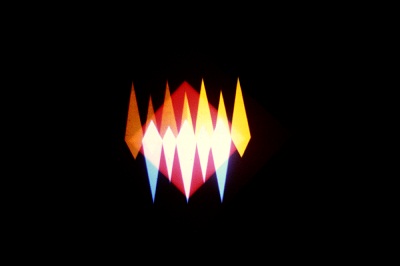 The Center for Visual Music is a non-profit archive dedicated to visual music, abstract cinema, and experimental animation. Its film and video programs can be seen in museums and cultural centers worldwide, and its archives house the world’s largest collection of visual music resources, including the films and papers of filmmaker-artist Oskar Fischinger. In 2011, CVM presented a Jordan Belson retrospective at LACMA, and in April it will present two special film programs in the Bing Theater in conjunction with the current exhibition California Design, 1930–1965: “Living in a Modern Way,” including a retrospective of films by Oskar Fischinger.

The videos can be seen at Stark Bar, located on the BP Grand Entrance, through January 31. You can catch them every morning (besides Wednesday) from 10:30 am to noon. In addition, the videos are also on view Monday, Thursday, Friday, and Saturday from 8 pm to 11 pm and Tuesday from 9:30 pm to 11 pm.

This entry was posted on Wednesday, January 25th, 2012 at 6:30 am and is filed under Uncategorized. You can follow any responses to this entry through the RSS 2.0 feed. You can leave a response, or trackback from your own site.

One Response to Expanded Abstraction: Animated Film and Digital Art on View at Stark Bar