Last year, LACMA began a partnership with the City of Los Angeles’s Department of Cultural Affairs to work toward the long-term preservation of Watts Towers. Lucas Casso, an intern with LACMA’s Department of Curatorial Planning has been conducting interviews with artists and others who have been involved in or influenced by the Towers.

On a recent Saturday afternoon, I traveled to Watts to interview assemblage artist Dominique Moody. Dominique is currently the R Cloud Artist in Residence and works on East 107th Street, only a stone’s throw from the Watts Towers. Moody’s work was recently featured in a yearlong solo exhibition at the Watts Towers Art Center and can be seen on her website.

Moody and I first walked around the property on which she lives and works, including the installation version of her NOMAD project, the final product of which will give her a traveling studio and living space. After seeing some of her works, we sat down to talk about the Watts Towers.

Lucas Casso:  From what I understand, you have moved around and lived many places in your life. When was your first encounter with the Watts Towers?

Dominique Moody: Back in the early 1980s or late 1970s, I moved to California with a few members of my family from the East Coast. We took the train down to L.A. and the two things we wanted to see were the Towers and Olvera Street. The Towers—because I come from a creative family—were this wonderful, unusual environment. At the time there were no fences around it and you could literally just walk into them. It was this very magical place. It was so different too because it was sitting smack in the middle of a neighborhood. As a creative person, I felt in awe of the idea that it was not just public art that was commissioned and created and sanctioned, but it was a work that came out of being in a place—not only by a single person but then also with the response of the community.

That really touched me, and I didn’t really understand it in terms of putting it into words at the time, but it really tapped into me artistically as something I had not found as an experience through my arts education. We didn’t go into exploring that kind of art, but I had experienced it going through places like the South, where you would see things that people expressed. It wasn’t even often called “art” or the individuals called “artists,” but they just did it because they needed to do it.

LC: What do you think is the role of the Towers in the arts community?

I marveled at Rodia’s tenacity. His focus to keep up on a piece of work like that for so long . . . Today, for most artists, if you haven’t done your thing in two or three years you’re almost washed up!  The raw essence of the Towers is that they were created by a man out of his creative genius. And he gave it to a community, so the community then ends up playing a role that is unusual in art. Even though it was created by an individual, the community had this relationship with him in order for it to happen—they could have chased him out.

One of the reasons I came here is that if you take an unusual idea and you try to create that idea in an environment that is not accepting, it’s not going to happen. You are constantly going to butt up against people who won’t tolerate it. And I wanted to be in a neighborhood that would be excited and tolerate my creative passion. And I couldn’t have chosen a better place. 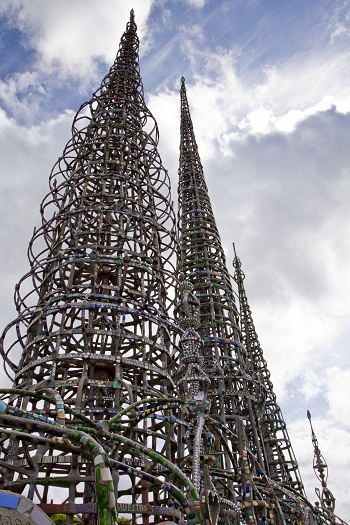 LC: You work—almost literally—in the shadows of Watts Towers. Has your perspective on them changed, being so close day after day?

DM: My perspective has actually grown, especially being this close. If you come by and you’re just visiting for one day and you’re seeing it in that one moment, it could be incredibly memorable, just that singular moment. But when you’re here in the early morning, at night, in the rain, you’re here during events and tours, you’re here when there are problems, it becomes a living thing. It becomes much more alive to you. I have grown to appreciate being able to see it in all of those forms. It gives it so much more depth.

Seeing that genius and living so close to it, I almost feel that there is an energy that gets pulled to this area because of it. And that energy sometimes has been both very productive and sometimes has kind of been an energy that’s not controllable. So living here, I sense it even more so. And it has felt like a real privilege to live in the neighborhood, with the neighbors and the history, with that kind of genius.

LC: As an assemblage artist, do you draw inspiration from the Towers, or have they shaped your work in any way?

DM: Yes, and even in the very beginning, in the 1980s, I had always been intrigued by certain types of mediums. Mosaic was one of them. But because of the fact that it can be so heavy, I moved around too much to initially think that I could do mosaic. But then seeing Simon Rodia use this stuff he found along the railroad track and had dug up in the yard and hauled home from his work, I realized there is a whole world of materials that are literally just littered everywhere that could be tremendous resources for me. I learned things in terms of the aesthetics of how these strange, unrelated materials could be so beautiful together. It still informs my work even when I’m not working in mosaic—his way of taking the color and the shape of the material that articulate where it’s going to go next. 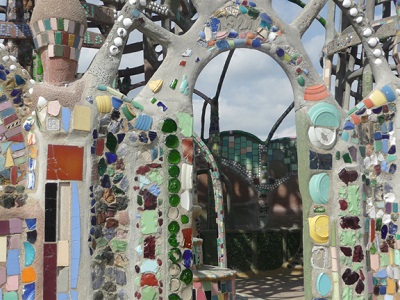 LC: How do you think Rodia felt when he left the Towers? What do you think the process was in leaving it and in deciding that it was finished?

DM: It would be an interesting time just to have been there—not necessarily to have asked him a question, but to have been there to watch him in the process of letting it go. For me it has never been hard to let the pieces go because the work has been so personally narrative that I have lived those experiences. So when it’s time for the pieces to go, I don’t feel disconnected to the experience.

He’s an interesting person because I think his answer would not have been formalized. I feel that even if he only said a couple words that the authenticity of those words would have been phenomenal. I think the bottom line is: You’re ready, it’s ready, and that’s it. Then you’re done.

This entry was posted on Monday, March 12th, 2012 at 10:49 am and is filed under Uncategorized. You can follow any responses to this entry through the RSS 2.0 feed. You can leave a response, or trackback from your own site.