Q&A with Victoria Lyall, Co-Curator, Children of the Plumed Serpent

Children of the Plumed Serpent: The Legacy of Quetzalcoatl in Ancient Mexico is the first major survey of art made by an alliance of ancient kingdoms in southern Mexico during the Postclassic and early colonial periods, on view at LACMA through July 1. These kingdoms resisted subjugation by both Spanish colonizing forces and the Aztec Empire, in part by establishing a vast network of trade through the development of a sophisticated pictorial language. Unframed‘s Jenny Miyasaki spoke with Victoria Lyall, co-curator of the exhibition, about these little-known cultures referred to as the Children of the Plumed Serpent.

Jenny Miyasaki: First things first: Who are the Children of the Plumed Serpent?

Victoria Lyall: They were a confederacy of independent kingdoms in southern Mexico in what are known today as the states of Oaxaca, Puebla, and Tlaxcala. The Plumed Serpent is the animal incarnation of the deity Quetzalcoatl, who figures very prominently in the Postclassic period, the period that the exhibition covers, roughly AD 900 to 1521. Quetzal [translates to] “feathers” and coatl is “serpent.” You can imagine this mythological serpent covered in gleaming green plumes. Legend says that Quetzalcoatl ruled as king over the city of Tula, which is eighty kilometers northwest of Mexico City and an important city of the early period, AD 900 to 1200. However, due to trickery by his rival, he is banished and embarks on a journey throughout these independent kingdoms—where he is embraced as their founder and patron deity. And they begin to call themselves the Children of the Plumed Serpent. 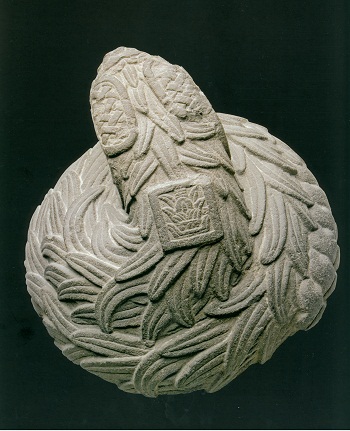 JM: Most people are familiar with the Maya and Aztec cultures—why an exhibition devoted to the Children of the Plumed Serpent?

VL: We felt that this unique confederacy of kingdoms hasn’t received the recognition it deserves. This time period overlaps a little bit with the one that we just looked at in Contested Visions in the Spanish Colonial World, which covered the apogee and eventual demise of the Aztec Empire in favor of the Spanish Conquest. The Children of the Plumed Serpent are flourishing at the same time as the Aztecs, actively controlling the trading corridors that go from the southwestern United States all the way down to Central America—but completely outside the borders of the Aztecs. What’s really interesting is that these communities become very well known for both their metal working and intricate turquoise mosaics. These works have always been categorized as Aztec, but they’re not. One of the catalysts for organizing this exhibition was to correct this misperception. Another reason is that the descendants of the Children of the Plumed Serpent continue to inhabit that region, and here in Los Angeles we have one of the largest populations of Oaxacans outside of Oaxaca.

JM: So that’s a particularly special connection between Los Angeles and this exhibition.

VL: It is. With all of our shows we reach out into the Los Angeles community, but I think more so than any other exhibition that we’ve organized in recent years, this one really resonates with our city because of the large Mexican diaspora—from Oaxaca and Puebla specifically. A lot of Oaxacans have been here since the 1950s, originally on the Westside, then eventually traveling to Pico-Union. We have been in contact with various urban centers [about the exhibition], and we’ve gone to churches and community centers to do presentations.

JM: How did the exhibition come about?

VL: This show really grew out of the scholarship of our co-curator John Pohl. He has been working in southern Mexico for the last thirty years. He and Virginia Fields [former senior curator and co-department head of Latin American art at LACMA] worked together to develop this exhibition at the end of 2006 and 2007. It really went into high gear in 2008, 2009. I came on board in 2008. This final exhibition really is the result of our fruitful collaboration. Sadly, Virginia passed away last year. 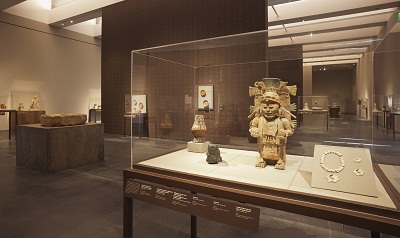 JM: How have you organized thirty years of scholarship and more than two hundred objects for this exhibition?

VL: We’ve organized it chronologically, divided into five galleries and five themes: Tula and Chichen, the two cities that emerge in the tenth century as pilgrimage points for Quetzalcoatl; the ascendance of Cholula as the new pilgrimage point, and artist mecca that developed both a unique “International Style” of art, and a pictorial language based on icons or symbols; the importance of storytelling, feasting, and ancestral divination in the Nahua, Zapotec, and Mixtec kingdoms; the materials that crossed great distances, such as gold, turquoise, jade, and textiles, as well as the manifestations of both this pictorial language and the International Style in the far corners of Mesoamerica; and, finally, an examination of the similarities in the way these communities dealt with the incursions of first the Aztecs and later the Spanish—emphasizing continuity rather than disruption.

JM: How did these communities manage to resist the incursion of both the Aztec Empire and the Spanish?

VL: All of these independent community kingdoms related to each other through marriage. That’s how you broker alliances—how you gain more power and access to luxury goods, land, and crops. While most of this region was conquered by the Aztecs in the late fifteenth century, the Zapotecs are able to maintain control of cacao production—an important ingredient in chocolate, the drink of the nobility—through a negotiated marriage between a Zapotec prince and an Aztec princess. Similarly, when the Spaniards arrive, these indigenous nobles make alliances and become an integral part of the new world economy—emerging in a new role of caciques, who functioned as intermediaries among the Spanish clergy, the Spanish officials, and the indigenous communities.

JM: What are some objects in this exhibition that you are particularly excited about?

VL: We’ve included a number of works from our permanent collection, as well as some really notable recent acquisitions. I am also very proud to have been able to get some extraordinary loans for this show, including the Codex Nuttall from the British Museum and the Codex Selden from the Bodleian Library at Oxford University. The Codex Nuttall tells the story of a culture hero of the Mixtecs known as Lord Eight Deer. The story of his rival is told in the other codex, and, interestingly, that protagonist is a female named Lady Six Monkey. The Codex Nuttall is probably one of the first manuscripts to travel to Europe after the arrival of the Spanish, and it hasn’t crossed the Atlantic since—until now. This is the first time it will appear on U.S. soil.

JM: Is there any lasting aesthetic influence of the Children of the Plumed Serpent?

JM: Definitely. One thing we wanted to communicate in this exhibition is that many of the things we showcase, such as the aesthetic sophistication that characterizes the Postclassic art style, remain in the region today. We have a couple of examples of contemporary works in the show, including one extraordinary textile from Oaxaca that was produced in 2010 by a woman named Zenaida Pérez Mendoza on the same kind of loom that has always been used in Mesoamerica. She calls it a wedding or burial mantle because you only wear your finest when you get married or when you get buried. The incredible aesthetic achievements of the Children of the Plumed Serpent—as well as the traditions that surround them—have made a lasting impact on the people and culture in both southern Mexico as well as those of Oaxacan descent here in America.

Children of the Plumed Serpent is on view now in the Resnick Pavilion until July 1. Previously on Unframed, we posted a series of photos documenting the installation of the exhibition.

This entry was posted on Monday, April 9th, 2012 at 10:06 am and is filed under Uncategorized. You can follow any responses to this entry through the RSS 2.0 feed. You can leave a response, or trackback from your own site.

One Response to Q&A with Victoria Lyall, Co-Curator, Children of the Plumed Serpent