Once upon a time, California was home to groundbreaking work in abstract, avant-garde animation. One of the most influential abstract animators was Oskar Fischinger (1900–1967), brought to Hollywood by Paramount from Berlin in 1936, thus becoming the direct link from the European avant-garde film movement to West Coast experimental filmmaking.  Fischinger’s animated films were quite successful in Europe in the 1930s, screening in first-run theatres worldwide. This Friday we explore this rich, pre-digital history of abstract animation and “visual music,” when Center for Visual Music (CVM) and LACMA present “Design in Motion: Oskar Fischinger and Abstract Animation,” a two-part series highlighting California abstraction on film.

The first program, “Optical Poetry: An Oskar Fischinger Retrospective,” includes his famous European work and films made in Hollywood. His films influenced generations of filmmakers, animators, and artists and we’ll see some of their work in the second program.

Fischinger produced more than fifty short films and eight hundred paintings and is recognized as the father of visual music and the grandfather of music videos. Today his films screen worldwide, his paintings are in major museums, and an HD installation by CVM re-creating his early expanded cinema performances, Raumlichtkunst, opens at the Whitney Museum and Tate Modern this June.

Fischinger lived and worked in Los Angeles from 1936 until his death in 1967, though his independent artistic vision didn’t mesh well with studio expectations. He resigned from Paramount over creative differences and had difficulty at Disney (where his Fantasia designs were deemed too abstract). He worked briefly for MGM and Orson Welles. With support from the Museum of Non-Objective Painting in New York (which became the Solomon R. Guggenheim Museum), he bought back his unfinished film from Paramount and completed it in 1943.  The resulting film, Allegretto (screening Friday), is one of the most popular abstract animated films of all time. 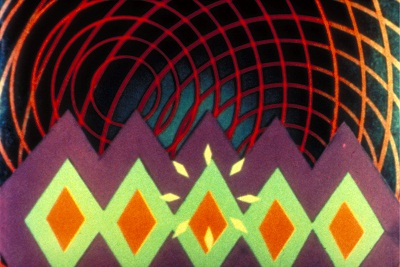 In California, Fischinger began painting, and his ties to LACMA go back as far as 1949, when Fischinger’s artwork was included in the California Centennial Exhibition and the 1952 show Artists of Los Angeles and Vicinity. 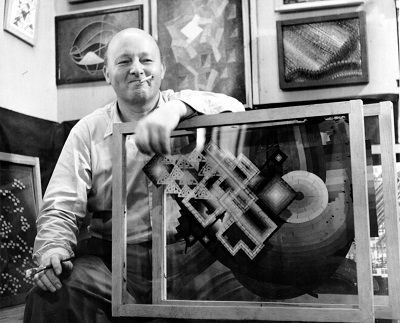 Oskar Fischinger in his Hollywood Studio with painted panels from his film Motion Painting no. 1 (1947), © Fischinger Trust, courtesy Center for Visual Music

In the 1940s and 1950s, Fischinger’s studio in his West Hollywood home became a mecca for experimental filmmakers who came to see his films and to show him their own: Jordan Belson, Harry Smith, Maya Deren, the Whitney Brothers, and others. Orson Welles, Paul Hindemith, and many European émigrés visited, as well as Fischinger’s close friends Jules Engel, Galka Scheyer, and Harry Bertoia. 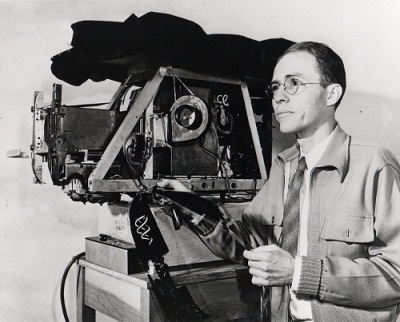 It’s a rare opportunity these days to see so many films in restored 35mm and 16mm original formats. All prints are from the collection of Center for Visual Music; the Fischinger films were restored by CVM, the Academy Film Archive, EYE Film Institute (Amsterdam), and the Fischinger Archive. The films will be screened in the Bing Theater. LACMA members and Film Club members receive discounts on tickets.

The Center for Visual Music is a non-profit archive dedicated to visual music, abstract cinema, and experimental animation.

This entry was posted on Thursday, April 26th, 2012 at 6:37 am and is filed under Uncategorized. You can follow any responses to this entry through the RSS 2.0 feed. You can leave a response, or trackback from your own site.

One Response to Oskar Fischinger and California Abstract Animation