LACMA CEO and Wallis Annenberg Director Michael Govan was among the speakers at Sunday’s dedication ceremony for Michael Heizer’s Levitated Mass. Exclusively on Unframed, we offer a transcript of his remarks from the historic event:

I and many others have compared this sculpture to the megaliths of the earliest Neolithic peoples, to the granite monuments of Ancient Egypt, or even the colossal stone portrait heads of the oldest cultures of the Americas that we exhibited when we opened the Resnick Exhibition Pavilion that stands behind me. Those great objects recall the beginnings of art and human civilization.

It became a matter of pride, first for the ancient Romans, and then in the nineteenth century for Paris and London, to take Egyptian stone obelisks to mark their cities as great powers. Indeed, in the 1880s, envious of those European cities, New York procured at great expense and, as always when big stones are moved, thousands marveling at its transport by sea and then through city streets to its current home in Central Park next to what was then the new site of the fledgling Metropolitan Museum of Art. 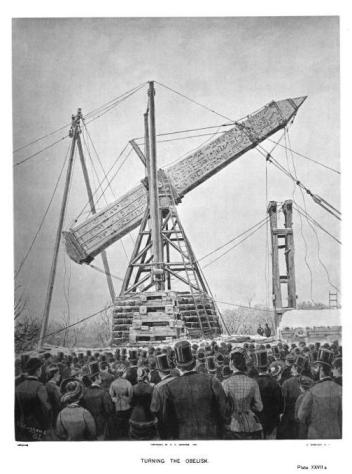 Well, I am happy to say that in twenty-first century Los Angeles we need not envy European or other cities. We live in the most creative city on the planet, with more artists living here now than any city in human history. Out metropolis is distinguished certainly by the automobile, but also by perhaps the greatest diversity of cultures to ever gather in one place.

And we have the confidence to work with a California-born artist, Michael Heizer, to create a landmark for our own time and place—made from a California rock, and with the collaboration of contemporary skilled engineers and builders.

The artist here has created a thoroughly modern artwork, abstract, and challenging the traditional notions of sculpture. I can read it as a series of visual and visceral oppositions: weight and lightness, mass and emptiness, up and down, solid and line, organic and human-made, nature and culture. You will read it your own way. It makes the impossible possible. As the artist said to me: “When do you ever get to see the bottom of sculpture?” For me, it’s better than those ancient monuments because it is not an expression of the power of gods and kings, but rather of people—of the museum visitor that descends into an empty abstract space defined by linear concrete walls to see the monolith from below, virtually levitating in our beautiful California sky.

It is a monument to our own time and place, and our own aspirations as people. And, being made of stone, concrete, and steel, and engineered to withstand time, perhaps it will be here millennia forward to communicate those feeling to future civilizations.

I would like to thank most especially, the artist, Michael Heizer, for his inspiration, and this artwork he has given us.

This entry was posted on Tuesday, June 26th, 2012 at 9:43 am and is filed under Uncategorized. You can follow any responses to this entry through the RSS 2.0 feed. You can leave a response, or trackback from your own site.