If the plan was to be in England between the queen’s sixtieth and the Olympic Games, which worked out in my favor, there certainly would be no avoiding the rainiest summer and, particularly, the close encounter, be it over ground or underground. Of course a little time and some exhilarating English art and it was home—be it an old home—at last.

As a young man, I arrived in England at the height of English sculpture in the late 1950s and early 1960s and was quite taken aback by the sheer variety and power of their extraordinary vitality in reimagining or referencing the tenets of the three dimensional form. Henry Moore in particular was a giant and that is not to suggest that one did not see these budding possibilities in say French art. 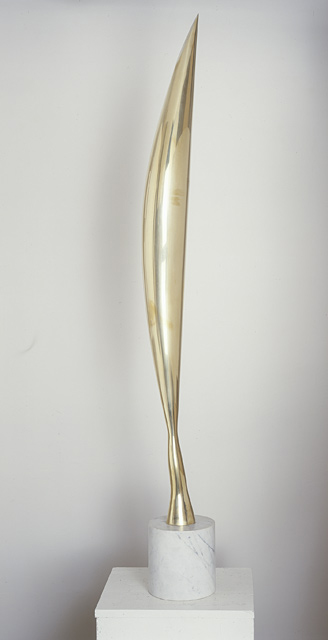 There was Constantin Brancusi, who was born in Romania but began his career in France, with his deeply influential Bird in Space and Raymond Duchamp-Villon’s cubist dynamic The Largest Horse, which are in LACMA’s collection; Bird in Space is on view now in the Ahmanson Building. Moore had met both artists in Paris in the 1930s. In fact, Henry Moore met and knew many of the important twentieth-century artists. But the English, as a whole, seemed to embrace this three dimensional universe at that time with an unerring depth and passion that were second to none. And of course it was not just sculpture but painting and collage, which would foster a cool mood of restrained grandeur that would lead me to a master with a single voice. And yet, I had never seen his work, collectively, so imposingly grand. 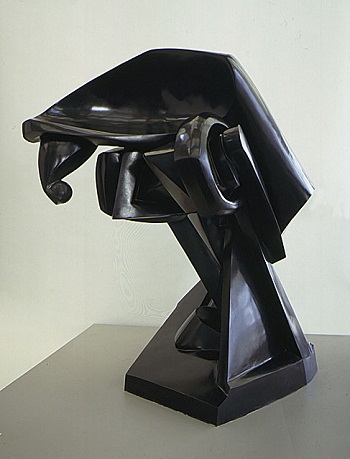 Henry Moore’s Late Large Forms on view now at the Gagosian was simply a revelation! Of course, one had been schooled in a million different ways of Moore’s work with some quite large pieces but the environment may have been the deceptive ingredient all along. Having seen the art inhabit the grandeur of nature, we may have accepted it happily as a part of man’s contribution to nature. But brought indoors, tamed as it were, it is no longer pitted against the giant oaks of Perry Green (home of The Henry Moore Foundation) and that Constable blue sky and dotting yards of generous green grass like my grandsons’ cricket pitch, which stretches to another green-band horizon.

However, in their white, cavernous, and limited box galleries where their forms have no competition, only each other, Henry Moore can instill and inspire wonder and grace, as though one is seeing them for the first time. In their fitful stillness, these vast castings are driven to posture humanity, to seal the family—the coupling in the impenetrable permanence of metal where he could make his art glow as a jewel or seem as stone or hewed in raw hacking strokes—a modernism strolling through sculptural history, unassailably marking points in time. The eye is made to choreograph in the mass, to flow, undulate, and jag upward, rounding off and gracefully looping back with curvaceous ease as the woman’s form sensuously appears and disappears, a journey but never quite coming to rest. In their scale, they displace time, and with their form and its origins, modernism, they are eerily elsewhere. There was something ancient, primordial, for Moore had perfected nature’s geological, haphazard, arbitrary wasting away to give us not only images of ourselves but our abstract dream inventions. 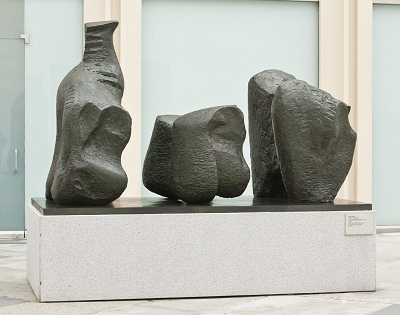 There was no other sculptor whose presence and images mark the time and modernism with such distinction and such a powerful aesthetic resolution and, thankfully without irony, just an intrinsic trust. At times, he is romantically sentimental sculpting in almost every known material with endless moments of embrace and reclining and at others he is brutally abstract.  His powerful iconic imagery, both three-dimensional and two, an art renowned throughout the Western world would serve as humanitarian beacons in the postwar years, healing the dreadful wounds while symbolically binding us to a common humanity.

Impressive as these works were, you get the feeling that scale was not a central theme of his art, for one need but look at the hand-size marquettes in which little is lost. So, reunited with LACMA’s perfectly proportioned pieces in its collection—two marvelous large reclining sculptures from the middle period lodged in the Director’s Roundtable Garden, a beautiful carved marble figure piece from his early period, and a defining abstract bronze from the late period, I concluded that Moore could be any size and the essential impact would remain.

This entry was posted on Tuesday, August 7th, 2012 at 7:00 am and is filed under Uncategorized. You can follow any responses to this entry through the RSS 2.0 feed. You can leave a response, or trackback from your own site.