The latest in our Artists Respond series is by Antonio Mendoza and a French artist known as Jimpunk. Inspired by Drawing Surrealism, the two artists are collaborating from afar, creating a video mashup that transforms found material into a dynamic ongoing collage that changes daily. The project is called Dysleksic. (Note: depending on your internet connection and various other factors, and in keeping with the nature of the artists’ work, the project may not play perfectly in all browsers or for all users.) 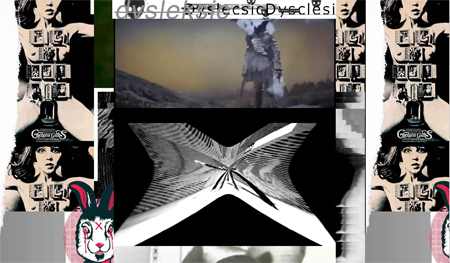 Here’s what Antonio had to say about the project:

I’ve always loved surrealism. I’ve been working with collage – video or physical – for twenty years. I’ve been collaborating with Jimpunk, who is based in Paris, for awhile and decided to go back to the surrealist roots in Paris and do a project with him.

We take these found videos and pile them on top of each other. It’s kind of like an exquisite corpse. We’re trying to use random material, creating a clashing of signs and a never-ending collage that has a lot of sound. Our goal is to keep this process going for awhile, loading new videos. It’s interesting to see how our respective contributions load and how they affect each other. It pushes the limits of the browser, but doesn’t quite crash. I think the surrealists would do something like that.

I don’t see what Jimpunk is doing, and he doesn’t see what I’m doing. We just started piling it on top of each other. Now we’re blending it – I’ll take stuff he uses and remix it and he’s been doing the same. At the end of the day it’s not clear who did what. Sometimes when I watch the videos I’m not even clear what part I did and what part he did. I’ll take something he did and alter it, he’ll take something I did and alter it.

The piece is chronological, in that whatever new material we add appears at the top. It’s set to play six videos at a time, and then when you scroll things will be static for a moment and then it starts playing again. It loads, then it will pause. We both like the jerkiness of the whole process, of stressing the system so that it’s working hard to play. It’s related to the surrealist ideal of going for the unexpected, the accidental.

I’ve removed three videos that weren’t playing the way I was hoping they’d play, but mostly I like the way it plays. Sometimes I don’t and I wish it would play a little bit differently, but that’s part of the process. Some of the artifacts from the compression become part of the piece. I’ve worked on other pieces that use that kind of datamoshing, an elaborate process where you take out the key frames from the videos, and then there are these strange artifacts that are fascinating. I’m sure we’ll introduce some of that;  once you run out of ideas you just datamosh it and it’s cool again!

Net art happened in the mid-1990s to about 2005. There were a lot of people exploring how to make something look interesting out of web pages. Messing up the code. Trying to hack the web browser to do things that it wasn’t meant to do.  The godfather and godmother of net art were a couple, a collective, called Jodi. Once everyone saw jodi.org, they wanted to do something like that.  Overall, I feel like everything that could be done with code and a browser has been done. I might be wrong. Mobile is maybe the new thing. Until I get a better phone I’m not going to be able to do anything with mobile!

We met five or six years ago because we do the same type of work. We talk by email a lot. I understand 50% of what he tells me and he understands 50% of what I tell him. I don’t know exactly what he’s thinking right now! Jimpunk is great in that you say let’s do this, and he’s like a machine. He just starts doing it.

In response to Dysleksic, Drawing Surrealism curator Leslie Jones said, “It gives new meaning to André Breton’s words “Beauty will be convulsive or it will not be at all.”

This entry was posted on Tuesday, November 13th, 2012 at 9:05 am and is filed under Uncategorized. You can follow any responses to this entry through the RSS 2.0 feed. You can leave a response, or trackback from your own site.