Rarely does an artwork get to be in two places at once, but it happened recently to a new favorite of mine that’s about to enter LACMA’s collection, a work by Amalia Pica entitled Sorry for the Metaphor #2 (2010).

Sorry for the Metaphor is by an artist interested in forms of communication (or lack of), who uses a variety of media (photography, sound, flags, sculpture, video) to comment on our many subtle and culturally differing levels of  interaction with each other, the landscape, and the monumental. As you might guess from the title, she also employs a bit of wit, and as you’ll see in my description of the involved installation, even more a bit of play.

The work originates as a photographic image that the artist blows up, purposely distorting it (playing with perception, memory, context), and then reproduces it  entirely as individual photocopied “tiles”—your basic mass-produced, DIY, and not-very-controlled Xerox copies. These, in turn, are wallpapered onto the wall and refitted as parts of a puzzle that is the original picture. Well, the original picture gone a bit wonky, as the copying stage is where the work (the message) is truly out of the artist’s hands. The final image shows Pica with her back to us, on a soapbox or pedestal, megaphone at rest in her hand, as she “speaks” to the vista–a meadow, forest, and sky before her–not us. 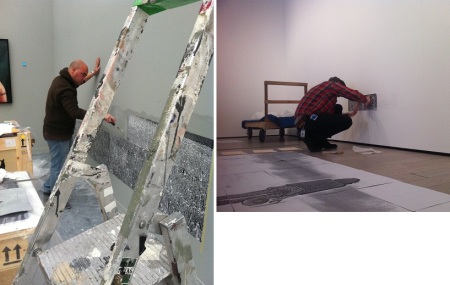 Disconnected from the functionality of the gesture depicted, she carries a message that is but a promise, and its unfinished yet transcendent qualities are wonderfully uncertain. It’s not literally the feeling evoked in the statement “If I yelled from a mountaintop, will someone hear me?” but it does contain the rush of knowing you just missed that yell, and you are embraced by the stillness that follows and its universality, pathos, and humor. 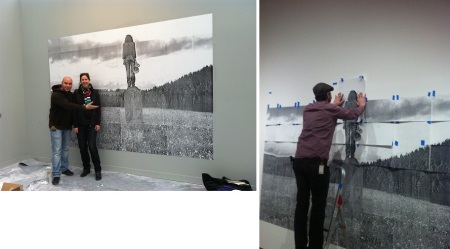 The copied sets of this conceptual work are what allow it to be included in both a LACMA-organized exhibition in Paris, Face to Face,  as well as in the exhibition back in Los Angeles, Lost Line: Contemporary Art from the Collection. The challenge was that neither team had ever installed the work, so between the desire of the curators and the art installers on each continent to be—and the inherent nature of the work being less so—we each had simultaneous but differing moments of Zen upon completion.

This entry was posted on Thursday, December 13th, 2012 at 10:20 am and is filed under Uncategorized. You can follow any responses to this entry through the RSS 2.0 feed. You can leave a response, or trackback from your own site.

One Response to Lost in Paris, Metaphorically Speaking