Just before the holidays LACMA opened a dramatic new installation of the American art galleries, titled Compass for Surveyors: Nineteenth-Century American Landscapes. I spoke to curators Austen Bailly and José Luis Blondet about the new installation, which examines not only the history of American landscapes, but also the very nature of LACMA’s collections.

As LACMA is contributing a large number of paintings and decorative arts to a major American art exhibition in Korea, it necessitated a reinstallation of the American galleries. How did you approach the reorganization of the galleries?

Austen Bailly: It offered an opportunity to rethink not just simple replacements but how to do something really different.

José Luis, is that how you became involved? You’re not a curator of American art—nor, for that matter, of any single curatorial area.

José Luis Blondet: Something that I like about my title, associate curator of special initiatives, is that it’s open and flexible. That allows me to work in these intersections or “in betweens.” I sit in the Education Department but with the mandate of working across departments. [As part of a larger education team], we were having conversations about challenges presented by the museum, and Austen brought up this problem—how to rethink the collection now that [many of] the masterworks were in Korea. She started talking about masterworks and I said “hold on a second—what does it mean to have a ‘masterwork’? What are the other paintings? How can we make sense of each work as an object and as a group? Are there good paintings and bad paintings?” We tried to answer that question as a team but there were no easy answers. It was a passionate discussion, and Austen and I decided to carry it on outside the Education team.

JLB: We started meeting every other Tuesday for American Coffee, researching the collection. Without a specific plan, we knew that we wanted to come up with an interesting and engaging way of reading the collection.

AB: We had a [shared] intellectual and creative enthusiasm for exploring a problem together.

JLB: We weren’t sure if the outcome of these meetings would be an exhibition though. It was an opportunity to look at the American art collection and see what kind of risks can we take in presenting it, how can we make a re-hanging that was focused, layered and inviting to the different audiences that visit LACMA. For me it was reassuring that Austen had the expertise in these objects, so in our American Coffee meetings, I had the freedom of saying whatever crazy idea I had, because I knew I was talking to someone with the deep knowledge of each object. It was a very effective partnership.

What sorts of conclusions did you come to through your conversations and research?

AB: In other words, what is there to be learned about place, about identity, through the works that have come into LACMA’s collection? If you isolate the holdings of American landscapes of the nineteenth century, you see the disparities and you think about where LACMA is physically as a museum. What does that show you? It actually teaches you that the traditions of landscape painting that were developed on the East Coast are very dominant. Even though many paintings were painted in the west, those weren’t really collected. It raises questions. Our hope is that the visitor will be able to see physically this kind of imbalance and learn something in a different way, rather than us putting up a didactic label that says “In traditional American art history canons, Thomas Cole is considered the father of the Hudson River school of landscape painting . . . ” That’s too boring.

How does this play out in the installation?

JLB: For this installation, we wanted to look at the collection as an inventory, not using traditional categories that define what is or is not a masterwork. We took advantage of different methodologies of display to tease out a variety of readings of the collection. We used a dense, almost salon-style installation for the majority of paintings, and on the opposite wall we lined up the five paintings of the western landscape. You look at these two clusters and many points of friction become evident. For us it was important not to “select” the paintings. Basically we are showing all of the landscape paintings from the nineteenth century [that are in LACMA’s collection], with the exception of the five on view in Korea.

What are some of the landscapes on display?

AB: We have a fairly liberal interpretation of landscape.

JLB: There are some paintings that you would think of as historical paintings. We’re also talking about the definition of a territory, a nation that is struggling to find an identity.

AB: For the East Coast, the key picture is Fitz Henry Lane’s Boston Harbor. It’s a foundational place in America; it’s one of our very best paintings in terms of quality. Next to it is a more historical example would be Emanuel Gottlieb Leutze’s, Mrs. Schuyler Burning Her Wheat Fields on the Approach of the British. Those wheat fields are in upstate New York; her husband was a general in the American Revolution.

JLB: Mrs. Schuyler is literally about to destroy the landscape in such a theatrical gesture. And by doing so, she is inaugurating a new, political landscape. We wanted those contradictions and paradoxes in the exhibit. 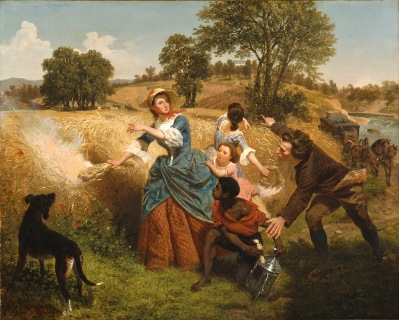 Is the disparity between Eastern and Western landscapes indicative of art history, or is it just a display of what LACMA has collected thus far?

AB: Art historically it is somewhat reflective of America’s westward expansion and the activities of artists that came west over time. Once you get to the twentieth century—and in a nearby gallery we are showcasing our California landscapes of the twentieth century—you have a proliferation of artists active here. But in the nineteenth century, artists active on the East Coast dominated the art market. Many East Coast artists are the ones who came west, showing their works in the east. American art history traditionally privileges east over west—and that gets reflected in collecting practices: LACMA is the largest museum west of Chicago, but western landscapes weren’t the [collecting] priority.

JLB: We started asking these questions—why do we have a majority of paintings from the East Coast? Does it have to do with the history of LACMA’s collection? The history of art? Then we started looking at the photography collection to see how this tension east-west played out there.

AB: We knew the inverse was going to be true for photography. You were asking whether it’s art historical or just our collection—it’s a little bit of both. Photography was invented in 1839, and was used extensively to document our expansion westward in what was called survey photography. Sure enough, when we started looking into the collections, our holdings reflected that. The collection has some nice examples of the east and major holdings of nineteenth-century western landscape photography; it wasn’t exactly the same proportions as the paintings, but roughly.

JLB: Perhaps this reflects how the west, more than a geographical category, it was an imaginary one, the shifting frontier. 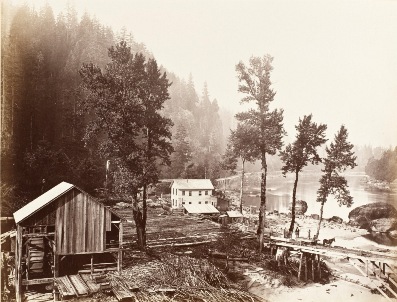 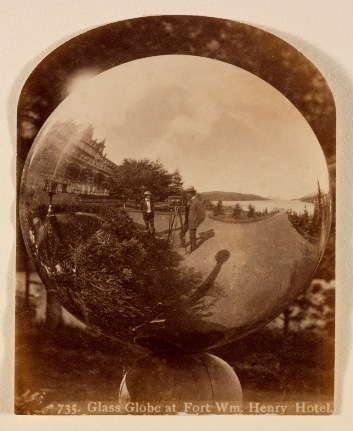 That goes back centuries—so many people can’t experience the New World firsthand, so the artists communicate it back. By the time of westward expansion, there’s still a need to ask “what is the west like?” But now they could see photographic documentation.

JLB: I think this show illustrates the fact that landscapes are constructions. Landscapes are never a photocopy of the land. There are many compositional rules at play, many subjectivities interplaying with what is out there. This show wants to deal with that impulse. One of the biggest surprises for me, researching the photography collection, was that some of the topics that we saw in the photographs from the East Coast were related to decadence, decay, ruins, floods.

AB: And the western photographs were of railroads, buildings, and the grandeur of the landscape. So we tried to mirror the installation: we have a very limited selection of photographs of the East Coast, and a plethora of photographs from the West Coast. We’re hoping that people will be able to dive into the imagery while appreciating the imbalance. With all that said, there are a few artworks in the exhibition that are not landscapes. One is a compass, on loan from the Autry Museum, displayed in the center of the gallery.

AB: The compass is a surveyor’s compass, which is where we got the title of the show.

AB: It’s very symbolic: we’re taking our location into consideration. [The position from which] we are surveying the collection informs the readings that we’re getting. You’re mapping certain territories but they’re contingent on your location.

The other very notable exception to your installation of landscapes is Thomas Eakins’s Wrestlers. How does this fit in with your themes?

JLB: It was going to be hard to relocate Wrestlers in any other gallery. At first we saw it as an obstacle, but then thought maybe we could use it to our advantage. We noticed that Wrestlers was made in 1899—that’s another important cue, the turn of the century. And the image of two bodies wrestling truly resonates with the idea of the tension between the east and the west, photography and painting, culture and nature . . .

JLB: Yes. This show wants to address that tension. So we decided to use that painting as a prominent cardinal point. We have the big painting on the north wall. And we decided to keep the study for the painting [also in LACMA’s collection] on the opposite wall, centering everything, with the compass in the middle. So Wrestlers, which is certainly one of our masterworks, and was an obstacle for us, became crucial for the installation and the reorganization of this gallery. We didn’t want to use the painting as a metaphor for anything else—this painting is a great painting and that’s why it deserves to be here—but certainly the subject of that painting, although it is not a landscape, is truly close to the topic of the show. 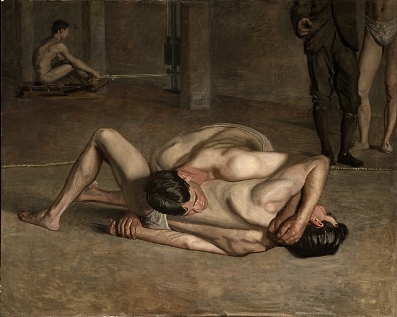 The Eakins painting brings us back to that original question that started your American Coffee conversations: what is a masterwork? Have you learned more about that since asking the initial question?

JLB: We didn’t want to answer that question but to move away from it! The invitation is to look at the singularity of these objects and look again at the many landscapes layered in the collection.

AB: The installation allows the visitor to make comparisons. The qualities of the works should really stand out.

This entry was posted on Monday, January 7th, 2013 at 6:08 am and is filed under Uncategorized. You can follow any responses to this entry through the RSS 2.0 feed. You can leave a response, or trackback from your own site.