Since 1986, LACMA’s annual Collectors Committee Gala has resulted in numerous important acquisitions in all areas of the museum’s collection. This weekend the Collectors Committee added nine more. For the event, Collectors Committee members create a pool for acquisitions funds and then use those funds to vote for artworks presented by LACMA curators earlier in the day. In the final tally, LACMA raised more than $3.2 million—a record for the event—toward seven artworks. On top of that, Collectors Committee sponsor JPMorgan made a gift of two more works from the JPMorgan Chase Art Collection: a photograph by Robert Frank, St. Francis and Gas Station, and City Hall—Los Angeles, from his iconic series The Americans; and a portfolio of seventy-five mixed-media works on paper made by Ed Ruscha in 1969, Stains.

Here’s a rundown of the artworks acquired over the weekend:

Mother and Child Figure for the Gwan Association, Republic of Mali, Bamana Peoples, 1432-1644 (carbon 14 testing), gift of the 2013 Collectors Committee with additional funds provided by Kelvin Davis and Bobby Kotick

The first African sculpture to be acquired in Collectors Committee history is a Mother and Child Figure for the Gwan Association is one of the oldest surviving wood sculptures from Africa. The figure embodies continuity of generations and represents the strength and resilience of motherhood. This important acquisition marks the launching of LACMA’s new African art gallery and related educational and outreach programming. The gallery’s inaugural exhibition will be Shaping Power: Luba Masterworks from the Royal Museum for Central Africa, on view from July 7, 2013 to January 5, 2014. 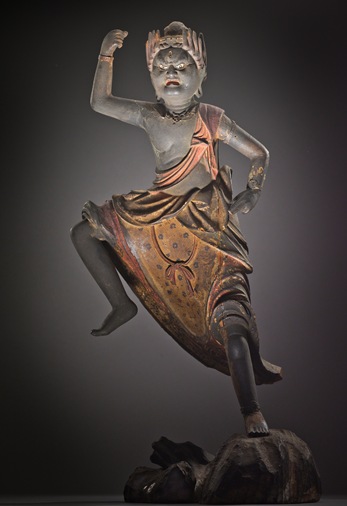 This wood sculpture of a Shinto deity features three crystal eyes and retains its original colors and surface from the late twelfth century; it is the oldest and finest sculpture of its type in existence.

A rare Korean cast iron Buddha sculpture from the tenth century Goryeo dynasty depicts the historical Buddha Shakyamuni’s Enlightenment at Bodha Gaya in India; this acquisition makes this the largest example of Goryeo Buddhist sculpture outside of Asia.

Mural: Virtual Circles is paradigmatic of Julio Le Parc’s visual experimentations with kinetic and optical effects, as well as his life-long interest in viewer participation. Seen from the front, the sculpture is deceptively static, but with just a slight displacement from the viewer it becomes fully activated, at once dizzying and alluring. This sculpture is already on view now, in our new permanent galleries for Latin American art. 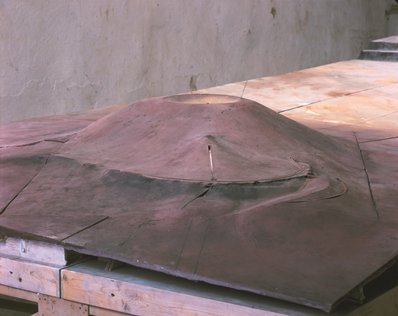 This large-scale model of James Turrell’s ongoing project, Roden Crater is made from plaster as well as elements from the crater itself and includes details of the geologic contours, textures, and colors of the Arizona site in relation to the exterior of artist’s planned transformations. It will be on view as part of James Turrell: A Retrospective, opening May 26, 2013 and running through April 6, 2014.

Thomas Demand’s Control Room shows the interior of the Daiichi power plant in Fukushima following the East Japan earthquake and tsunami in 2011, based on a cell-phone snapshot, recreated by the artist as a full-size paper model, and then photographed.

Woman behind Mashrabiya I, by Egyptian-German artist Susan Hefuna, depicts the elusive silhouette of a woman in full hejab behind a mashrabiya, a latticed wood window screen characteristic of traditional Islamic architecture. Hefuna’s use of the mashrabiya not only reflects her own personal East-West dichotomy, but also serves as a reminder that our visual perceptions are often culturally encoded.

This entry was posted on Monday, April 15th, 2013 at 10:53 am and is filed under Uncategorized. You can follow any responses to this entry through the RSS 2.0 feed. You can leave a response, or trackback from your own site.