Beyond “See the Light”: The Marjorie and Leonard Vernon Collection on View throughout LACMA

A good number of exhibitions currently on view at LACMA—a total of seven—feature photographs from the Marjorie and Leonard Vernon Collection. The collection, a gift of the Annenberg Foundation and acquired from Carol Vernon and Robert Turbin, is comprised of 3,600 photographs that span the entire history of photography. While the near entirety of the medium can be traced in the exhibition See the Light—Photography, Perception, Cognition: The Marjorie and Leonard Vernon Collection, the history of landscapes, architecture, politics, and icons can be seen throughout numerous exhibitions at LACMA that feature works from the Vernon collection.

Little Boxes: Photography and the Suburbs, which closes this Sunday, offers an examination of the suburb in its heyday, from postwar 1940s to the 1990s. Max Yavno’s photograph from 1947, Keyboard Houses, San Francisco, gives us a glimpse into what the city was like before the tech and finance industries became part of the urban fabric. The houses, which appear very ordinary in the high-contrast photo, are now widely considered icons in the built environment of San Francisco.

Other postwar images—but this time, the Civil War—are explored in the work of George N. Barnard, whose work is part of the exhibition Compass for Surveyors: 19th-Century American Landscapes. The photo above, taken right at the end of the Civil War, shows Charleston, South Carolina, in ruin. A lone figure sits at the center of the frame, ostensibly contemplating the ravages of war. Barnard’s photograph, Fort Sumter, Exterior, 3 1/2 Miles from Charleston (below), also from the same year, shows the site where the war began. The mass of land that was once the locus of the Confederates now appears, after the war, to offer resignation.

Down to Earth: Modern Artists and the Land, before Land Art, which closes next week, looks at works that explore the connection between humans and the earth. Edward Weston’s abstracted photograph of Point Lobos in Monterey, California, focuses on forms created by nature found in the sand on the beach. It was during this time that Weston made some of his most iconic images with objects found in the natural world such as the vegetables, sand dunes, shells, kelp, and, of course, the nude. Weston was intrigued by the unusual lines and contortions he noticed in objects, photographing them as abstracted works of art. These images made by Weston communicated to the world what the West, and namely California, was like between the two wars.

Weston developed his oeuvre in Mexico, where he intersected with yet another influential figure, Gabriel Figueroa, whose immense body of work is the subject of the exhibition Under the Mexican Sky: Gabriel Figueroa—Art and Film. The photographer captured images that were nearly parallel to stills from Figueroa’s films. The work Maguey, Texcoco, Mexico, from about 1936, could be placed in many films by Figueroa. The look of the Mexican landscape was incredibly consistent, especially after the Mexican Revolution of the 1910s. The Mexico translated by Weston and Figueroa was that of a heroic landscape. 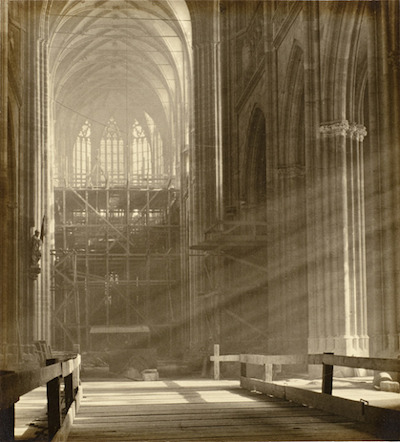 The photographer Josef Sudek, known as the “poet of Prague” captured the city’s St. Guy Cathedral for nearly five decades. The presence of Prague, the setting for Paul Wegener’s 1920 film Der Golem: Wie er in die Welt kam (The Golem: How He Came into the World), is also felt in the exhibition Masterworks of Expressionist Cinema: “The Golem” and Its Avatars through Sudek’s photographs of the city. His images feature extreme perspectives and dramatic light effects, and the photographs established the cathedral as a presence in the city. Sudek’s portfolio of St. Guy Cathedral began in 1928, upon a commission of a restoration of the building. Throughout the series, Sudek is able to play witness to some of the darkest days of Prague, presenting haunting images as document. 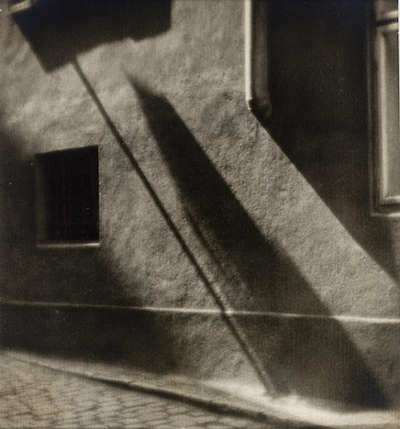 Talk of Town: Portraits by Edward Steichen from the Hollander Collection presents Steichen’s work that circulated through print magazine. It was during time—the first half of the 20th century—that mass media began to figure out what it was and how it could transmit ideas via images and text, and Steichen was a willing participant through his work in Vanity Fair and Vogue. Magnolia Blossom, Voulanglis, from about 1921, is a representation of his pictorialism that would set a new standard for photographers whose work would also be used in magazines and in galleries.

In the last two centuries, art history has had to be reconsidered upon the entry of photography into the list of media. These seven exhibitions rely heavily on the role of photography to tell the entire story, and the Marjorie and Leonard Vernon Collection has been invaluable in making this possible.

This entry was posted on Wednesday, November 27th, 2013 at 2:04 pm and is filed under Uncategorized. You can follow any responses to this entry through the RSS 2.0 feed. You can leave a response, or trackback from your own site.