Watching while an artist uses a slingshot to catapult a paint-coated tennis ball onto a wall is a unique experience—but working directly with the artist, and being the one to actually launch the ball, is even more memorable. This was the realization a group of elementary school students arrived at recently when they worked with Los Angeles–based artist Kaz Oshiro in preparation for his LACMA-organized exhibition Kaz Oshiro: Chasing Ghosts.

Opening January 24, 2014, at LACMA’s satellite gallery within Charles White Elementary School near MacArthur Park, the show will feature new work from Oshiro, artworks he selected from LACMA’s collection, and collaborative paintings he made with the students. To create the collective artwork, Oshiro first met the children through grade-level assemblies, where he discussed ways that unconventional tools and processes could be employed to create paintings. To a score of involuntary gasps from the children, Oshiro demonstrated both invented and established techniques for making art, including blowing paint through a tube and sweeping pigment with a broom. 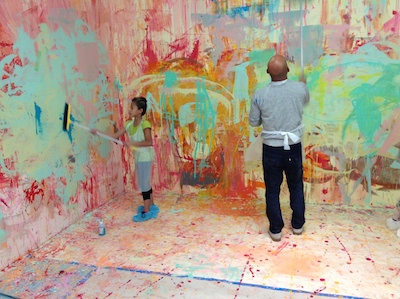 Artist Kaz Oshiro works with a student on a collaborative painting project.

The third-, fourth-, and fifth- grade students experimented with these devices, working directly with Oshiro to create paintings. In addition to using conventional art-making tools, the students swept paint over a canvas with cleaning brushes, poured acrylic from teapots, and, of course, operated the makeshift slingshot. As they worked, they compared the range of effects. Scraping a squeegee across a surface, for example, created thick, bold strokes, while squeezing paint from a bottle formed thin, organic arcs that dripped from gravity. 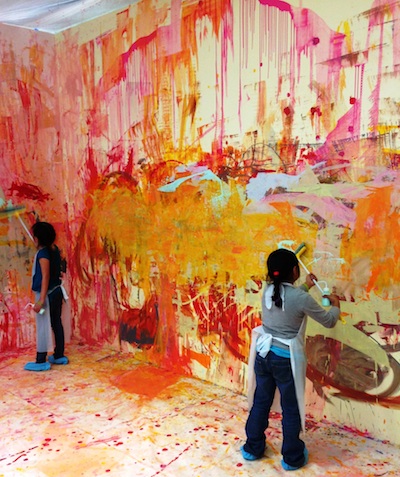 Students use brushes and squeeze-bottles to contribute to Oshiro’s collaborative wall painting.

By far the most popular tool was the stationary bicycle, which required four people to operate: one to pedal, two to deflect splatters with umbrellas, and one to hold a trough of paint next to the wheel. Students suited up in plastic aprons, ponchos, and shoe covers, and took turns in each position. The children pedaled feverishly while Oshiro held shallow vessels filled with different colors just barely against the tire, spraying paint in compelling patterns.

The surprising marks the students generated through these devices defy the humble nature of the tools that created them. Drips, splashes, and smears serve as documents of the students’ experiments and the physical nature of their process. Inadvertently, the resulting artworks are also an expression of the children’s expanded mindset regarding the limitless possibilities for creating art and what constitutes a painting.

Students operate a stationary bicycle to create paint splatters on the wall.

View this project, and more of Oshiro’s work, at the opening-night celebration of the exhibition Kaz Oshiro: Chasing Ghosts on January 24 from 6 to 8 pm. Discover more of Kaz Oshiro’s work here.

This entry was posted on Thursday, December 19th, 2013 at 3:30 pm and is filed under Uncategorized. You can follow any responses to this entry through the RSS 2.0 feed. You can leave a response, or trackback from your own site.

One Response to Beyond Paintbrushes: Creating Art with Kaz Oshiro