The subject of fútbol—or soccer—nicknamed by one sports commentator as “the beautiful game,” touches on issues of nationalism and identity, globalism and mass spectacle, as well as the shared human experience between spectators from many cultures. As the 2014 World Cup takes place next month in Brazil, LACMA mounts an exhibition featuring approximately thirty artists from around the world who examine the sport through video, photography, painting, sculpture, and large-scale installation. Franklin Sirmans, Terri and Michael Smooke Curator and department head of contemporary art, sat down with Insider’s Linda Theung to talk the exhibition Fútbol: The Beautiful Game.

Linda Theung: Why are you interested in representing the sport of soccer through an art exhibition?

Franklin Sirmans: Like other exhibitions, there’s something underlying that you think needs to be explored. Unlike many other exhibitions, this happens to be one of those things where you are already obsessive about it. Your obsession drives you to explore different ways of examining the subject. The format of an exhibition presents a perfect opportunity for such an exploration. Writing is another way to look at such a topic.

Theung: Tell me a bit more about your obsession. How do you begin to cultivate an intellectual interest in something that is often seen as purely physical?

Sirmans: I’m thinking about where that transitional moment occurs. As a curator, I’ve been fortunate to be able to take certain personal obsessions and spin them, or look at them, or, for better or worse, intellectualize them. This is not limited to fútbol; I’ve done exhibitions about sports as they pertain to America. And exhibitions about music, to take another obsession. And even about, to some degree, my obsession with spirituality—not, by any means, obsessing about spirituality as it relates to any specific religion, but about the idea of spirituality. I’m interested in intellectualizing the quotidian.

Sirmans: In this case, it’s also listening to artists, and all of a sudden looking and thinking: there’s a lot of work about this subject.

Theung: Why is it, do you think, that artists are responding to soccer in particular, and so consistently? In the works in your show, there’s a repeated representation of the grid of the soccer ball and the physical nature of the sport.

Sirmans: I think partly it’s the blanket fact that soccer is the most obsessed-about sport in the world, and so artists, being a subpopulation, will be somewhat proportional in their interest. It’s interesting to engage with international artists and see a thread of similarity in their consideration of the sport. And the aspect of fútbol plays out even bigger globally than it does in the United States.

Theung: Why do you think the U.S. hasn’t really picked up on the interest in soccer? Many sports writers have asked this question. One thought is that it’s a low-scoring game. 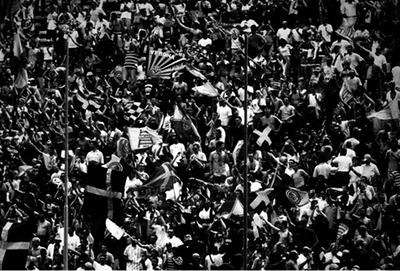 Sirmans: I think there is definitely something to that, and in the American imagination, the two more popular sports are basketball and football.

Sirmans: NASCAR seems to be a bit more regional. But the idea of numbers is definitely supported if we look around out there. And soccer is not something that can be claimed here, in a way, and therefore you have to work against that idea in the market.

Theung: What do you mean by claimed?

Sirmans: It’s not like basketball. The sport didn’t originate here. It’s not American football. It’s a wonderful, amazing import. But it wasn’t made here. Though the U.S. appeared early on the international stage.

Theung: More so than in other parts of this country.

Sirmans: Absolutely. This city has two Major League Soccer teams. I don’t think any other city can say that. Some of the best players are in Los Angeles. It is the perfect place to further explore the idea. Connecting back to the idea of the 2014 World Cup being in Brazil, the interest in the South American population vis-à-vis the game is immense. The first World Cup was in South America. With the demographic in Los Angeles, it seems like a perfect fit.

Theung: And the Olympics in 2016 are in Brazil, so it’s a double feature of really prominent sporting events.

Sirmans: It’s good and bad. Fútbol and FIFA are usually ahead of the crowd in terms of determining the next area of geographic interest. The Olympics tend to be safer in their selection of host countries. If we talk about where the next three World Cups will be, we’re looking at Brazil, Russia, and Qatar, on the heels of the first cup in Africa four years ago. This year the Venice Biennale, which began in 1898, will have its first African curator. No South American or Middle Eastern curator yet.

Theung: Considering the diversity of countries that the World Cup will touch, will the exhibition deal with the political or geopolitical nature of the sport?

Sirmans: To some degree, yes. There are works that touch upon those things. We have some ideas for programming that will make the exhibition very relevant, and it’s interesting to think about fútbol’s position around the world, and politically and socially. There’s a wonderful book about how soccer explains the world [How Soccer Explains the World: An Unlikely Theory of Globalization (2010), by Franklin Foer] that shows how you can document the world’s changes through soccer. When the first World Cup was given to Uruguay in 1930, it was a way of celebrating that country’s first hundred years of independence. Also, see Simon Kuper on how it doesn’t!

Theung: In antiquity, athletes were often subjects in art. They represented the classical ideal. One of the artists in the exhibition, Chris Beas, harkens back to this mode of representation in his paintings: his athlete figures are depicted in a celebratory, almost mythic light. On the other hand, the athletes featured in Generic Art Solutions’ works are almost caricatures, almost comedic. There’s an interesting juxtaposition between these two artists: the serious depictions of great athletes and exaggeration of emotion with soccer players holding each other, like in a pietà.

Sirmans: And the work also touches upon, coincidentally, the expressionism of Italian players. It’s making humor out of the exaggerated physicality that happens on the field. And in Chris’s case, he’s dealing specifically with obsession. He’s only painting the team he follows: Manchester United. All the red and white is not simply a graphic choice, but it relates to that team specifically. He’s going for myth. He doesn’t really paint any of their players before the 1970s. They’re these heroic, idealized individuals who are no longer held up to scrutiny but who are essentially martyrs to their cause.

Theung: It reminds me of neoclassicism and the way artists in the eighteenth century mythologized their ideas of figures in antiquity. I’m curious, how is soccer unique among sports in this country?

Sirmans: Like basketball, its simplicity is appealing. It crosses borders. It’s just that one ball. You don’t need a lot of equipment. It’s a sport that has accessibility.

Theung: Right. Soccer is accessible, despite climate and location. It’s easy to have a pick-up game with soccer. Even when you look at the Olympics, and specifically the winter games, it’s all European countries, and in the summer, it’s all non-European countries. It brings up the political aspect.

Sirmans: There was an article in the New York Times about the pick-up games in Brazil. The idea of community is very important. There’s a piece in the show, by Gustavo Artigas, about community and how communities that play different sports see one another. It shows two teams of basketball players and two teams of soccer players. They all play in the same space.

A version of this article originally appeared in the winter 2014 (volume 8, issue 1) of LACMA’s Insider.

This entry was posted on Monday, February 24th, 2014 at 7:30 am and is filed under Uncategorized. You can follow any responses to this entry through the RSS 2.0 feed. You can leave a response, or trackback from your own site.

9 Responses to Interview with Curator Franklin Sirmans—Fútbol: The Beautiful Game