Recently, thanks to the generosity of Ronald A. Belkin, LACMA received an important work by the 19th-century Mexican painter Felipe Santiago Gutiérrez (Mexico, Texcoco, 1824–1904). To commemorate the occasion, we invited James Oles to give a lecture on the importance of the work. What follows is a conversation between Dr. Oles and LACMA’s curator and department head of Latin American art Ilona Katzew about this poignant picture, the first 19th-century Mexican painting to enter the collection. 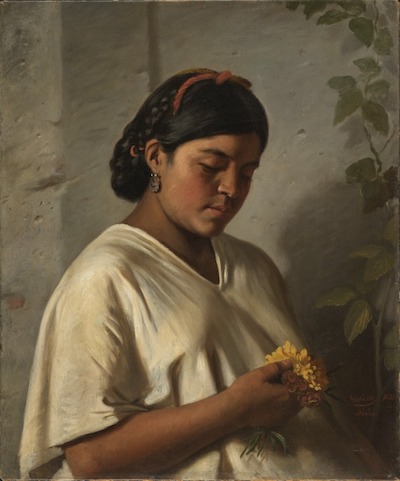 Ilona Katzew: Jay, you recently published an impressive survey of the history of Mexican art and architecture from the Conquest to the present; in it you feature Felipe Santiago Gutiérrez, the artist of the wonderful painting that was recently gifted to LACMA. What can you tell us about Gutiérrez’s training and artistic trajectory?

James Oles: Gutiérrez isn’t so well known today, but he really was a key figure in the 19th century: he was born in Texcoco, near Mexico City. At the not-so-surprisingly young age of twelve he enrolled in the Academy of San Carlos in Mexico City and studied there until 1848 when he was invited to Toluca to teach; he then returned to the Academy in 1855 to continue his studies. Actually, for the rest of his career he hardly stayed in any one city for long, traveling all over Mexico, the US, Europe, and South America; he was particularly important in the professionalization of arts education in Bogotá, Colombia, in the 1870s and 1880s. He worked in almost every genre, but while I think his costumbrista images (scenes of everyday life) are really compelling, I only included one work by him in my book, and that was an example of his more serious, earlier academic work, a history painting called The Oath of Brutus of 1857 (Museo Nacional de Arte, Mexico City), as an example of how neoclassicism, as a style and a theme, had a long life in Mexico’s Academy.

IK: It is interesting that, after Santiago Gutiérrez enrolled in the Academy in 1836, he studied with the Catalan painter Pelegrín Clavé (1811–1880), who had arrived in Mexico in 1846. Clavé, as you know, was one of several European professors charged with reorganizing the school (the Academy was then facing massive financial constraints). He was a highly influential figure, renowned for his portraits that often provide a sense of the psychology of his subjects. The portrait of this woman is somewhat of a mystery. Do you have a sense of who the sitter might be?

JO: Well, the original title is lost, which is a problem–and I wasn’t able to definitively connect this work to a title mentioned in one of the period reviews of his exhibitions; it almost looks like a specific portrait, and Gutiérrez was adept at portraiture, but this is really more of a genre painting, a quite sympathetic representation of a “type” (the pregnant mother) with a moral or allegorical message. She is depicted gazing at a marigold, a flower the Aztecs associated with death and that is still featured on Day of the Dead altars, perhaps as a sentimental reference to infant mortality. There were actually a few paintings done at the time employing similar compositions, of women looking at flowers or empty cribs or other fraught images, though they all tended to be white. I bet he used a live model, perhaps a servant (as Diego Rivera would do later), but at this time, it would have been surprising if he had recorded her name.

IK: Everyday subjects were of particular interest among 19th-century academic artists. How does the picture draw from other local traditions, such as 18th- and 19th-century depictions of racial types and trades, and what elements, in you estimation, sets it apart?

JO: I was interested to discover that Gutiérrez met Gustave Courbet (1819–1877) in Paris in the early 1870s, though I am not sure how close the connection was. This might have sensitized him to debates about Realism, to the idea that one might seek to ennoble the working class. I don’t think this picture has much to do with 18th-century casta paintings (the depictions of racial mixing which today are quite well-known); instead, undoubtedly it was inspired by images of “types,” in which local or national identity was embodied in working class figures, often isolated on the canvas or in a photograph, like the molendera—the woman grinding corn—or the aguador, or waterseller. The date of the picture, 1876, is precisely when the photographers Cruces and Campa were making their famous images of types, some of which included indigenous women. Here the hairstyle and white huipil (a loose blouse with origins in the pre-Conquest period) probably indicates she is an Otomí; another work by Gutiérrez indicates that he painted Otomí Indians in the town of Huixquilucan, which is now a fancy suburb of Mexico City, but was then quite rural and remote.

IK: Felipe Santiago Gutiérrez, as you noted, was an extremely peripatetic artist. He traveled incessantly in Mexico, the United States, South America, and Europe. His influence and connection with artists in the many cities he visited (including San Francisco and New York) remains a fertile yet largely uncharted chapter of his career. Was this a typical trajectory for a 19th-century Mexican artist? What can you tell us about academic Mexican artists “north of the border?”

JO: Well, most of the leading 19th century Mexican artists went to Europe at some point, with or without a scholarship from the Academy, in order to perfect their studies, though fewer visited the US. The great landscape painter José María Velasco (1840–1912) also got around, for he served as a sort of cultural ambassador during the Porfirian regime, charged with the fine arts displays at the late 19th-century world’s fairs in Paris and Chicago, for example. But Gutiérrez’s frenetic itinerary wasn’t typical, not at all. As for the experience of Mexicans north of the border in the 19th century—and actually, a key figure here is the Cuban poet and art critic José Martí (1853–1895), who worked in both Mexico City and New York—well, there is a lot more research to be done about that, but I’m not surprised someone with formal academic training, like Gutiérrez, would have found patrons in San Francisco in the 1870s: there were a lot of newly rich people there and it was still sort of the frontier.

IK: Finally, Jay, why do you think the 19th century has been more neglected than other areas in the United States, and why is the acquisition of this painting especially significant for a major US museum?

JO: 19th-century Mexican art is the subject of extensive study in Mexico, as you know, but it is true that it has been generally (despite great work by a few of our colleagues) neglected in the US, in part because there are so few works from this period in this country. There are only three or so paintings by Velasco in US public collections, and he was the most famous artist of his day, but basically, this period just wasn’t appreciated by curators or collectors here. First of all, a lot of it didn’t look very “Mexican,” and there was also a lingering anti-academic prejudice: the Mexican Renaissance of the 1920s was predicated on a rejection of most 19th-century art, and that rejection echoed through academia and museums for a long time. And today, great examples rarely come on the market—there are avid collectors in Mexico, and also deep holdings in the national collections. So this work, which might have been exhibited in San Francisco and sold to a local collector soon after it was painted (though that is speculation on my part) is really fantastic, because it serves as a necessary hinge for LACMA, where there is a huge gap between the museum’s rich holdings of viceregal and modern art. To the extent that LACMA hopes one day to provide a sweeping overview, works from the “forgotten century” are going to have to be brought back into the narrative: Flower Day, Rivera’s respectful homage to indigenous culture of 1925, after all, didn’t come from out of the blue.

IK: You make a very good point here. Rivera’s picture draws as much on cubism as on Mexico’s earlier traditions. The 19th century is unquestionably an area that we have our eyes set on for future collecting, which makes the accession of Felipe Santiago Gutiérrez’s painting especially relevant.

This entry was posted on Tuesday, May 27th, 2014 at 11:19 am and is filed under Uncategorized. You can follow any responses to this entry through the RSS 2.0 feed. You can leave a response, or trackback from your own site.

One Response to LACMA Acquires Its First 19th-Century Mexican Painting