When visiting the Expressionism in Germany and France: From Van Gogh to Kandinsky exhibition, you will notice several striking paintings and prints by the German artist Max Pechstein (1881–1955). Although he may not be as well known today as some of the other Expressionist artists such as Ernst Ludwig Kirchner, Emil Nolde, or Wassily Kandinsky, Pechstein nonetheless played a crucial role in the breakthrough of Expressionism. Many contemporaries, notably the art critic Paul Fechter, who published the first book on “Expressionism” in 1914, even considered Pechstein, the leading member of the Brücke group (much to the dismay of Kirchner). But what is particularly striking about Pechstein is his long and rich career and how it was forged through the dramatic events of the first half of the 20th century: he survived both World Wars and was held prisoner by the Japanese in 1914 and the Russians in 1945. 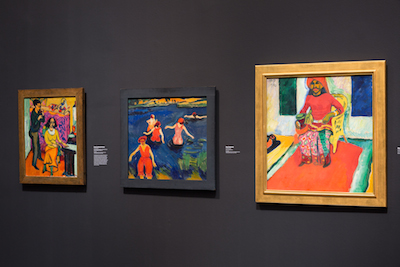 Pechstein had quickly become famous in the years before World War I. He was the first Expressionist artist to join the venerable ranks of the Prussian Art Academy in Berlin, and he also obtained several state commissions during the Weimar Republic. When the Nazis rose to power, however, Pechstein was considered a “degenerate artist,” and his works were included in the Entartete Kunst (“Degenerate Art”) exhibition next to artworks by other modern artists such as Kandinsky, Paul Klee, and Kirchner. 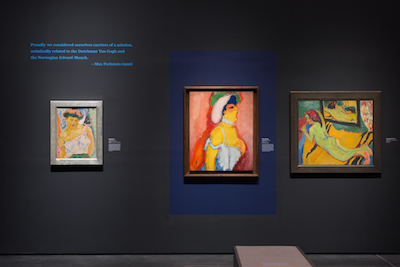 Pechstein started his career as an apprentice decorator before enrolling at the Dresden School of Applied Arts, where he studied decorative and monumental painting. He then studied at the Dresden Academy of Fine Arts, where he received an academic training in drawing and painting. In 1906 he met Erich Heckel, who invited him to join the Brücke group, which had been founded in 1905 in Dresden by Heckel, Kirchner, Karl Schmidt-Rottluff, and Fritz Bleyl. In 1907 Pechstein was the recipient of the Rome Prize, which allowed him to travel to Italy. On his way back from Italy in late 1907, Pechstein went to Paris, where he stayed until mid-1908. During his sojourn in Paris, he saw exhibitions of Van Gogh’s works at galleries and visited the Salon d’Automne and the Salon des Indépendants, where works of the young French and international avant-garde were presented to the public. He also met the Dutch painter Kees van Dongen (a member of the Fauves), whom he invited to join the Brücke. Pechstein’s Young Girl, on view in the exhibition next to a painting by Van Dongen, testifies to his exposure to Post-Impressionism and Fauvism; he started to experiment with broad zone of colors painted in loose brushstrokes. Pechstein had mixed feelings, however, about his stay in Paris and went back to Germany to pursue his search for a unique visual language. But even back in Germany, Pechstein kept up with new developments in French art, acknowledging also the importance of German private and public collections for avant-garde art; he wrote later that year: “I once heard it said that in order to see . . . good French [art] one has to go to Germany.” 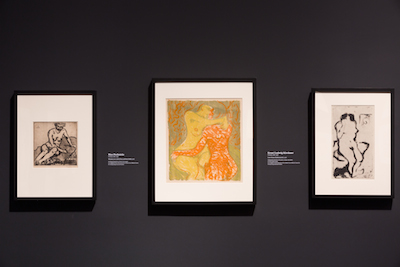 In 1908 Pechstein moved to Berlin, and he was followed shortly by the other Brücke members. He started to present his paintings at the Berlin Secession. At the beginning of 1909 the Galerie Cassirer in Berlin organized a Matisse exhibition, hung by the artist himself. Pechstein, together with Kirchner and Schmidt-Rottluff, visited this show and were very much taken by the French artists, writing that Matisse was “at times very wild.” Starting in 1909, Pechstein frequently stayed in the fishing village of Nidden on the Baltic Coast. Drawn to the representation of untamed nature, he presented the Baltic Sea and the daily life of fishermen in bold, vivid colors, flattening the space, as can be seen in his Beach at Nidden, also on view in the exhibition. 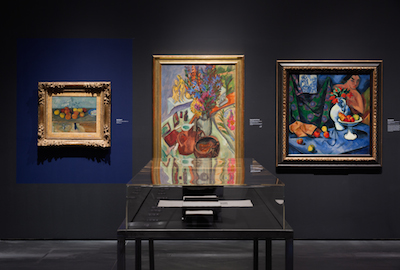 Still Life with Nude, Tile, and Fruit, another painting in the exhibition, shows how Pechstein abandoned Fauvism and started to experiment with angular forms inspired by Cézanne. This painting is also a testimony to Pechstein’s growing fascination with non-European civilizations, which was inspired notably by Paul Gauguin’s paintings from Tahiti. Pechstein and his wife, Lotte, travelled to the Palau islands in the South Pacific in 1914, a German colony at the time.  He described what he found there as an “earthly paradise,” and echoes of this trip can be found in his book Reisebilder (Travel pictures), published in 1919. Pechstein also frequently used motifs discovered on this journey in later works, which can be seen in the exhibition Visions of the South (read more about it here). With the outbreak of World War I in 1914, Pechstein was forced to leave the South Pacific—he returned to Germany through an adventurous detour, which brought him first to New York. In 1915 he enlisted in the German army and fought on the western front. After the war, Pechstein became more and more politically involved and was one of the cofounders of the “Novembergruppe” (November group) in 1918, a collective of left-oriented artists who campaigned for a renewal of the artistic milieu in Germany. But when the Nazis came to power, he soon became a victim of their repressive measures and was forbidden to paint or exhibit. After World War II, Pechstein’s major contribution to art in Germany was recognized, and his works were frequently shown. Despite this, his artistic importance remained overshadowed by that of his former Brücke colleagues and notably by Kirchner.

In Expressionism in Germany and France: From Van Gogh to Kandinsky you will see paintings and prints by Pechstein next to those by other Brücke artists and Fauves. You also will be able to discover the major role Pechstein played in the evolution of Expressionism, especially the transformative early years of his career in contact with French art—especially with Paul Cézanne, Paul Gauguin, and Henri Matisse.

And don’t forget to stroll through our permanent collection too and discover even more works by Pechstein in the Modern Art galleries.

This entry was posted on Wednesday, July 2nd, 2014 at 7:30 am and is filed under Uncategorized. You can follow any responses to this entry through the RSS 2.0 feed. You can leave a response, or trackback from your own site.