The Written Image: Books and Portfolios from the Rifkind Center

When you hear the names of Ernst Ludwig Kirchner, Erich Heckel, and Karl Schmidt-Rottluff, you might think of the colorful, expressive, and often large-scale paintings that they did in the early 20th century—many examples of which can be seen in Expressionism in Germany and France: From Van Gogh to Kandinsky, currently on view in the Resnick Pavilion. Lesser known is their more intimate work; indeed, the young generation of German avant-garde artists favored printmaking in addition to painting. The newly opened permanent-collection installation The Written Image presents selected works from the Robert Gore Rifkind Center for German Expressionist Studies and the Prints and Drawings Department at LACMA and explores the rich and varied dialogue between the written word and the print in its various manifestations.

In the early 20th century, prints produced as single sheets, portfolios, books, and periodicals became a favorite means of expression for artists, since they were able to use these media to execute relatively inexpensive original art rapidly and widely disseminate it. For instance, emerging artists were hired to create illustrations, which would then be inserted in avant-garde periodicals such as Der Sturm (The Storm) or Die Aktion (The Action). For many of these young men and women, it was their first opportunity to publish work and make a living off art. 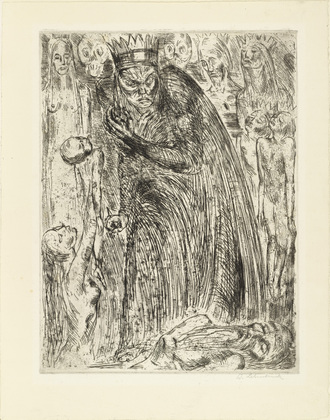 Expressionist artists found a major source of inspiration in literature, turning to classic and modern publications alike. The works of the renowned German writer and poet Johann Wolfgang von Goethe and those of the famous English playwright William Shakespeare provided the artists with popular narratives, which they reinterpreted in highly expressive prints. Other Expressionists turned to more contemporary writers: the English poet Oscar Wilde, who had died in 1900, became another major source of inspiration. His poem The Ballade of Reading Goal became a favorite text for the young generation of artists and was illustrated by many, notably Erich Heckel.

Some artists would also write poems or plays and illustrate them. With his book The Dreaming Boys (Die träumenden Knaben) from 1908, the Austrian artist Oskar Kokoschka created an original work combining lithographs and text. Although initially commissioned by the Wiener Werkstätte (Viennese Workshop) as a children’s book, Kokoschka’s poems about sexual longing and the accompanying, often suggestive, prints are removed from children’s tales and lean toward an original form of Bild-Dichtung (poetry with images) composed in a very expressive and provocative style.

Besides the written word, the book itself became also a medium for artistic creativity—from the cover, dust jackets, and bindings to the frontispieces, title pages, and endpapers. The original graphics created by artists to adorn the book became works of art in their own right. Especially for their catalogues raisonnés, artists such as Ernst Ludwig Kirchner and Emil Nolde would give free rein to their artistic imagination, contributing original prints to further single out their work. Kirchner in particular excelled in combining image and text in his simplified, rough-hewn woodcuts.

After World War I, illustrated books and printed portfolios became increasingly popular with collectors. This was due in large part to several German publishers and art dealers, who often worked directly with the artists and commissioned specific works. The art critic and collector Paul Westheim was the editor of the progressive art journal Das Kunstblatt (The Art Sheet) and also launched the portfolio series Die Schaffenden (The Creators), published between 1918 and 1932, which featured original prints by artists such as Erich Heckel and Max Kaus. By the 1920s, books and the distinctly German phenomenon of the print portfolio had become the central means of presenting modernist innovations, from Dada to the Bauhaus experimentation with type fonts and graphic design.

LACMA is one of only few institutions in the US to own such an exceptional collection of early 20th-century illustrated books, periodicals, and portfolios. Rarely on view, this exhibition is a wonderful opportunity to discover the variety of book illustration and print making in early 20th-century Germany.

This entry was posted on Monday, July 28th, 2014 at 7:30 am and is filed under Uncategorized. You can follow any responses to this entry through the RSS 2.0 feed. You can leave a response, or trackback from your own site.