Learning from the Tradition: Conservators Store Kimonos in the Japanese Style

Kimono for a Modern Age, currently on view in the Pavilion for Japanese Art, showcases how kimono designs evolved to integrate traditional and modern patterns with new chemical dyes and textile techniques during the first half of the 20th century. As a summer intern in LACMA’s Conservation Center, I had the privilege of walking through the show with Catherine McLean, the head of Conservation in the Textiles Department.

Walking through the exhibit, I was captivated by the pristine and natural display of each costume. The kimonos hang delicately with their arms straight out and the material extended flat on the surface of each wall. The fabric of the kimonos appear entirely smooth and wrinkle free, allowing viewers the opportunity to appreciate the beauty of each patterned design. 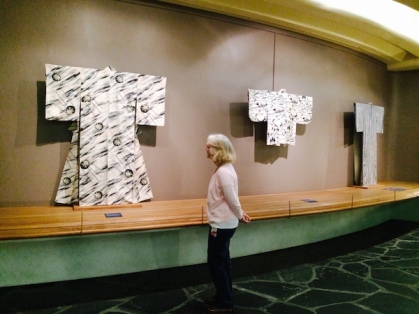 As I began talking to McLean, however, I soon learned the appearance of effortless perfection had not been the case behind the scenes. McLean explained that while the garments now seem smooth and crisp, it had not been easy to make them look that way.

The textiles conservation team had struggled to find a way to properly store the kimonos, especially given the fact that LACMA has substantial holdings of the traditional garments. At first, McLean explained that the Costume and Textiles Department tried to store the kimonos using a Western technique. In conservation practices in the West, conservators usually attempt to eliminate sharp creases so that the materials do not wear down along folds. In an attempt to adhere to this method, McLean and her team lined the folds of each kimono with long cotton pads and tried to fold the material as few times as possible. 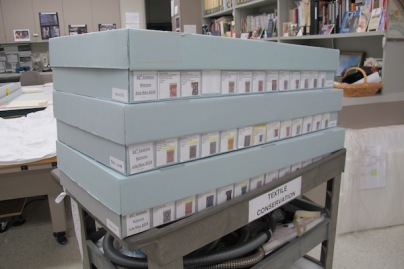 This method took up a significant amount of time and space. What’s more, when the conservators took the kimonos out of storage, they found that they had become rumpled and wrinkled.

Thus, after years of storing the kimonos in the Western style, McLean, the team in the Conservation Center, and Sharon Takeda, senior curator and department head of Costume and Textiles, decided that they would draw instead from centuries of Japanese ritual and culture and begin folding the kimonos in the traditional style. In contrast to conventional conservation methods, the Japanese actually welcome creases as a sign of proper folding. There is a very precise way of folding and storing kimonos in Japan. There are even specifications about which arm should be folded over the other. (Left over right means that the kimono’s owner is alive, and right over left means she is dead.) In order to get all the details right, McLean asked Rika Hiro of the Conservation Center to teach an informal class to McLean and her team on how to fold LACMA’s kimono collection in the traditional style.

The traditional method of folding kept the kimonos from wrinkling in unwanted places and allowed them to be stored in a compact, transportable manner. In fact, after using the traditional method to fold the material, all 35 kimonos in the current exhibit fit into just three flat boxes.

Looking back, McLean isn’t surprised that the department ended up using traditional methods to store the kimonos. The Japanese have been wearing and storing kimonos for centuries, but modern conservation techniques were only truly formalized in the past several decades. Sometimes, it turns out, it makes more sense to learn from the cultures that we are trying to preserve.

This entry was posted on Monday, August 25th, 2014 at 9:45 am and is filed under Uncategorized. You can follow any responses to this entry through the RSS 2.0 feed. You can leave a response, or trackback from your own site.