It’s the last day of 2008, so we at Unframed thought we’d look back on some of the stories of the last year that stuck with us.

I really didn’t want to choose a story about LACMA, being the LACMA PR Director and all. Seemed kind of like a cheap move. But months later, I still think of this article by L.A. Times writer Suzanne Muchnic. It’s about the museum’s acquisition of Ed Kienholz’s The Illegal Operation and about so much more as well. My, how times have changed, and for the better…

Like millions of other people around the world, I tuned in for two weeks in August to the Summer Olympics in Beijing. What gave me the greatest pleasure was not Michael Phelps’s eight gold medals or watching professional ping pong in prime time; it was the architecture. For fourteen days and nights, television cameras panned across Herzog & de Meuron’s Bird’s Nest and PTW Architects’ luminous Water Cube. Even Rem Koolhaas’s still-in-progress CCTV Headquarters got its share of blimp-camera coverage, despite having nothing to do with the games. How could we not take the time to marvel at three of the most compelling works of architecture of the year? They were easily as impressive as Michael Phelps. More so, if you ask me. 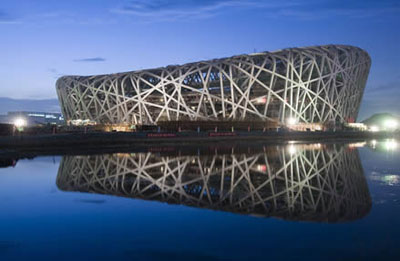 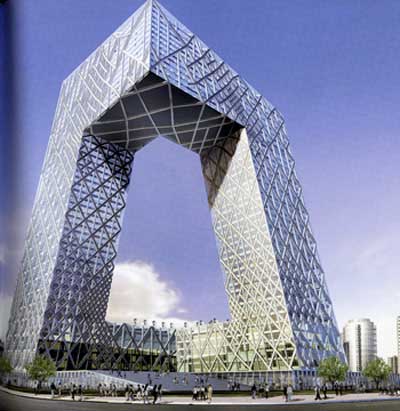 The “if you build it they will come” mentality that led to financial collapse of MOCA is, to our mind, the most critical arts story of 2008. Though MOCA fortunately did not raid its collection to pay bills as has the National Academy of Design, the meltdown of such core practices and principles at public art museums raises troubling questions about stewardship and philanthropy that are a warning and a wake up call for everyone concerned.

We should not let 2008 go by without noting the departure of Robert Rauschenberg, who died in May, at age 82, at his home on Captiva Island, Florida. There are some artists whose existence in the world—just the possibility that they’re out there, working, seeing things—is a comfort, something cool held in reserve, and Rauschenberg was one of them. I remember seeing his Combines show at MOCA in 2006 and reading the wall labels listing the things he made art from (the following are from one work—Untitled, ca. 1954—”oil, pencil, crayon, paper, canvas, fabric, newspaper, photographs, wood, glass, mirror, tin, cork and found painting with pair of painted leather shoes, dried grass, and Dominique hen mounted on wood structure on five casters”). There is a sense of humor and freedom here that will be much missed. Before I go home tonight I’m going to take the escalator up to the Rauschenberg gallery in BCAM for one more look.

Top Ten Films (Plus One)

To me, there seems to be a massive hole atop this list where some kind of singular, monolithic “film of the year” should be (do those even exist any more?). Regardless, here are eleven wonders:

1. The Headless Woman (Lucretia Martel) Put down by some as vacant formalism, Martel’s third effort is a spiral of heightened perception, numbed hallucination, and atmospheric terror. The sound design only deepens the dizziness. 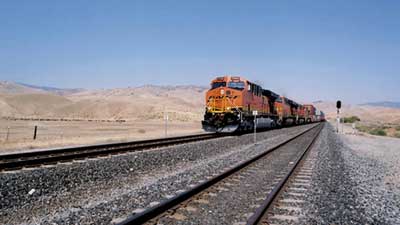 3. Flight of the Red Balloon (Hou Hsiao-hsien) The year’s best French film, courtesy of Taiwan’s master of light and movement. It’s like watching memories being formed.

6. Paranoid Park (Gus Van Sant) Milk may have all the heart, but Van Sant’s earlier 08 effort is a fluid blend of the bravura techniques from his Tarr-inspired reboot and the textures of earlier dreamscapes.

8. Silent Light (Carlos Reygadas) If only for its audacious opening shot and rhyming final take, but also all the earthy, bizarro splendor in-between.

In the City of Sylvia

10. Synecdoche, New York (Charlie Kaufman) Why did the partisans of Southland Tales pan this one? Its complex bitterness nicely counters Kelly’s tart incoherence.

I was stopped in my tracks when I saw the latest installation in the quilt case in the American galleries. The nineteenth-century quilt now on view is astonishingly beautiful and technically amazing—a mesmerizing combination of quilted, embroidered, appliquéd, and stuffed cotton. The red, pink, and green swag border, large floral designs (the “Rose of Sharon”), with their marvelous arabesques of green stems with big red berries, contrast brightly with the patriotic, star, and flower motifs quilted into a background of white squares featuring a variation on the Great Seal of the United States. These all-white dimensional designs are magnificently visible in the raking light of the display case. And the whole quilt stands out dramatically against the gallery’s crimson walls. The title is equally eye catching: Buchanan’s Banner with “Rose of Sharon.”

Buchanan’s Banner was made in 1857 by two sisters, Margaret and Gillian P. Wright, from Monroe County, Missouri, to celebrate the election of James Buchanan as fifteenth President of the United States (1857-61). The quilt begs close examination to discover all its superb details, such as the raised drum and drumsticks and “liberty” banner included with each of the four Great Seal representations that symbolically flank the central “Rose of Sharon” variation like north, south, east, and west cardinal directions. There is an exuberant blossoming energy to the entire design and masterful execution that ironically is at odds with Buchanan’s legacy—his failure to prevent the Civil War. History aside, I would love to know if President-Elect Barack Obama’s upcoming inauguration is inspiring any new American quilts of such extraordinary quality.

Oh, we know the conventional wisdom: that there has to be actual snow on the ground before people can take snow days. But with a little imagination we at Unframed find it possible to take time off if we can simply see snow: in the mountains, in the mind’s eye, or even (this being L.A.) in a photograph from a movie set. So have a good holiday and we will see you back here next week with a flurry of year-end lists and other good stuff.

The rain came last week and a building sprouted on our campus. Well, the beginnings of a building. Here are a few pics of the early stages of construction of the Resnick Pavilion, which will be completed in 2010. This is just one small corner of the building so far—much more will come.

I love watching buildings go up, especially when I get to see it on a day-by-day basis. Every day in 2007 I walked down Wilshire on my way to work, watching BCAM take shape—first the steel beams; then the exterior walls, panel by panel; and eventually, the exterior stairs and escalator. I’m looking forward to doing it all over again with the Resnick Pavilion—especially because this time we’ll have a better vantage point from which to see the saw-tooth roof come together. Already you can see the framework being installed—the frames in piles on the ground all around the building, awaiting their turn to be lifted by crane and put in position. 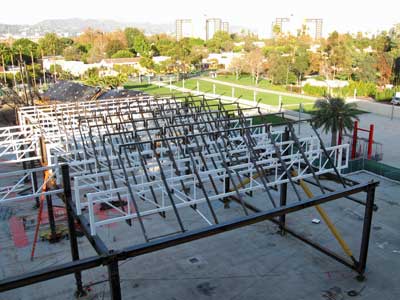 There was some discussion in the comments to yesterday’s post about museum lighting, in which Michael Buitron of Leap into the Void and another reader, Davidsindy, brought up the use of natural light in galleries at the Getty and the Kimbell Art Museum. Likewise, the use of natural light in BCAM’s third-floor galleries is, to my mind, the absolute highlight of that building. If you agree then you have reason to look forward to the Resnick Pavilion’s completion: picture the quality of light and openness in one of those third-floor galleries—then multiply that by five.

For those of you even more obsessed than I with the pavilion’s progress, our Transformation Webcam has been resurrected. See it all in real time! Keep your browser open for the next eighteen months so you don’t miss a thing!