As 2010 closes out this weekend, so too does one exhibition—Eye for the Sensual. It’s last day is January 2, so this weekend will be your last chance to see these beautiful works of European art from the seventeenth and eighteenth centuries. While you’re here you can also see Olmec: Colossal Masterworks of Ancient Mexico, which LA Times critic Christopher Knight named one his ten favorite exhibitions of the year.

In addition to those two, there are also six other special exhibitions on view right now. Take an opportunity to look in on some of the smaller installations we have going on right now, too. The R. B. Kitaj installation is a nice companion to Steve Wolfe on Paper; the  Japanese Abstract Expressionist installation might make an interesting complement to Blinky Palermo and Color & Form in BCAM. Also inside the Pavilion for Japanese Art is The Expressive Brush—paintings created by Zen monks as a kind of medication practice.

Among the modern art permanent collection is a small installation of drawings by George Grosz, the self-proclaimed “saddest man in Europe.” Take the elevator up to the top floor for Yek, do, se (1, 2, 3): Three Contmporary Iranian Artists—Bahman Jalali, Yassaman Ameri, and Samira Alikhanzadeh.

As usual, we have free docent tours every day, so you can also drop in, see what’s on tour, and maybe take in a part of the collection you might not otherwise have visited. Take a chance!

For all the beautiful sculptures that are present in Eye for the Sensual—closing January 3—only two represent the crossroad of science and art.

In the midst of a long tradition of idealization of Greek and Roman mythology, the vestigial longings of a class, there arose a science that documented the conquered and colonized people; and hence ethnography and anthropology or, euphemistically, the science of the “Other.” In an effort to gain a commission from the Ethnographic Gallery of the Museum d’ Histoire Naturelle in Paris, Charles Cordier submitted the bust of Said Abdallah from the tribe Mayac of Darfour, which was successfully shown in the salon.

Charles Cordier, Said Abdallah from the Tribe of Mayac in the Realm of Darfour, 1848, bronze, collection of Lynda and Stewart Resnick

After the success of a strong proud male, three years later he fashioned the remarkably ravishing African Venus, bestowing the bronze’s soft, slightly warm brownish tones, the verisimilitude of her real skin. Her partially open mouth, as if caught before speech, perpetuates her animation in this hard metal.

The pair was shown in the Great Exhibition in London in 1851 (three years after slavery was abolished in France). Queen Victoria purchased the bronzes and eight pairs were cast. They were very popular and copied in many sizes. And though we, today, acknowledge her beauty as exemplary, by nineteenth-century aesthetic standards she was still an alien creature and not unlike the other much exaggerated African Venus, Hottentot, being a physical curiosity and an erotic curiosity. It was a time when sculpture was still based on the neo-classical legacy of whiteness. But that being said, Charles Cordier, later considered to be a key Orientalist, wittingly or unwittingly brings such artistry, honesty, and fidelity—one might even say affection—to the African Venus that no more beautiful sculpture of a black woman has ever been made, that I’ve seen.

The late Hugh Honour, in his master work The Image of Black in Western Art, would quote Cordier late in his career as saying “I was putting a new value into sculpture and creating the study of races, widening the scope of beauty by finding it everywhere.”

One of the nice things about the LACMA blog is the way it takes you behind the scenes of the museum, giving you a look at how exhibitions are put together, what kind of work our talented conservators do, and how our education programs impact students (two of my favorite blog posts this year: an educator interviewed two youngsters who have been coming to Art Camp since they were toddlers, and a Q&A with artist Kerry James Marshall, who was once a kid who came to LACMA for inspiration and is now an artist whose work is in the collection).

If you’ve been reading Unframed all year, then, you have an idea of all the work that goes into making this museum run. But the question remains—just HOW are we able to do all that we do? The answer, of course, is that it all comes from your support.

As the 2010 is coming to a close, I’d like to ask you to consider making a 100% tax-deductible year-end donation to LACMA.

Your gift to the LACMA Fund—even as little as $5 or $10—will support special days and times when the museum is free to the public plus hundreds of lectures, classes, concerts, and films every year. As a father, I’m especially pleased that your donation will help continue LACMA’s incredible free educational programs for kids throughout our city.

I believe strongly in the value of art and philanthropy and hope that, as a lover of the arts, you do too. Please consider making a donation by December 31, 2010.

As part of the museum’s ongoing archives program, LACMA is in the process of revisiting a landmark exhibition of African-American art from 1976.  Entitled Two Centuries of Black American Art, this seminal show is acknowledged as the first comprehensive museum exhibition of African American Art.  My department has been busy describing, documenting, and digitizing key details about this exhibition which will be posted on lacma.org as a service to researchers and the public.

Although the importance of organizing such an exhibition seems like a no-brainer in retrospect, the bitter truth is that it wouldn’t have happened without pressure from three committed trustees—Franklin Murphy, Sidney Brody and Robert Wilson.  In researching the exhibition, it has been a pleasure working with Wilson, who served on LACMA’s board from 1974 to 1985 and was in fact one of LACMA’s first African American trustees.  Recently we visited Robert in his Hollywood Hills home where he generously loaded us down with information and treasures from his personal archives—pamphlets, exhibition promotions, newspaper reviews, and a rare poster.  “I remember the impact this show had in making LACMA a place where the black community knew it was welcome,” he told me.

Robert recounted how the exhibition opened with the customary party on LACMA’s plaza but, meanwhile, the exhibition sponsor Phillip Morris threw a more exclusive dinner across the street including artists, lenders as well as Artie Shaw—with Armand Hammer requesting an invitation!  (Phillip Morris, Artie Shaw, and Armand Hammer—three blasts from the past!)  An essay by Robert documenting the show’s origins will be a part of the upcoming web project.  It is an important first-hand account of a watershed era in black historiography. We’ll let you know here on Unframed when the project is complete. Our many thanks to the indefatigable Robert for contributing his vivid recollections, resources, and enthusiasm.

I have recently returned from several days in Marfa, Texas, where I was privileged to spend time at the Donald Judd Library, now under the stewardship of the Judd Foundation. It was a peculiar experience, being with Judd’s books, without Judd. The presence of the artist was strong; his interests and peculiarities quite pronounced. As expected, there is a large section on contemporary art and architecture; but there is also a substantial collection of French literature, of philosophy, of Asian and Indian art. There are cookbooks, maps, and travel books, as well. His lack of interest in certain things is also revealing—the omissions from the collection were almost as significant as the inclusions. One of the most satisfying parts of the time spent in the library was the physical presence of the books, with the reality of their past life evidenced by their worn dust jackets and the pages of notes and clippings slipped inside the covers.

I had the same peculiar feeling when curator Leslie Jones showed me the screenprints on view in R. B. Kitaj’s Covers for a Small Library. Kitaj enlarged photographic facsimiles of the actual covers of his books, and created beautiful screenprint portraits of fifty of his favorites. 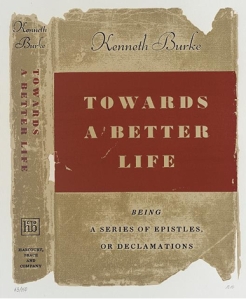 R.B. Kitaj. Towards a Better Life from In Our Time: Covers for a Small Library After the Life for the Most Part, 1969. Screenprint, 31 x 23 in. Los Angeles County Museum of Art, Gift of S. A. Feld through The Martin S. Ackerman Foundation

The artist is no longer with us, but his ineffable presence is strong in these book-portraits. For him, each book triggered memories and had associations for him that were very personal and not necessarily relevant to the book itself. He wrote lovingly about the books he chose, referring to them as “precious source books for painting.” His very personal attachment to the book as an object is reflected in his musing about the “strange life of a real book…” He speaks about “the unexceptional cover montage which is only a front for a bookfull of secret life…” It is the physical object of the book that he handles and loves that gives him the ability to imagine its secret, strange life, to think of it as “the tender, brittle pages of the book of my life.” His prints pay homage to those books, portraying them with their sometimes ragged dustjackets, and the nicks and dents obtained during their secret lives.