As mentioned in a past post, we are currently preparing to present online materials from LACMA’s archive for its landmark 1976 exhibition, Two Centuries of Black American Art.  To accompany the primary exhibition materials that will be digitally accessible for the first time, we have developed related content to provide further art historical and institutional context for this historic exhibition. One feature I’m particularly excited about is the list of works by African American artists in LACMA’s permanent collection—and the fact that those publicly available in collections online can now be found on the landing page for American Art.  Never before have visitors been able to go to one place  to see the dynamic range of African American art in the collection—art produced over the course of more than 150 years in myriad artistic styles. The earliest work in the collection is Robert Duncanson’s striking still life of 1849 and the most recent is Glenn Ligon’s neon Rückenfigur made in 2009, which will be on view as part of Human Nature: Contemporary Art from the Collection, opening in BCAM on March 13. 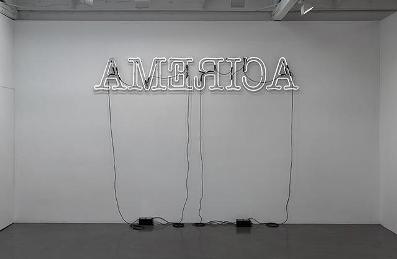 It is amazing to be able to scroll through the images and encounter so many masterpieces, some of which are on view in the galleries—the online object record will tell you if a work is or is not “currently on public view.” From a curatorial perspective as well it is fascinating to see when works entered the museum’s permanent collection. (You can find this information by looking at the accession numbers—the first numbers that appear alone or after an initial letter(s) indicate the year the object entered the museum’s collection.)  Some of my favorites happen to be historic acquisitions.

For instance, the first work by an African American artist that the museum ever acquired was Henry Ossawa Tanner’s Daniel in the Lion’s Den (22.6.3). Mr. and Mrs. William Harrison, whose collection formed the core of LACMA’s American art collection, purchased this beautiful and elegiac painting directly from the artist in 1918 and donated it to the museum in 1922. It has been one of the highlights of the American art collection ever since and is now on view. 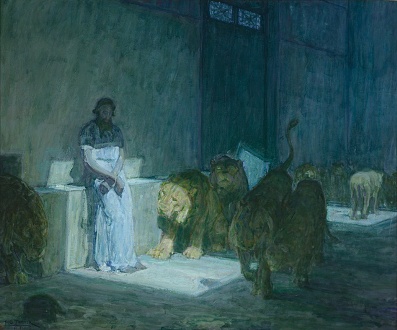 Other landmark acquisitions certainly include David Hammons’s Injustice Case (1970), which will also be on view in Human Nature. Hammons made this powerful work in response to the order by Judge Julius Hoffman to bound and gag Black Panther co-founder Bobby Seale, who was a defendant in the 1969 trial of the Chicago 8, the group charged with conspiracy and inciting riot at the 1968 Democratic National Convention. Hammons used his own body—covered with margarine and graphite and pressed against the paper framed with an actual American flag—to create this unique “body print.” The museum exhibited Injustice Case in its 1971 exhibition Three Graphic Artists: Charles White, Timothy Washington, David Hammons and purchased it with its acquisition fund through Brockman Muse Gallery, founded in Los Angeles in 1967 by brothers and artists Alonzo and Dale Davis. 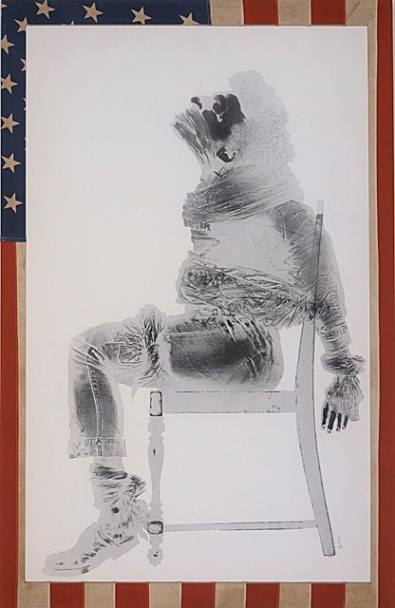 It’s Oscar weekend, and that means L.A. is buzzing with celebrities and gawkers alike. LACMA is not immune. On view in the Resnick Pavilion is Larry Fink: Hollywood Parties, 2000–2009.  These are just any Hollywood parties; for ten years Fink was invited to shoot Vanity Fair’s legendary Oscar parties. Neither documentary nor fanatical, Fink’s photographs capture the small, human moments. 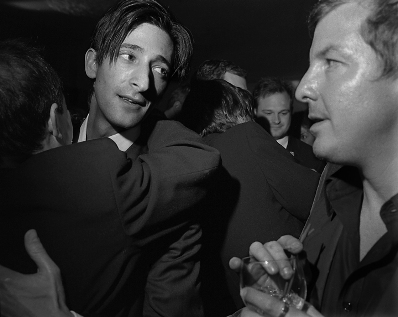 Opening on the top floor of the Ahmanson Building this weekend is the small installation of stunning photographs by Firooz Zahedi, Elizabeth Taylor in Iran. Zahedi accompanied Taylor to Iran in 1976 where they visited ancient Persepolis, Shiraz, and Isfahan. Though Taylor adopted the traditional dress of her surroundings, Zahedi’s photographs show that it was hardly enough to contain her star power. 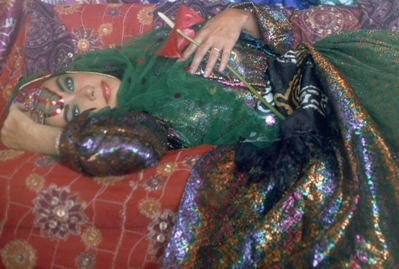 The small screen is also getting some love from LACMA this weekend. Tonight in the Bing Theater we are presenting a selection of the UK’s best television commercials as chosen by top ad execs from around the world. For instance, extreme shepherding:

Tomorrow night our tribute to Jane Fonda comes to a close with 1981’s On Golden Pond, in which Fonda starred with her father, Henry, in his final performance (for which he won an Oscar, as did co-star Katherine Hepburn). The film is followed by Julia, from 1971, a period drama about playwright Lillian Hellman and her childhood friend, Julia. The film stars Fonda alongside Vanessa Redgrave, Meryl Streep, Jason Robards Jr., and Hal Holbrooke.

If you’ve not been bitten by the Oscar bug at all, then come to the museum on Sunday evening for a little respite in the form of the Capitol Ensemble, performing works by Schubert and Brahms as part of the free Sundays Live concert series.

If you visit LACMA’s new Ray’s restaurant once it opens on March 3, you will not fail to notice three vibrant blue and gold textiles stretched out on the wall facing the entrance. The design, called Ogee, features a repeating pattern of interlocking fan-shaped motifs that together form a meandering double-curve outline. This S-curve, known as an ogee, has deep roots in mathematics and architecture, where it formed the basis for the Gothic pointed arch. Here, the ogee expands and reproduces itself in variations giving a sense of movement and rhythm to the fabric surface.

The textile was designed in 1964 by Bernard Kester. This was one year before he began working as an exhibition designer at LACMA—where he still works today. In 1964 Bernard was a ceramics and textile artist who taught design at UCLA, where he had been an instructor for ten years. In 1962 he became involved with an interior design company, Crawford and Stoughton, a small-scale operation with a storefront on a chic stretch of Robertson in what was then known as “Designer Row.” Bernard designed textiles for Crawford and Stoughton on a freelance basis and Ogee came out of this partnership. 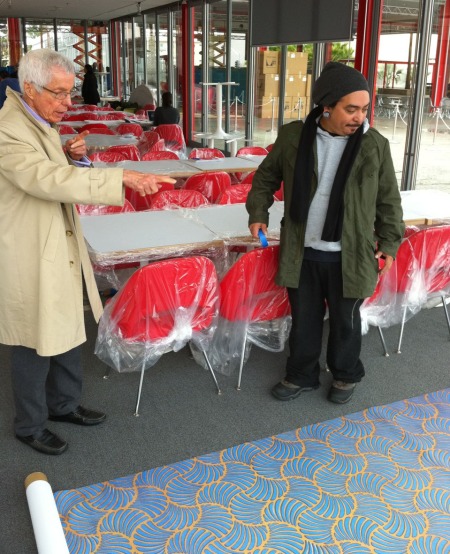 Bernard Kester and Eder Cetina prepare the textiles for installation

Ogee started—as with all of Bernard’s designs—in a sketchbook where he would work and rework an idea to begin his process of visualization. Once he completed this first round of edits, Bernard would then screen print a short textile length by hand. If the final product looked good, the next step was to find a screen-printing shop to produce a full run. The entire process usually took about two months. (In contrast, when Ogee was selected for Ray’s it only took a few days from the word “go” to photograph, color correct, and reprint the lengths needed for installation.)

I asked Bernard if the selection of his textile for LACMA’s new restaurant was a testament to his work’s ability to withstand the test of time. He shrugged: “That’s for someone else to decide.”

Serving in Style on Three Continents 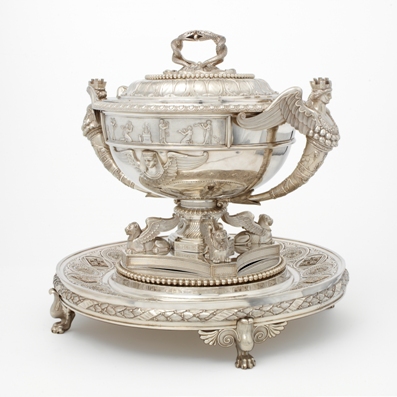 Paul Storr, Large Soup Tureen with Stand (from set of four), 1806–1807, long-term loan from the Rosalinde and Arthur Gilbert Collection on loan to the Victoria and Albert Museum, London

Bursting forth from all sides with entwined serpents, ancient fertility goddesses, and winged lions, this magnificent work by London silversmith Paul Storr vividly expresses Britain’s interest in ancient Greek, Roman, and Egyptian designs in the early nineteenth century. The tureen, one from a set of four, is part of the Gilbert Collection, now on view in the European galleries. Spurred by archaeological discoveries in Pompeii and Herculaneum, the neoclassical style gained prominence during the 1760s, combining motifs, forms, and subjects from classical Greek and Roman vocabulary. With friezes of ancient Greek figures and a winged bust in pharonic headdress, the soup tureen boasts an outstanding eclectic amalgamation of classical ornamentation and Egyptian motifs that flourished following Napoleon Bonaparte’s Egyptian campaign from 1798 to 1801.

Ornament and decoration were not the only things shared between cultures. Here is another soup tureen, yet this one was made in India. Part of the current exhibition India’s Fabled City: The Art of Courtly Lucknow (closing this weekend), this intricately chased and engraved vessel reflects a fluid exchange of stylistic elements between Indians and the many Europeans who lived in the region during the late eighteenth century. 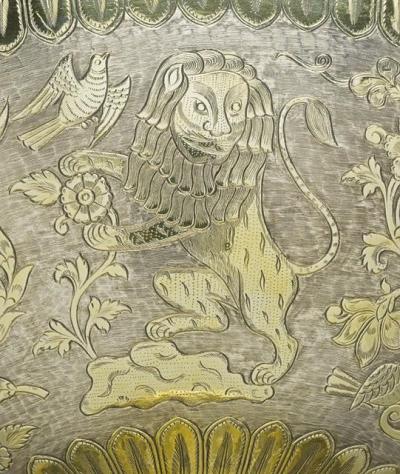 While Lucknow’s rulers adopted Western architecture and collected European decorative arts, European visitors were known to emulate Indian nobility in dress and manners. In the exhibition’s accompanying book, curator Stephen Markel notes that the soup tureen’s heraldic lions relate to European iconography and that the profuse floral decorations interspersed with birds and berries reflect a mature Lucknow style that developed from the more staid and formal floral arrangements of earlier Mughal design.

Samuel Courtauld I, Chocolate Pot, 1750–51, long-term loan from the Rosalinde and Arthur Gilbert Collection on loan to the Victoria and Albert Museum, London

Similarly, in the mid-eighteenth century, European aesthetics shifted from the stately Baroque to the fluidity and exuberance of the Rococo style, as seen in the Samuel Courtauld Chocolate Pot from the Gilbert Collection. In British silver, the Rococo style was often combined with Chinoiserie, a term derived from the French word chinois (Chinese), denoting a type of European art influenced by Asian styles. Eighteenth-century Britain was abuzz with exotic goods from all corners of the world; accessibility was due to European control of the seas and a robust import business.  The unusual and, to European eyes, alien designs issuing forth from the East were a constant source of fascination.  As the mania for imported Asian objects grew in the seventeenth and eighteenth centuries, Westerners began to copy and adapt Asian motifs and forms to their decorative arts. Tea caddies, coffeepots, chocolate pots, and other objects teemed with chinoiserie decorations, indulging the imbiber with scenes of the exotic locales from whence the beverages were imported. Here, the chocolate pot is decorated with undulating Rococo scrollwork and an asymmetrical cartouche, surrounded by exotic fruits and crowned with a peacock.

Peter Archambo, Pair of Tea Caddies and Sugar Box, 1747–48, long-term loan from the Rosalinde and Arthur Gilbert Collection on loan to the Victoria and Albert Museum, London

The introduction of coffee, tea, and chocolate to Europe during the 1650s may have had the greatest influence on both the type and style of silver produced for serving the triumvirate of caffeinated beverages. Before 1700, few Europeans had experienced drinking coffee because of an Arab monopoly that kept prices high. This changed as the Dutch East India Company transported coffee plants to the Indonesian islands, including Java, increasing production and ultimately the spread of coffee as a cash crop. The first coffeehouse in London debuted in 1652; by 1700 there were 2,000 coffee establishments in the city. The interest in tea was no less evident: By 1720, the East India Company had shipped nine million pounds of tea, and by 1750 the export of tea to the West had reached thirty-seven million pounds. 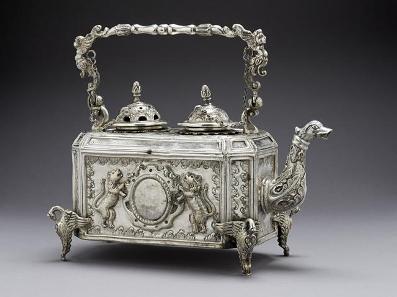 Elaborately wrought vessels for caffeinated beverages were also made in Latin America during the eighteenth century, such as this water heater for yerba maté tea, part of the Cisneros Collection currently on view in the Latin American galleries. In the same vein as the Indian soup tureen, the water heater reflects eighteenth-century Spanish American style, combining indigenous and European styles—notice the rampant lions flanking an oval cartouche. A final crucial link between the Americas and British silver is the discovery of rich silver deposits, especially in Mexico, Bolivia and Peru, which not only supplied local silversmiths, but were also exported to Europe in great quantities beginning in the sixteenth century.

Elizabeth A. Williams, Marilyn B. and Calvin B. Gross Assistant Curator, Decorative Arts and Design

Join us for another popular Target Free Holiday Monday at LACMA. Along with free access to all of our galleries, the day also holds these free activities: