This Weekend at LACMA: Free Saturday, Children of the Plumed Serpent Opens, Free Concerts, and More

It’s a busy weekend at LACMA, not least because we are opening a new exhibition, Children of the Plumed Serpent: The Legacy of Quetzalcoatl in Ancient Mexico. The show features approximately 200 objects dating from the tenth century up to 1580, including beautiful painted manuscripts, ceramics, textiles, and large sculptures.  These are not the Maya or Aztec cultures, but rather a confederacy of kingdoms in southern Mexico (known today as Oaxaca, Pueblo, and Tlaxcala). They were devoted to the deity Quetzalcoatl, whose name translates into “plumed serpent.” The exhibition is currently open to members only, and opens to the public on Sunday. 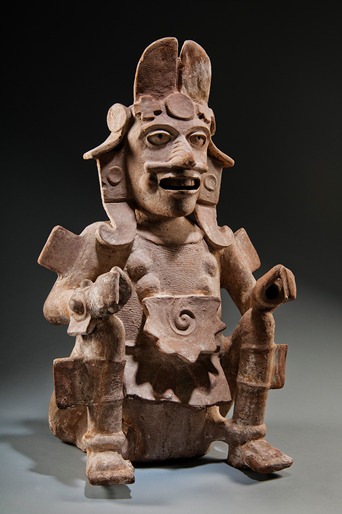 Tonight in the Bing Theater, in conjunction with California Design, 1930–1965, we will screen midcentury cartoons from the United Productions of America (UPA) studio. It was at the UPA where animators experimented with distinctly non-Disney animation styles. Animation historians Jerry Beck and Adam Abraham will be on hand to host the event.

Happening concurrently, author Judith Freeman will read from her work, joined by students and faculty of USC’s Master of Professional Writing Program. The reading is free and starts at 7:30 pm in the Brown Auditorium, downstairs from the Bing Theater.

Saturday marks the official end of the region-wide Pacific Standard Time exhibition initiative, and we’re celebrating along with eighteen other museums by offering free admission all day (excluding In Wonderland). Come see our two Pacific Standard Time exhibitions, California Design and Maria Nordman SMOKE: FILMROOM, 1967–Present. Helping us celebrate California-style will be the Surf City All-Stars, featuring musicians from Brian Wilson’s band and Jan & Dean, who will give a free concert at 5 pm. 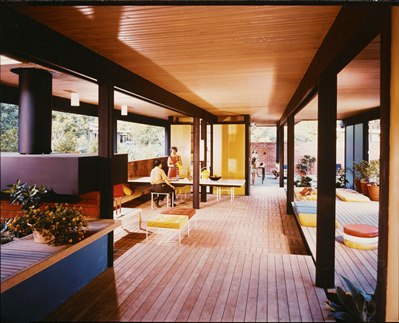 While you’re enjoying your free Saturday at LACMA, be sure to check out Chris Burden’s Metropolis II, exhibitions on Ellsworth Kelly and Robert Adams, and a free lecture about Frida Kahlo’s Portrait of Dorothy Hale (in conjunction with the ticketed In Wonderland, which features a number of Kahlo paintings).

End your Saturday with a screening of the 2008 film Bottle Shock, which depicts the shocking 1976 blind tasting by French judges that resulted in their choosing California wines over French, launching the California wine industry we know today. A Q&A will follow with the film’s producers and representatives from the wineries that received the highest marks at that 1976 tasting.

The weekend of activities continues on Sunday, when Children of the Plumed Serpent officially opens to the public. Kids will enjoy our free Andell Family Sunday activities, while adults may be interested in attending a lecture on the Chinese art market by Tina Zonars and Ingrid Dudek of Christie’s. The weekend concludes with a free performance of chamber works from the Colburn Conservatory Ensembles.

Installation of Children of the Plumed Serpent

Now that the installation is complete, we thought we would give you a behind-the-scenes look at the creation of this major exhibition. 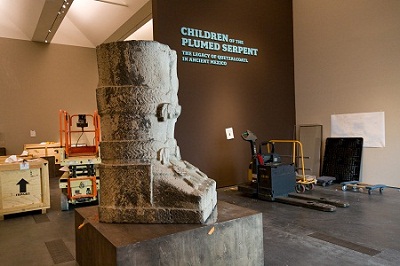 These pair of monumental feet come from the site of Tula. The feet belonged to an atlantid warrior who stood behind the column fragment in the third picture below. 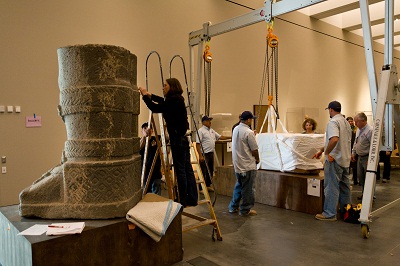 These pair of monumental feet come from the site of Tula. The feet belonged to an atlantid warrior who stood behind the column fragment in the next picture. 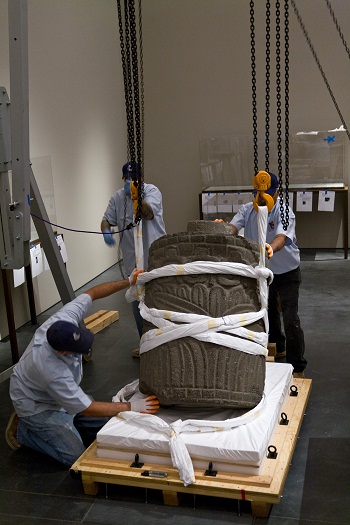 This image shows the installation of a column fragment from the site of Tula. Because of it’s weight, we needed to use a gantry to hoist it upright. The low relief carvings around the column show images of cut shells and feathers, the emblems of Quetzalcoatl. 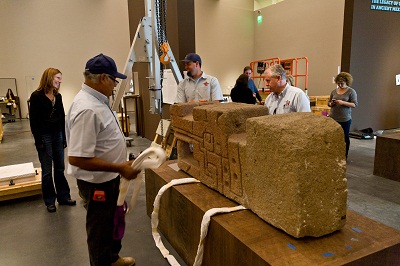 This image shows a monumental serpent sculpture from the site of Cholula. This serpent, excavated a few years ago, was found in proximity to the great pyramid of Cholula. 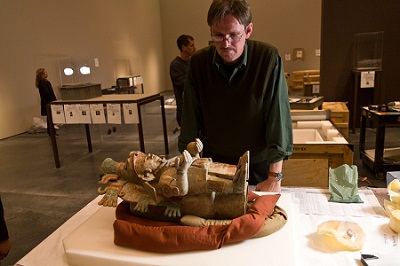 Conservator John Hirx examines an incense burner in the form of Quetzalcoatl from the site of Mayapan.

Curator Victoria Lyall works with art preparators Jordan Measavage and Eddie Diaz to arrange objects in the case dedicated to the rain god. 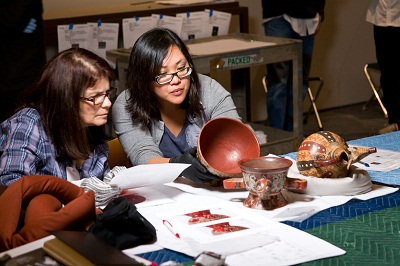 Curator Bertina Olmedo from the Museo Nacional de Antropologia, Mexico, and conservator Lily Doan examine objects after they have arrived from Mexico. 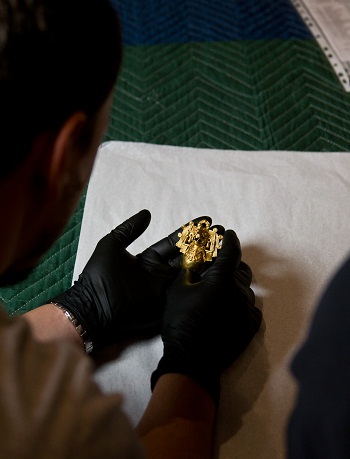 One of the art preparators holding a gold bell recovered from Monte Alban’s Tomb 7 in present-day Oaxaca. They need to examine each piece in the round to devise a mount for it. 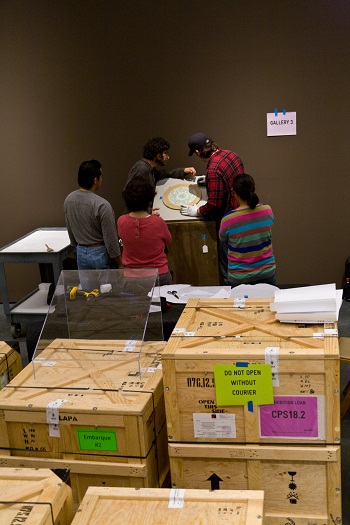 Children of the Plumed Serpent is on view in the Resnick Pavilion beginning this Sunday through July 1. Member preview days start tomorrow and go through Saturday. Be sure to keep checking the blog and LACMA’s calendar for up-to-date listings of all events and programs related to this exhibition and more.

Photographs of the Back Lot 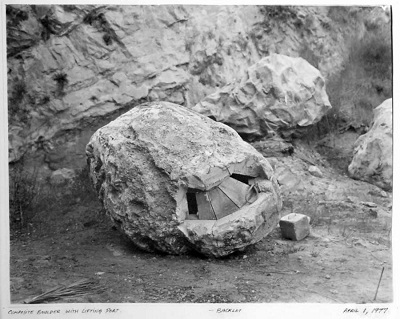 The student was Albert Dorskind, then the vice president of Universal Studios, a passionate photography collector, and an amateur photographer. Seven years after that class, Mr. Dorskind, as president of the board of the Ralph M. Parsons Foundation, was instrumental in persuading Parsons to initiate funds to establish LACMA’s photography department—a matching grant was given to LACMA in 1983 and the department became its own curatorial division in 1984. 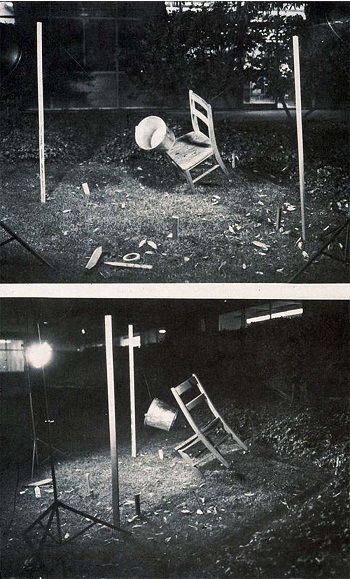 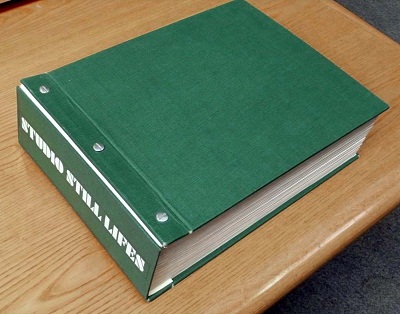 One would think that Ellsworth Kelly’s abstract art was easy, being so casually blissful. And bliss is a quality one could readily associate with the beautifully curated exhibition, Ellsworth Kelly: Prints and Paintings, which is on view in BCAM through April 22. There is this sort of simple clarity, which by its very nature is a kind of misdirection. And for those in the know, it might be there on the face of the work, but for me, I had one of those “doors of perception moments” that made looking at the work feel as if I were seeing it for the first time. And suddenly, and amazingly, it was quite thrilling. 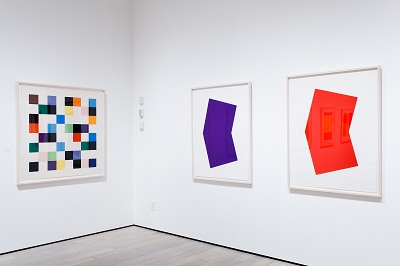 I thought Kelly’s geometry was about geometry. But to me it’s about space—the stuff in between the drawn lines, the transient shadows, the reflections thrown on the floor—the what’s inside the outlines and the perfect color to hold space in check. Not merely apertures that shape the world in this odd way where Kelly is prepared to color, but instead his looking through these shapes with reverence and uncanny wisdom. Kelly, though eighty-eight years old, may well be from the future with an aesthetic purity that empties—or almost empties—the world of things. Nature is there, but only as a gesture. 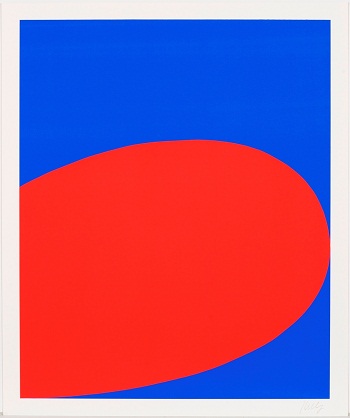 If cyberspace had a realization, surely it would appear somewhat like Kelly’s universe where the portmanteau of geometry and biomorphic nature collude to give us “biomorphic geometry” in vivid, saturated spectrum. This compelling fusion crystallizes in the prints, for it may be that the medium meets its perfect form or the perfect form meets its ideal medium. Bright and joyous, the prints seem to suggest Kelly disentangling the intrinsic connotations from mere visual clichés, bringing the image closer to nature’s amoral fauna display, like a bed of flowers. I feel that the colors lay together, intimate like lovers with their charm and vitality—pure eye candy. And as if the lights had gone out, he darkens the cascade of color, and then black elegantly assumes all the roles. And if viewed, prosaically, he harnesses the energy in these extraordinarily large curves, something like the arc of a windshield wiper or the slices of succulent melons sometimes graphed on a triangle-cut space, trapped as incomplete moons, orphans of that perfect shape: the circle. 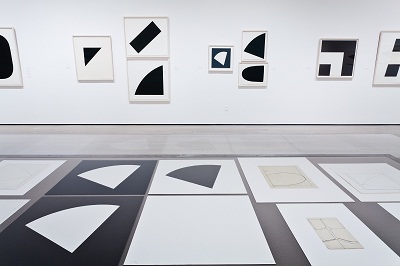 You would think by now that with the shapes, the intense colors, and the sheer abundance of its consumer cousins, there would be nothing left to say. And yet, viewed without the constant labels—those imposing words—they are set free and live in the realm of ideas and wonderment. So very different from Kandinsky’s and even Malevich’s abstractions, while nonetheless using somewhat the same elements, Kelly seems to purify them, release them of any associative melancholy neurosis or the dense dreamscape scaffolding or any apparent atavistic urge.  That is not to say that the past didn’t inform him or to deny that a twelfth-century stained glass window wasn’t a form of inspiration.  Nor is there any over abiding theory of perception, a Gestalt, a big reality superimposed on the painted object. Maybe it’s just the looking—the existential moment itself and the pure glamour of color. 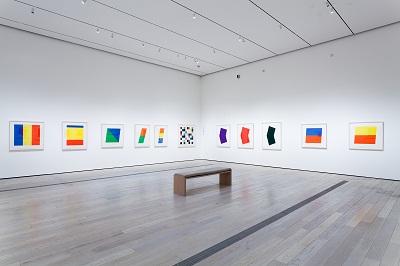 And in that sense Kelly is utterly visceral, inside of nature and perhaps looking out, maybe devising avenues of escape but never being more than what they are: apertures, windows, shadows, and infinite interplay with infinite possibility—the cosmic touch.  But, of course, there is the meditation on the perpendicular, our most human need, architectural in its understanding. Here Ellsworth Kelly is relentless. 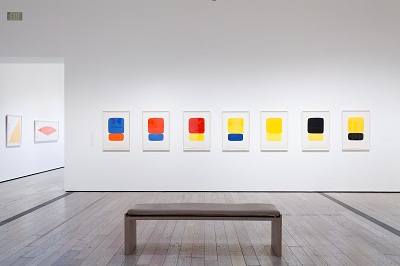 There’s something quite haunting in these majestic rectangular pools of color with their luminous squares, curvaceous sweep of hot, boldly interfacing and intermingling personalities constantly jockeying for position of dominance. And within the heat and vibrancy, the grand question of the white wall, the other framing, the would be vacuum, the grand negative—this apparent empty space that goes on suggesting that it is always in play, an abiding reality of his art, for it is always “a room with a view.”

If you’ve seen In Wonderland: The Surrealist Adventures of Women Artists in Mexico and the United States, you know that the exhibition opens with a film by the Maya Deren,  the great avant-garde filmmaker. Friday night in the Bing Theater we will be dedicated to Deren. Starting at 7:30 we will screen all of her completed shorts, including Meshes of the Afternoon (shot in Los Angeles) and The Very Eye of Night, as well as The Witch’s Cradle, an unfinished collaboration with Marcel Duchamp. These will be followed by the 2002 documentary In the Mirror of Maya Deren, which includes outtakes from her films, interviews with her peers, and archival footage of Deren herself discussing her life and work.

You may as well get comfortable in the Bing, because starting Saturday at noon we will once again screen Christian Marclay’s The Clock for its full twenty-four hours. The screening is free from noon Saturday to noon Sunday, first come first served. (A word of warning: the late night hours tend to be popular, so expect a full house leading up to midnight and plan your visit accordingly.) If you’re hungry, Ray’s will be open late on Saturday night to accommodate all you Clock-watchers—’til 2 am. (Our new neighbors, For Your Art, will also have donuts.) 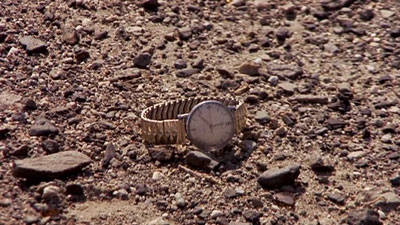 Outside of the Bing, we’ve got plenty of exhibitions to see, starting with the aforementioned In Wonderland, as well as exhibitions on Ellsworth Kelly and Robert Adams, among others. The latter two are both in BCAM. This weekend also marks your last chance to see the works on view on the top floor of that building, including Jeff Koons’ Balloon Dog and Cracked Egg (Red). Those works have been on view since BCAM’s opening in 2008, and we are deinstalling the gallery to put some new works on display later this summer. 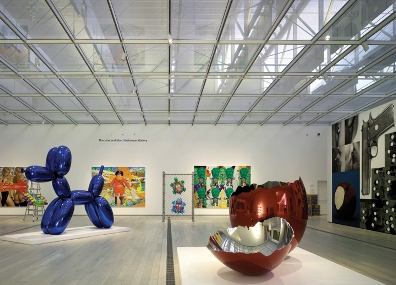 Sunday as always is a great time to bring the kids for Andell Family Sunday art-making activities. Learn about quilt-making and textile art and check out the small exhibition Common Places: Printing, Embroidery, and the Art of Global Mapping. 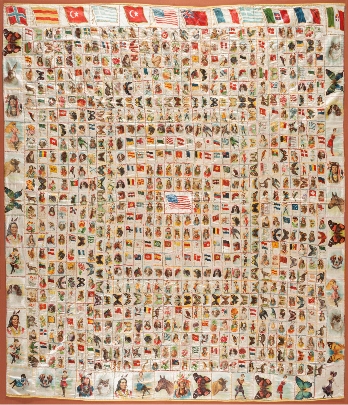 Finally, close out the weekend—where else?—in the Bing Theater with a free concert by countertenor Slava Kagan-Paley.