I was discussing the upcoming Art of Two Germanys/Cold War Cultures show with modern art research assistant Dorothea Schoene when I noticed something rather unusual on her office shelf. 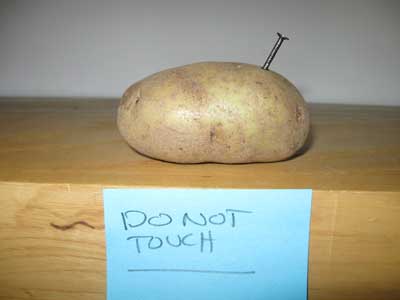 Yes, this is an impaled potato. No, you are not to touch it. The potato is part of a conservation experiment to determine how long it takes for a nailed potato in an artificially lit space to sprout. Since Art of Two Germanys includes Sigmar Polke’s Potato House Object (1967), and as neither the potato farmer Dorothea is working with nor the conservation team know how long it will take for sprouting to occur under such circumstances—the guess is four to six weeks—they set up the test you see here. (Sprouting is the goal, by the way, as it represents the artist’s intent to find a humorous symbol for creativity and growth.) The result of the LACMA team’s investigation will be evident when Potato House Object, pictured below, goes on view January 25. It features about 350 potatoes, hopefully perfectly sprouted, affixed to wooden grids that together take the shape of a three-walled house. 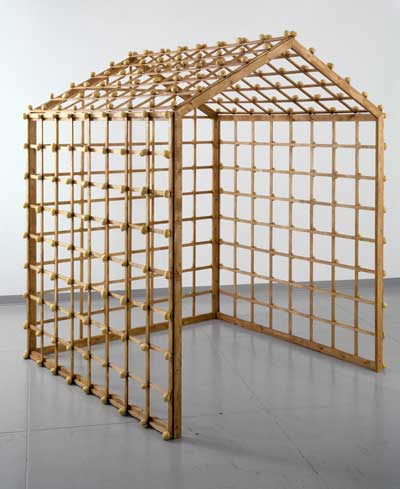 This entry was posted on Monday, December 15th, 2008 at 6:19 am and is filed under Uncategorized. You can follow any responses to this entry through the RSS 2.0 feed. You can leave a response, or trackback from your own site.