The Influence of Japanese Art on Colonial Mexican Painting

Before Contested Visions in the Spanish Colonial World closes in just a couple of weeks, I wanted to share some of my favorite pieces. It may come as a surprise to some, but the relationship between Japan and Latin America dates back to the seventeenth century.  Japanese folding screens were first introduced to New Spain as exports by way of the Manila Galleon trade and by Japanese embassies that brought them to Mexico as gifts in the early decades of the seventeenth century. Known in Spanish as biombo–a Portuguese and Spanish transliteration of the Japanese word for folding screen, byōbu–the Mexican artform was inspired by its Japanese prototype. The versatility of the folding screen contributed to its quick adaptation to daily life; because the biombo was freestanding, portable, multi-paneled, and could be painted on both sides, it provided an ideal surface on which to paint. Biombos transformed spaces into definable spaces, and were indispensable elements in domestic interiors. Today, folding screens are such an ubiquitous part of everyday life frequently used to divide rooms and spaces, as they were originally intended.

The unique and innovative format of the folding screen provided new ways for artists to depict subject matter. It differed from the usual format and iconography of an altarpiece, devotional painting, or portrait, and was intended for domestic use. Freed from the constraints of the Catholic Church, artists experimented with the genre of secular art and utilized the full artistic potential of the folding screen.

The folding screen was a favorite format for the depiction of historical scenes. On view in the exhibition is a remarkable example of colonial painting that depicts the conquest of Mexico on the front, and the viceregal capital of Mexico City on the back. Various scenes of the conquest play out over the ten front panels, among them the meeting of Cortés and Moctezuma, the siege of the Aztec capital of Tenochtitlan, and the assassination of Moctezuma. The artists’ incredible attention to detail in the rendering of the human figures and their elaborate costumes invites the viewer to linger over each scene on the screen.

On the back of the screen, the transformation of the Aztec capital into the orderly Spanish colonial city replete with the city’s numerous churches and plazas invites the viewer to meander among the streets, searching the legend at the bottom left for familiar sights within the city’s boundaries. 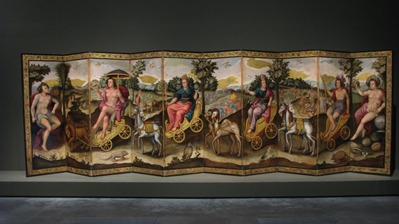 The second folding screen on view in the exhibition includes allegorical depictions of the four continents as women riding golden chariots, flanked by the mythological figures of Ceres and Flora. Before the “discovery” of America, Europeans imagined the rest of the unknown world to be inhabited by Amazons, cannibals, and other unimaginable creatures. America, the second figure to the right, is pulled by unicorns, fantastical beasts, and behind her is a scene of indigenous cannibalism, an obvious reference to the misconception of the lack of civilization in the Americas. 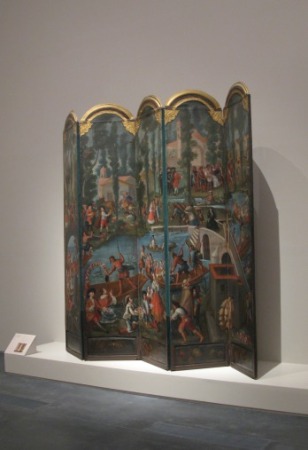 The last folding screen in the exhibition portrays a slice of daily life in colonial Mexico. This scene takes place in Ixtacalco, a village in the environs of Mexico City known for its canals, canoes and verdant landscape that served as a respite from the hectic pace of the viceregal capital. This remarkable example of eighteenth century painting provides the viewer with a glimpse into the leisurely activities enjoyed by the various social classes of colonial society. In the upper right, an indigenous couple celebrates their wedding, revelers in flower-laden canoes enjoy music performed by musicians, and a family sits along the banks of the canal enjoying a meal.

The paintings on the back of this folding screen were unbeknownst to us until after the exhibition design was complete. The paintings depict Indians performing various activities, women, children and various examples of local flora and fauna. It was a delightful discovery!

This entry was posted on Thursday, January 12th, 2012 at 10:30 am and is filed under Latin American Art. You can follow any responses to this entry through the RSS 2.0 feed. You can leave a response, or trackback from your own site.