In 2005, in preparation for impending construction at LACMA, the B. Gerald Cantor Sculpture Garden was deinstalled. As we recently told you, we’ve been in the process of moving the sculptures—ten Rodins and three Bourdelles—back to their rightful home. They’re now on view, along with a few new additions from Robert Irwin, who has reenvisioned the space and introduced his palm garden into the area.

Though at first the palms, icons of L.A., might seem out of place with French sculpture, Irwin says it’s a time-honored pairing. When working on his plans for the garden, he presented LACMA staff with an old photo of Versailles that captured palms in the summertime alongside the palace. The French felt palms were to be treasured and they brought the trees out of greenhouses in warm weather to introduce an exotic element to the grounds.

Just out of the greenhouse into our own sculpture garden—a selection of Bromeliads, shown below. 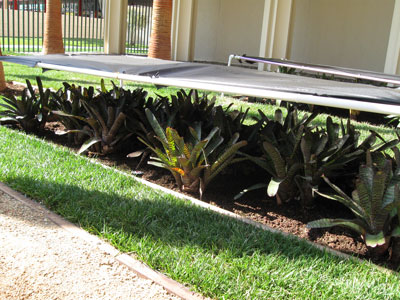 They’re still covered as they have been living indoors for the past year and need to become acclimated to their new environment. Over the next three to four weeks they will gradually be exposed to more sun for their good health and welfare until finally the shades come off entirely. More on the sculpture garden on Monday from John Bowsher, director of special art installations, who helped Robert Irwin realize his vision.

This entry was posted on Friday, April 17th, 2009 at 6:00 am and is filed under Uncategorized. You can follow any responses to this entry through the RSS 2.0 feed. You can leave a response, or trackback from your own site.