Today, a few behind-the-scenes photos from the installation of Olmec: Colossal Masterworks of Ancient Mexico—one of the Resnick Pavilion’s inaugural exhibitions opening October 2.

Hand painted onto the exhibition’s walls, this portion of a mural portrays a Maya dignitary carrying an Olmec-style baby, who represents the infant maize god.

A royal figure dressed in an elaborate bird mask and ornaments form another mural. The zoomorphic throne may allude to ceremonies that occurred when the figure acceded to office. 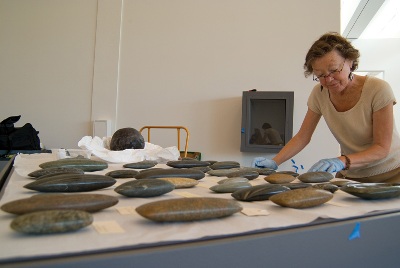 Curator Virginia Fields examines a rare collection of objects that were recovered from a sacred site in the Olmec heartland. The greenstone axes, symbolizing ears of maize, were planted in formal arrangements at the site of a spring, signaling the importance of water to this agricultural society.

Another offering from the site—a life-size wooden bust, which survived because of the bog-like environment.

A crew installs a throne, which portrays an Olmec-style composite creature with both human and animal features.

Moving one of two large platforms, designed by artist Michael Heizer, into place, which will hold two colossal portrait heads. 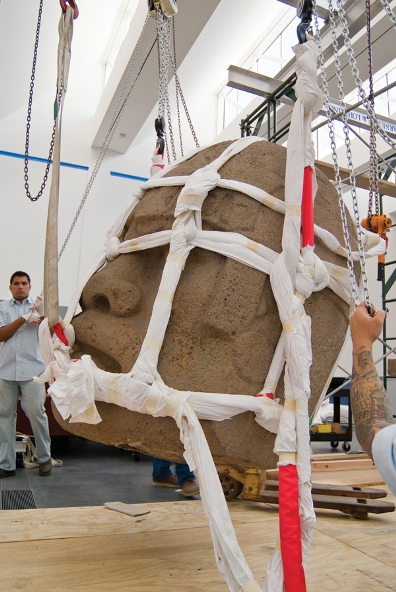 Olmec monumental heads are individual portraits of some of Mexico’s earliest kings. Since the 1860s, seventeen colossal heads have been recovered.

A chart in the gallery conveys the relative scale of the seventeen known heads, which range in weight from around seven to twenty tons.

A cross-legged ruler from one of the towns under the hegemony of San Lorenzo. 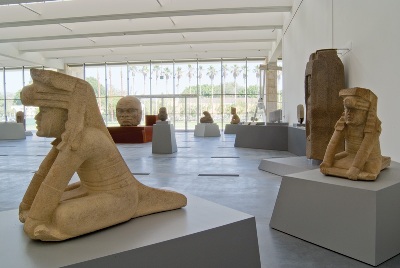 This entry was posted on Tuesday, September 14th, 2010 at 8:52 pm and is filed under Uncategorized. You can follow any responses to this entry through the RSS 2.0 feed. You can leave a response, or trackback from your own site.