Entering the Public: Representations of Women in the Work of Newsha Tavakolian

I attended a lecture by Nazila Noebashari, owner of Aaran Gallery in Tehran, when I first started my internship for the Art of the Middle East department here at LACMA. Aaran Gallery is a participant in Iran’s burgeoning contemporary art scene. Noebashari spoke about many artists, including Newsha Tavakolian, who began her career as a photojournalist before establishing herself as an artist.

Newsha Tavakolian, Untitled from The Day I Became a Woman series, 2009, purchased with funds provided by the Farhang Foundation, Fine Arts Council, and an anonymous donor, © Newsha Tavakolian

Intrigued by the powerful presence of women depicted in Tavakolian’s work, I decided to focus my senior honors thesis on her series The Day I Became a Woman, from 2009. Born in the United States to Iranian émigrés, I find that exploring the work of Iranian artists, particularly women, provides me with a glimpse of what my life could have been like had my parents remained in Iran. My investigations satisfy my curiosities for a life I never lived.

I was elated when I discovered that LACMA acquired a total of four photographs from The Day I Became a Woman and Listen, from 2011. The former series documents a mandatory modern puberty ritual in Iran known as jashn-e taklif, which acknowledges the beginning of a young girl’s transition into adulthood, much like Judaism’s Bat Mitzvah or confirmation in Christianity. It is important to note that this ceremony, however, was first introduced after the Iranian Revolution of 1979 and is not necessarily a longstanding Islamic tradition, nor is it deeply rooted in Iranian culture. 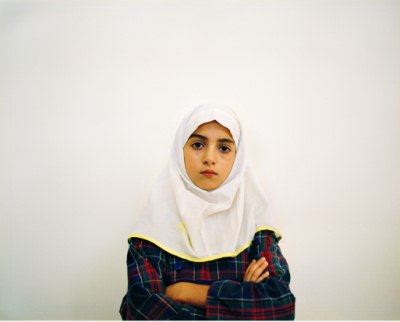 Newsha Tavakolian, Untitled from The Day I Became a Woman series, 2009, purchased with funds provided by the Farhang Foundation, Fine Arts Council, and an anonymous donor, © Newsha Tavakolian

The two images acquired by LACMA show the protagonist of the series, Romina, before and after her ceremony. Upon seeing the two works, gallery visitors see a physical change: Romina goes from holding a doll and wearing a revealing pink ballerina outfit to wearing modest clothing, which includes a mandatory hijab. In the Listen series, Tavakolian photographed six professional Iranian women singers and created fictional album covers. In postrevolutionary Iran, many talented artists are rendered voiceless as women are banned from solo performances in public. Unlike other images in this series, which show women singing, the photographs on view in the Islamic galleries feature a young woman standing in the middle of an empty road as well as in the sea.

At first glance, the two sets of photographs seem unrelated. I find that they are in dialogue with each other. Both of these women must be mindful of their actions in public. They also have to protect their reputation because it not only affects them, but also their families. Before knowing that curator Linda Komaroff was interested in these specific photographs, I asked Tavakolian in an interview whether she saw a connection between Romina and the young woman in the Listen series. Tavakolian explained that Romina is “the childhood of the woman with boxing gloves” (of course, not literally). The post-ceremony Romina and the young woman in Listen are incredibly similar in that they both appear defiant, confident, and confrontational, with a hint of vulnerability and melancholy in their expressions.

The modest Romina faces the camera with her arms crossed, a departure from the relaxed, innocent Romina we see pre-ceremony. The bright-red boxing gloves worn by the woman in Listen tell us that she’s ready to fight. In the next photograph, she stands with her back against the crashing waves of the sea. Rather than fall over from the force of the water, she is strong and unaffected—Mother Nature herself cannot disturb her.

The West has a tendency to see Middle Eastern women as oppressed, uneducated, and in dire need of liberation. Representations of strong, fearless Iranian women, as seen in Tavakolian’s work, break down these false stereotypes. (If only these images could reach a greater audience outside of the museum’s walls!) Despite the numerous setbacks women in Iran face, they still remain fierce warriors. Women are a majority in universities, are commonly the heads of their households, are active in political demonstrations, and are leaders in many industries, particularly the arts, which is a highly venerated field in Iran. Newsha Tavakolian herself, who is rapidly becoming one of the most significant artists to come out of Iran, is a testament to the fact that Iranian women have agency and a certain level of autonomy. The Day I Became a Woman and Listen showcase the tenacity and resilience that often characterizes Iranian women at home and abroad.

This entry was posted on Monday, August 12th, 2013 at 1:32 pm and is filed under Photography. You can follow any responses to this entry through the RSS 2.0 feed. You can leave a response, or trackback from your own site.