I am at LACMA on a Wednesday drinking Earl Grey tea and eating a fistful of sugar cookies; the museum is closed. I watch the gardeners prune the large palm trees in front of BCAM; palm fronds scatter across the sidewalk. I’m here for a study day and walk-through of the John Altoon exhibition with other artists. We take the Barbara Kruger elevator up to the second floor of BCAM and situate ourselves in the first room of the exhibition. I look around. Some of the paintings are familiar, but most are new to me. Despite his premature death of a heart attack at age 44, Altoon produced a plethora of work. 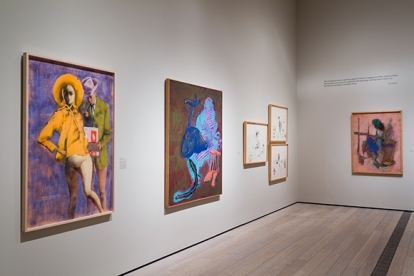 Altoon’s practice, especially evidenced in the works in the first room, varies in style and technique, as if the artist was sampling a variety of ideas, trying on many different approaches to see what stuck. We see elements of Abstract Expressionism in a number of his paintings, highly rendered fictional magazine advertisement drawings, and cartoonish works on paper. 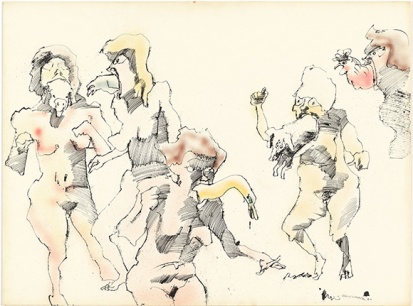 Carol S. Eliel, the curator of the exhibition, begins the day by discussing how the exhibition came together by framing Altoon as an “artist’s artist.” Highly regarded and respected by other artists, the lineage of Altoon’s practice has been passed on to the subsequent generation of artists. We see this throughout the exhibition wall quotes as well as in the catalogue, texts by contemporary artists such as Monica Majoli, Monique Prieto, and Laura Owens, who each wrote about the influence of Altoon’s work on their own.

During the study day, we learned from Eliel that Altoon’s archive was not well maintained, and much of what we know about his life and practice has been passed on by his colleagues. I sit in the room during the conversation and listen as others share their experiences with Altoon’s work as well as any personal relationship they had with him. Through these different stories, I get a clearer picture of what Altoon might have been as an artist and a person. Arguments were made and disputed—everything from his intentions in using the female form to whether or not he wore striped pants. Some spoke about Altoon as a draftsman or as an illustrator. Others argued that his paintings were not “successful.” I watch as all these artists assert their positions and, through Altoon, position their own relationships to painting.

John Altoon in his studio, ca. 1968. Image courtesy of and © Joe Goode

“Was he a feminist?”

“Well, he was friends with Judy Chicago.”

“Yeah, but that was before she was a feminist herself.”

As the conversation moves into the third gallery, I am struck by one painting in particular: Untitled (F-8), 1962–63, which, for the purposes of this text, I will call “Woman in Yellow Coat.” The work is a large portrait painting of a bourgeois couple standing together. The woman is at the center of the frame, taking up two-thirds of the image, pushing to the side the man in a green jacket and cowboy hat, who holds a box of cigars. She stands there in a dark yellow raincoat and a large rain hat, which is tied around her short blond hair. Both are naked from the waist down. The presence of this painting reminds me of Alfred Hitchcock’s Vertigo (1958), in which Kim Novak’s character is supposedly haunted by a painting of her great relative, Carlotta Veldez. The character goes and sits in a museum every day, mesmerized by her own image—she’s supposedly dead. The painting stares back at us, making us, the viewers, aware of its presence. The painting taps into the history of San Francisco and the manner in which a city and its history are mythologized, shared through folktales like ghost stories.

Staring at “Woman in Yellow Coat” I’m reminded of a comment that art historian Jeremy Gilbert-Rolfe made about a conversation he had had with John Baldessari, who said that no other artist was more influenced by Altoon than Mike Kelley.

Kelley is also mentioned twice in the Altoon catalogue, once by Paul McCarthy, who shared conversations he had with Kelley about Altoon, as well by Eliel, who indicates that Kelley owned and collected Altoon. Looking at “Woman in Yellow Coat” I immediately think of Mike Kelley’s 1983 video The Banana Man. This work is currently on display as part of the Mike Kelley retrospective at MOCA Los Angeles.

Kelley’s costume contains a similar hat and jumpsuit, though his outfit covers his entire body. The fabric is lined with white zippers along the suit as well as with a long, white handkerchief that sticks out from the crotch like a large, flaccid penis. I remember seeing The Banana Man over 10 years ago and thinking that Kelley’s character was based on the namesake of Gilligan’s Island, a floppy character who is the show’s comic relief, constantly knocking things over and accidentally destroying others’ belongings. Kelley often plays the clown in his videos, a grown-up child not capable of dealing with adult responsibilities. He too scared to deal with his own sexuality, simultaneously driven by and terrified of his own penis.

According the Electronic Arts Intermix, which houses the video, Kelley states, “the Banana Man was a minor figure on a children’s television show I watched in my youth. I, myself, never saw this performer. Everything I know about him was told to me by my friends. The Banana Man is an attempt at constructing the psychology of the character—problematized by the fact that the character is already a fictional one, and by the fact that none of my observations were direct ones.”

Another character constructed through the passing of information from person to person. What is the Banana Man but merely an archetype, a collection of other characters such as Harpo Marx, Charlie Chaplain, and Harold Lloyd, morphed into one clown? We see many archetypes throughout Kelley’s other video work: Dracula, Santa Claus, etc. Each of these figures is a cultural form we already know.

As I recall Kelley’s yellow suit, I first think of the white handkerchiefs. Throughout the video, he constantly pulls them from both the front and back of his costume like a magic trick. I’m also reminded of gay hankie, a common tool in the 1970s for gay sex cruising. Different colored handkerchiefs stood for different sexual proclivity: white meant masturbation (the color representing semen). Kelley mentions his own semen in the video as he pours table salt across the screen. He uses these hankies to clean the mess from his over-sexed libido. The Banana Man’s costume does quite fit Kelley and droops off of his body, as if he was wearing “daddy” clothing. This is much different from Altoon’s yellow raincoat, which is quite form fitting, made for the subject’s body. I’m reminded of Uma Thurman in Kill Bill Vol. 1, running around slaying her enemies in a fitted yellow jumpsuit. 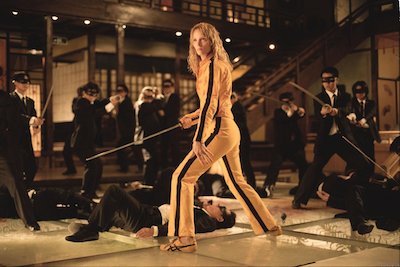 While Altoon’s subject’s torso appears naturally posed, her lower nude half looks uncomfortable—legs are twisted and turned as if a comfortable stance is elusive. While the half-nude male subject of the painting is tucked into the background, the female’s body is completely exposed. She stands there looking outward, addressing the viewer. Her nudity reminds of me of a Vanessa Beecroft performance, in which spectators are confronted by the reality of the live nude female form.

In The Banana Man, there is a constant struggle between Kelley’s gender identification and gendered power. Although he always uses a male pronoun to identify himself, he fluctuates in performing highly gendered tasks. As man, he identifies as an “average guy” who is paid a low wage for his labor, performing the role as a blue-collar worker. We see him lust over the female body, wanting sexual gratification. This is quite similar to Altoon’s works on paper, in which we see castrated, anthropomorphized penises attempting to seduce fully drawn female bodies.

As female, Kelley performs the role of mother, one seen in multiple characters, from the martyr dressed up as angel feeding the other performers garbage to the pregnant woman trying to deliver a baby to Lady Liberty. As mother, he even plays a pregnant female dog, as he circles around a yellow carpet in his underwear stating that his character has developed a kidney infection mistaken for pregnancy. Without child, he thinks his dog toys are puppies, and he both caresses and humps them. Does Kelley want to be Mother, or does he want to be like Norman Bates in Hitchcock’s Psycho (1960). Does he see enchantment as the only means through which to hold on to Mother? If his male characters are impotent, his women are barren. Kelley performs a miscarriage by standing over a bucket and releasing potatoes from his between his legs, which stands in for stillborn babies. Throughout The Banana Man there is a constant shift between the representation of the phallus versus the representation of the vaginal. His jumpsuit pockets are consistently penetrated by off-screen hands, only to reveal that they are also barren or merely filled with garbage.

Yellow is a symbol of both pleasure and decay in the video. While the viewer is seduced by Kelley’s candy-colored suit and the idea of the sweet taste of the banana, Kelley also reminds us that yellow is the color of jaundice. In both Altoon’s and Kelley’s work, the body is in a state of decay: for Altoon the images are scribbled together, half-formed figures struggling to maintain shape, while in Kelley’s fluids are pouring and leaking out of the body as the character’s physicality begins to fall apart he loses a grip on his mental stability. In their lives, both artists struggled with mental illness. Altoon was diagnosed with schizophrenia in his late 30s and suffered from depression and paranoia, and Kelley who took his own life in 2012. Mental anxiety is apparent in both their works: in Altoon’s through the rapid pace that his pen takes across the paper, the automatic drawing that reveals the artist’s subconscious; and in Kelly’s through the subject of emotional trauma.

I’m at the Egyptian Theatre at FilmForum with a big bucket of popcorn watching Kelly’s video Extracurricular Activity Projective Reconstruction #36 (Vice Anglais), from 2011. In the video, four figures tie up a woman dressed in white, laughing at her and whipping her over until she bleeds. Three of figures are male and the fourth is female. She does not participate in these actions but watches closely with amusement. These scenes take place in what appears to be a cave, similar to a Beckett play, a no man’s land in limbo. Though the video is absurd, at no point does it apologize for its violence. At the end, the bride is not untied, she lays there covered in blood exhausted by her torture. We sit in the theater watching this violence onto the female body. The theater is quite silent during this screening, with the occasional awkward laugh. Each of us wonder with whom is Kelley asking us to identity in this violence. With whom does Kelley identify?

This entry was posted on Wednesday, July 23rd, 2014 at 10:05 am and is filed under Uncategorized. You can follow any responses to this entry through the RSS 2.0 feed. You can leave a response, or trackback from your own site.