Magnificent Octahedrons Get Dusty Too

Passing through the Ahmanson Building atrium the other day, I came across senior conservator John Hirx in his lab coat. He was slinging what, from afar, looked like Buddhist prayer flags over Tony Smith’s monumental Smoke. The multicolored pieces of cloth dangled from the 8-sided modules that make up the sculpture, which rises 24 feet into the air. John explained that he was dusting the piece.

Conservation technology at LACMA is state-of-the-art science; one prominent project (Watts Towers) includes a method utilizing “a 10% solution of Paraloid B72 in Toluene”, and it’s not unusual for conservators to speak this kind of Vulcan. But John got his materials at Pep Boys auto parts shop. He was proud to let me know that all three types of cloth included in his homegrown dusting apparatus came in a single jumbo pack for just $3.99. He attached them using a sewing machine in the conservation storage lab, and intended to wash them afterwards in the lab’s own washer/dryer.

Mark Gilberg, director of the conservation center, hastened to point out that the three types of cleaning cloth included in the Pep Boys jumbo pack do have just the right unique physical qualities required to dust the monumental work of art: a smooth chamois, a soft terry of medium texture, and a shaggy number with long fibers.  This combination of textures designed for washing your car just happens to be perfect for cleaning the painted aluminum surfaces of Smith’s masterpiece.

Join Us in Watts

Down at Watts Towers, a LACMA conservation team has been assessing Simon Rodia’s monument for several months. The team is working on an inventory of detached ornaments that have fallen from the Towers over time; securing loose or endangered elements; performing a thorough condition survey of the lower part of the monument; researching appropriate conservation materials, and monitoring cracks, to name just a few of their current activities. Part archaeology, part scientific inquiry, part artistic investigation, their meticulous work is fascinating to behold; they are getting to know the Towers inch by inch.

Here’s a short video interview with senior scientist Frank Preusser and one of his team, Sylvia Dorsch, about one aspect of the work: the way they monitor cracks in the monument.

If you’re thinking of visiting the Towers, join us in Watts this Saturday. LACMA, in conjunction with Slanguage Studios and Watts House Project, is hosting a party to celebrate Possible Worlds. Meet up there, or catch a free shuttle from LACMA, leaving from the BP Grand Entrance at 1 pm (no reservations, first-come basis). Make art, listen to poetry and music by DJ Cheebo, and enjoy this LA landmark.

The Engineer Who Saved Watts Towers

One evening last month I drove to a neighborhood near Otis College to visit Bud Goldstone and his wife Arloa in hopes of retracing Bud’s long history with the Watts Towers.  To give you a sense of Bud’s relationship to Simon Rodia and Towers, he is the proud owner of Rodia’s gas fitter pliers, which the artist used to build his sculptures!

In order to understand what all of that means, I sat in their kitchen enjoying Bud’s passion for the history of the Towers. Trained as an aeronautical engineer Norman J. “Bud” Goldstone had been in Los Angeles for about ten years when he read an article in the paper about Rodia’s sculptures. Bud was “not so impressed by the towers” and, at first, didn’t get caught up in their artistic mastery; it was more that the published quotes by his colleagues—other engineers—were to his way of thinking just not accurate. He felt that the engineers “didn’t know what they were talking about,” and he wanted to see for himself what was going on. It was this desire for professional accuracy that first urged him to drive to 107th Street in South Central to see what these monuments were about and what the engineers were saying. Ultimately, he saw ways in which he might make a contribution to the project.

Bud had no idea that this first visit would eventually lead to a lifetime of devoted advocacy and work for Simon Rodia’s environment. Made of concrete, metal, and miscellany, Bud discovered what he likes to call “a three-dimensional doodle.”

During our visit Bud didn’t spend much time talking about his decisive action in 1959 that ultimately saved the Towers and was the primary reason why they are still standing today (recounted in more depth in The Los Angeles Watts Towers). Set by the City of Los Angeles Building and Safety Department for demolition in 1957, by 1959, a grassroots effort was growing to save the Towers. Because Bud had engineering expertise he was pulled into the effort, which comprised artists, community members, students, and activists. On October 10, 1959 a load test was conducted in front of more than 1,000 people; the experimental stress test used 10,000 pounds of pressure to pull down the Tower. The tower bowed, but did not fall, before the truck and the beam involved with the test started to bend and bow. Witnessing that the Towers were not going to be destroyed, the city defined the test a success for the Preservationists. Engineer Bud was the hero of the day!

Bud told us when the Building and Safety Department voted for the load test, fifteen were against and sixteen were for it.

Bud had the honor and distinction, he said while we sat in his apartment, of meeting the artist, Simon Rodia (1879–1965). Bud recalls taking him to dinner on two occasions and that Rodia was “wonderful,” “lovable,” and that the two of them “had a ball together.” I will remember my evening with Bud and Arloa in a very similar light!

The Stockings Were Hung in the Exhibition with Care

Pair of Woman’s Stockings, Europe, 1700–1725, purchased with funds provided by Suzanne A. Saperstein and Michael and Ellen Michelson, with additional funding from the Costume Council, the Edgerton Foundation, Gail and Gerald Oppenheimer, Maureen H. Shapiro, Grace Tsao, and Lenore and Richard Wayne

It’s hard to believe that these flashy, red hose on display in Fashioning Fashion were modestly kept hidden under ladies’ skirts. We can see how they were worn from the racy work of the eighteenth-century English artist William Hogarth. 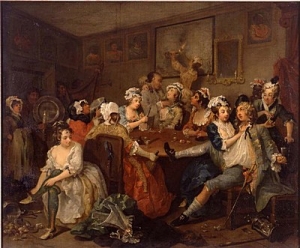 LACMA’s stockings, as beautiful as they are, showed signs of their 300-year-old age. They had holes and several long unsightly runs in the knit that were in need of treatment. To address the problem, I proposed re-looping the knit to close up the runs. 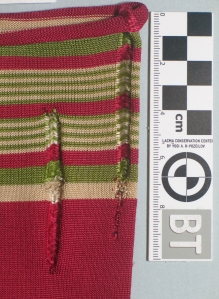 With such a fine gauge knit (approximately 10 stitches per centimeter by 12 rows per centimeter), I used a magnifier, a 0.75 millimeter crochet hook, and size ‘0’ entomological pins for the “operation.” The various yarns were sorted and the knit pattern was re-established. Surprisingly, the cream-colored yarns were very deteriorated, so new threads were added to stabilize the knitted structure. 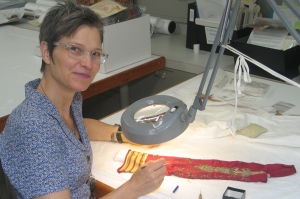 Detail of the procedure

The back seams tell us that the stockings were first knitted flat on a frame and later seamed. 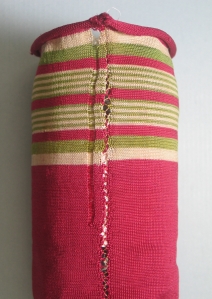 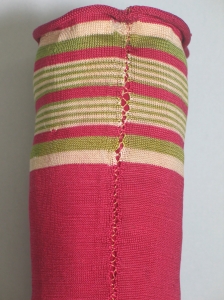 Fastening the delicate stockings to the wall of their display case involved a variety of fastening techniques. We looped silk ribbon around the knee areas to suggest garters. Our mountmaker constructed several unobtrusive supports to hold the weight of the stockings. Look closely at the toes, arch and ankles.

Safely hung, the stockings are ready for Santa—or at least for holiday visitors.

Detail of socks on display mount

This late-nineteenth-century album cover, intricately carved in India, was crafted from fragrant sandalwood. When acquired, the outer section of the front edge was missing. This visual distraction kept most viewers’ eyes from being fully engaged in the artistry worked into the wooden cover.
My challenge was to make the album cover look more unified with a carved replacement for the missing section. On a “restoration difficulty” scale of 1 to 10, this was a 10!

Before conservation treatment. The entire outer section of the front edge, on right, was missing.

Challenge #1: Finding the Right Material
I hoped to use a plank of sandalwood for the replacement, but after an intense search, came up empty. Sandalwood was a very desirable wood in past centuries but is now very, very scarce. Instead I experimented with several hardwoods, finally selecting Koa wood from Hawai’i for its similar color, grain pattern, and ease of carving.

Challenge #2: Making the Template
Work began by carefully making cardstock templates. Using calipers to measure for each row and design series, I drew reference points and pattern lines to ultimately replicate the original designs of the existing album cover on the template. The designs were stretched or shrunk to fit the template and, finally, on the Koa wood itself.

During treatment. Calipers were used to compare the sandalwood original with the Koa wood replacement for accuracy.

Challenge #3: Tiny Tools for a Tiny Job
Next, I tried to purchase tools small enough to reproduce the tiny carvings, but was unsuccessful. I resorted to altering a few tools, including a mini scalpel blade, 1.5mm u-gouge, paring chisel, and 3mm gouge with skew chisel edge. I used a 7X magnification loupe as I worked row by row.

During treatment. The Koa wood replacement was carved with modified miniature tools.

Challenge #4: Finishing the Project
When the carving was complete, the Koa wood was cut to length with precision angles, and mortises to lock into the album cover. The next step was to apply a thin layer of shellac to seal the Koa wood surface. After drying, I applied a chestnut-toned water-base natural dye and watercolors onto the shellacked surface, toning to blend with the original album cover

After treatment. The carved Koa wood replacement was fit in place with mortises and toned to match.