Decorative Arts from the Gilbert Collection Return to LACMA

Now open in the Ahmanson Building are two newly reinstalled European art galleries displaying a number of LACMA’s decorative arts that have long been in storage, plus a representation of extraordinary works that are part of the Gilbert Collection. Through the generosity of The Rosalinde and Arthur Gilbert Foundation and Lady Marjorie Gilbert, and with collegial support from the Victoria and Albert Museum, the installation presents fifty outstanding works of silver and gold, Italian mosaics, and gold boxes interspersed among our permanent collection of European paintings and sculpture.

A collection of decorative arts now housed at the Victoria and Albert Museum in London may seem to have little to do with the city of Los Angeles, but it is here that the collection was formed. Although Arthur Gilbert and his wife, Rosalinde, had planned to retire when they moved to Los Angeles in 1949, Gilbert was attracted to the city’s burgeoning real-estate business and quickly proved to be a savvy developer. His professional successes and artistic passions formed the basis of what would become one of the largest collections of decorative arts amassed by an individual. The collection now comprises more than eight hundred extraordinary works acquired over the course of forty years, beginning in the 1960s. Gilbert was a LACMA trustee for many years, and a number of treasures from his collection were on view at the museum. Seeing these objects on long-term loan from the collection—plus a number of generous gifts and promised gifts from Gilbert’s second wife, Lady Marjorie Gilbert, who lives in Los Angeles—brings the Gilbert Collection’s journey full circle. 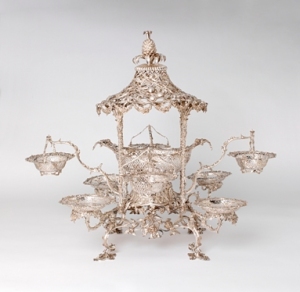 Thomas Pitts, Epergne, 1763–64, long-term loan from the Arthur and Rosalinde Gilbert Collection on loan to the Victoria and Albert Museum, London

Gilbert first started collecting British eighteenth and nineteenth-century British silver. Similar to the composition of the collection as a whole, the Gilbert works of silver and gold displayed at LACMA are mainly of British origin, but Arthur’s interest in Continental silver is also evident, specifically in objects from France, Italy, and Russia. The British pieces in the collection on view at LACMA were fashioned mainly for domestic use and span the late seventeenth to early nineteenth centuries, such as the Thomas Pitts epergne, which would have been filled with exotic fruits and sweets and placed in the center of the table during the dessert course.

Upon first glance, the designs on this gold box may appear to be painted or enamels. A closer look reveals that the head of Bacchus is composed of thousands of tiny pieces of glass in myriad hues, called tesserae. Known as micromosaics—a term coined by Sir Arthur Gilbert—this technique derives from ancient Roman and Byzantine mosaics. The invention of micromosaics dates to 1775, and the finest examples can contain more than 5,000 tesserae per square inch. The Bacchus gold box is one of two micromosaics from the Gilbert Collection believed to have been selected by sculptor Antonio Canova (1757–1822) for presentation to Napoleon from Pope Pius VII during his attendance at Napoleon’s coronation in 1804. A generous gift to LACMA from Sir Arthur’s second wife, Lady Marjorie Gilbert, it was the first of its kind purchased by Gilbert and was one of his favorite pieces. 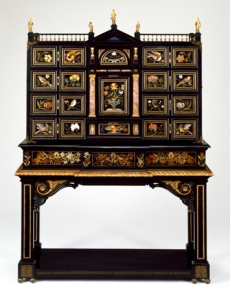 Arthur Gilbert’s discovery of micromosaics, works made mainly in Rome from small pieces of glass, led to his interest in pietre dure (hard stones), decorative designs formed with semiprecious stones that fit together so tightly, the seams are barely visible to the eye. Although Florence was the seventeenth-century center of production for pietre dure pieces, the art form descended from ancient Roman floor and wall mosaics. Gilbert pursued both forms of Italian mosaics in tandem, ultimately amassing a collection of more than three hundred micromosaics and pietre dure pieces, including secular and ecclesiastical plaques, jewelry, gold boxes and furniture, such as the seventeenth-century cabinet from Florence. 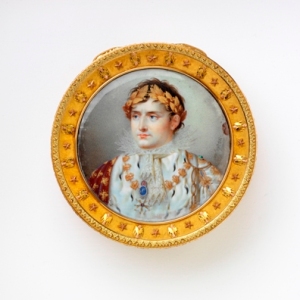 By taking a pinch of snuff from a gold box, wealthy aristocrats could signify their taste, status and wealth in a single gesture. The display of a gold box also showcased the talents of the designers and various craftsmen who were commissioned to create these magnificent status symbols. These small treasures are masterful examples of the luxury arts that goldsmiths, jewelers, and miniature portrait painters of the era produced. While gold is the main component of the boxes, the examples exhibited at LACMA incorporate an array of exotic and precious materials from around the world, including rock crystal; precious stones; Japanese lacquer panels; enamelwork; and glazed figural, landscape, and portrait paintings.

The miniature portrait gold box of Napoleon Bonaparte I is a stunning combination of an exquisitely rendered portrait by French painter Jean-Baptiste Isabey, and a tour de force of goldsmithing. Napoleon is depicted as an official icon, shown in the coronation regalia he wore when he crowned himself Emperor Napoleon I. The blue pendant with an “N” that Napoleon wears relates to the golden “N” set on a ground of blue enamel on the base of the box, and radiating trophées d’armes composed of three tones of gold encircle the base. 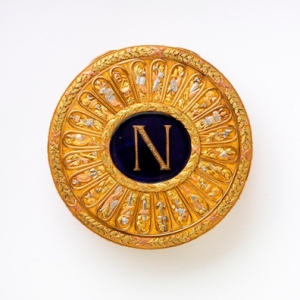 Elizabeth Williams, the Marylin B. and Calvin B. Gross Associate Curator of Decorative Arts and Design

This entry was posted on Wednesday, January 12th, 2011 at 6:00 am and is filed under Uncategorized. You can follow any responses to this entry through the RSS 2.0 feed. You can leave a response, or trackback from your own site.