As a consequence of LACMA’s current loan exhibition of Indian art to Mexico and Chile, the South and Southeast Asian Art Department’s flagship gallery of South Asian sculpture needed to be reinstalled because many of the stellar works displayed in the gallery are now in the traveling exhibition. This was a welcome opportunity, as the gallery (located on the top floor of the Ahmanson Building) had last been reinstalled in 1998 and would benefit from an updated presentation. With so many of our Indian treasures out on loan, it would have been impossible to organize the works in a comprehensive geo-chronological manner. Instead, I decided to arrange them thematically and focus selectively on aesthetic masterpieces and new acquisitions. Here is a peek at just a few of the objects now on view in the reinstalled gallery. 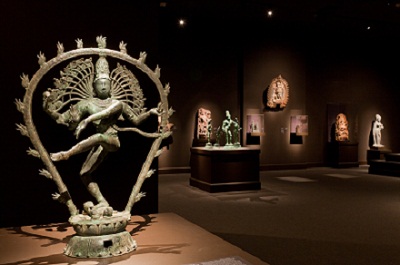 The South and Southeast Asian Art Department’s signature work is The Hindu God Shiva as Nataraja, the Lord of Dance. This south Indian processional bronze (indicated by square holes on the base that were used to tie it to a mobile platform) is one of only a small handful from the tenth century that survive with an elliptical aureole of flames.  Most extant bronze images of Shiva dancing are embellished with a round nimbus, which was the style from the eleventh century onward. While the circular halo may be more apt for symbolizing the cyclic nature of time in Indian philosophy and cosmology, the ovoid shape of LACMA’s bronze is a much more dynamic form that helps convey the animated movement of the cosmic dance.

Immediately to the right of the gallery entrance is an object that is simultaneously a new acquisition and an old friend. The late-fourth-century sandstone Shivalinga (emblematic shaft personified by the mustachioed face of Shiva) was bequeathed to LACMA last year by our beloved late trustee Yvonne Lenart. This extremely rare and early representation first graced LACMA’s galleries in 1978 in the exhibition The Divine Presence: Asian Sculptures from the Collection of Mr. and Mrs. Harry Lenart, and it was generously pledged as a promised gift in honor of LACMA’s twenty-fifth anniversary in 1990.

One of LACMA’s most charming works, the ivory sculpture of Krishna, the Butter Thief is a delightful portrayal of the Hindu god of devotion as a pudgy infant joyfully holding two balls of butter that he has mischievously stolen from the churn to his mother’s amused consternation.

Another new acquisition generously donated by long-time LACMA patrons Charlene and Sandy Kornblum, the wooden sculpture of The Hindu Goddess Kali is a tour de force of intricate carving. The goddess is bountifully adorned with ornate jewelry replicating the spectacular gold jewelry that was the fashion of the day. Note in particular the dramatic earrings: one depicts the head of a lion, the other an elephant. Kali is endowed with eight arms, each holding either a weapon or an attribute symbolic of her fearsome power. Such projecting parts are exceedingly rare in surviving sculptures from Kerala (a modern state of southern India) because the jackwood in which they are carved is extremely soft and especially susceptible to erosion from the heavy rainfall of a tropical climate.

There are many more wonders to behold in LACMA’s new South Asian Sculpture Gallery. I invite you to come see for yourself and don’t be afraid to linger.

This entry was posted on Wednesday, February 8th, 2012 at 6:30 am and is filed under Uncategorized. You can follow any responses to this entry through the RSS 2.0 feed. You can leave a response, or trackback from your own site.