As a curator of costume and textiles, my eyes are in constant search mode for exceptional objects to add to LACMA’s collection. But on rare occasions a treasure appears that requires neither inquiry nor pursuit, which is exactly what happened when I was contacted by Reverend George F. Woodward III, rector of Saint Edmund’s Episcopal Church in San Marino.

Since the fifties, Saint Edmund’s has been graced with an eighteenth-century altar frontal—a decorated textile, usually large, hanging on the front of the altar. After contacting both the Huntington Library and the Victoria and Albert Museum in London, the Reverend had decided that the piece needed to reside within a museum to ensure its preservation and exhibition for generations to come, and he wanted LACMA to be the recipient of the church’s donation.

I must admit I wasn’t prepared for such a marvelous sight when I went to examine the frontal, and quite literally gasped at the intense color of the silk thread and the lavish encrustation of gold and silver! This was the hallmark of professional embroiderers, skilled in “painting with the needle,” who created magnificent textiles and vestments for powerful ecclesiastical patrons in the seventeenth and eighteenth centuries. 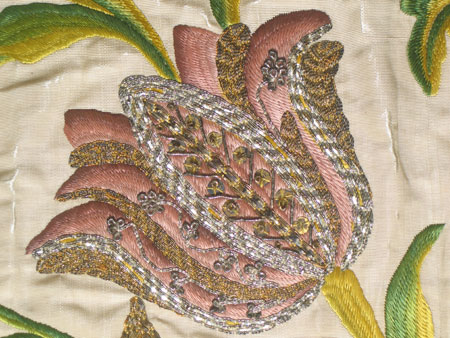 This altar frontal was most likely made for a church in northern Italy about 1730–40, but virtuoso artisans worked throughout Europe for royal and aristocratic patrons as well; embroidered silks were in great demand for fashionable dress and the decorative arts. The vibrant colors produced by new advances in dye chemistry, and Europe’s developing fascination with gardening and exotic blooms imported from Asia, made floral motifs the most widely used embroidery designs. The science of botany fascinated scholars and laymen alike; skilled needle workers manipulated hundreds of shades of colored silk thread into both fanciful and highly naturalistic flowers that reflected the gardens and bowers of country houses and grand estates.

How fortunate we are that Saint Edmund’s chose to donate its exquisite, yet imposing, altar frontal—more than nine feet in width—to LACMA’s collection. It will be a star in an exhibition of eighteenth and nineteenth century dress opening in the fall of next year.

This entry was posted on Wednesday, July 8th, 2009 at 6:00 am and is filed under Uncategorized. You can follow any responses to this entry through the RSS 2.0 feed. You can leave a response, or trackback from your own site.